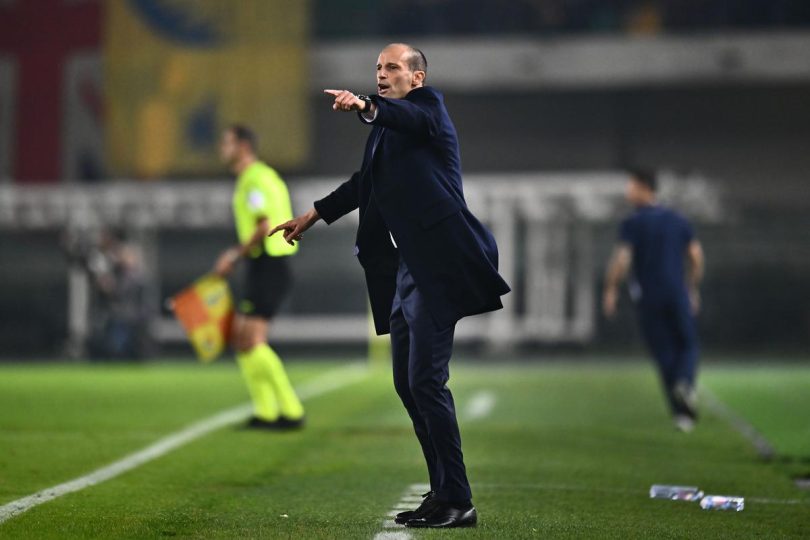 One important person stands to potentially benefit from the latest Juventus scandal that has sent shockwaves throughout the football world.

Juventus coach Massimiliano Allegri’s job was seemingly at risk less than two months ago, with the club struggling on the field, but the Bianconeri’s off-the-field problems could give him more power at the storied Italian club.

Juventus is back in crisis mode following the resignation of club president Andrea Agnelli and the team’s entire board of directors on Monday following an investigation by Turin prosecutors into alleged false accounting.

More than ever Juventus needs stability on the field, which might cement Allegri’s position and even give the coach more influence when it comes to transfer decisions.

“We count on him and on the whole squad to continue to win as they have shown to be able to do in recent games, keeping our objectives high on the field.”

Elkann is the chief executive of Juventus’ holding company Exor and also the cousin of Agnelli, whom he appointed as Juventus president in 2010.

“The resignation of the Juventus board of directors represents an act of responsibility, that puts the interests of the club first,” Elkann said.

“I want to thank my cousin Andrea for giving us extraordinary emotions, which we will never forget. In these 12 years we have won so much. The credit is mainly his, as well as the women and men who achieved memorable goals under his leadership.”

Juventus has already named Elkann’s right-hand man Maurizio Scanavino as its new CEO, while Gianluca Ferrero is expected to replace Agnelli at the helm of the club.

Exor said in a statement that it will nominate Ferrero when the rescheduled shareholders meeting takes place on January 18 to choose a new board.

“Ferrero has a solid experience and the necessary technical competence, as well as a true passion for the Bianconeri, which make him the most suitable person to cover the role,” it added.

Fans clamored for former Juventus great Alessandro Del Piero to be named as new president but Elkann has opted for figures he hopes have the technical know-how to steer the club through the chaos and fix the financial situation.

But that figure could be even higher.

At the start of the pandemic, Juventus said 23 players agreed to reduce their salary for four months to help the club through the crisis. But prosecutors claim the players gave up only one month’s salary.

Prosecutors have been investigating since last year whether Juventus cashed in on illegal commissions from transfers and loans of players. The case is also exploring if investors were misled with invoices being issued for non-existent transactions to demonstrate income that in turn could be deemed false accounting.

The case involves player contracts, transfers and agent dealings between 2018 and 2020.

While sports authorities initially dropped their inquiry into Juventus’ alleged false accounting, the Italian football federation prosecutor has since requested documentation from the Turin authorities leading the investigation — meaning that Juventus could risk a huge fine or even being penalized points in Serie A.

That could potentially derail Juve’s bid to qualify for next season’s lucrative Champions League — something that seemed back on track after a bad start to the season.

Juventus won only two of its opening nine Serie A matches while it was also eliminated from the Champions League but Allegri has managed to turn things around. His side won six straight in the Italian league before the break for the World Cup to move up to third in the standings, although the four clubs immediately below are within four points of the Bianconeri.

Serie A resumes on January 4.