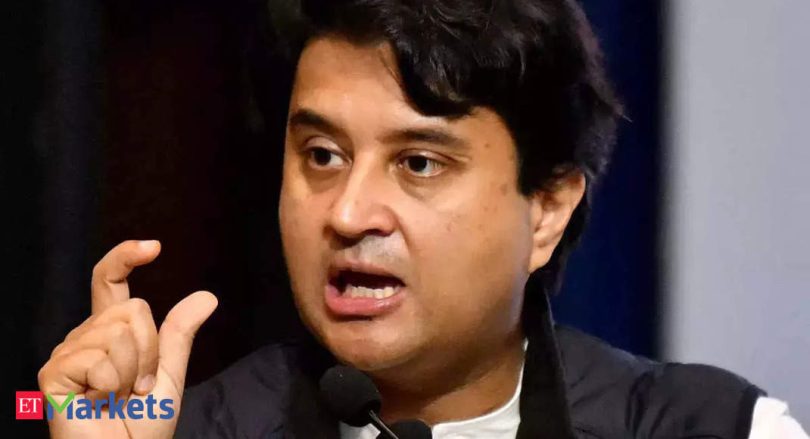 “India has to be powered by both the public sector and the private sector. Our public sector companies have a very ambitious programme in terms of capacity expansion – be it or any other company and they will partner in this ambitious programme that we have to go from 150 million tonnes per annum capacity to 300 million tonnes capacity by 2030,” says steel minister Jyotiraditya Scindia.


Let us understand the timing of the steel duty rollback, what prompted the ministry to consider this at a time when globally one cannot decisively say that the inflation fears are behind us?
When I took over in July, the first thing that I did was to set up two advisory committees; one for the integrated steel plants and the other for the secondary steel industry. We then went through a very thorough process of deliberations in both committees and a process of multiple iterations on what are the factors that will contribute to steel pricing both on the raw material side of iron ore and coking coal, the price trends of both of those as well as on the issues of finished products what the import parity prices are internationally and what are the concerns with regard to seasonality.

Like civil aviation, the steel industry is also going through an up-and-down cycle in terms of demand. The monsoon season is down time for steel demand because in monsoon, most construction pretty much shuts down. So, we went through a very thorough deliberative process and through that process, working not necessarily as a regulator but more as a collaborator and facilitator which is what I believe our role is.

In the steel ministry, we worked through many sensitivity analyses and then I had promised them that we will take a decision in November once the festive season starts and we will look at what happens to price trends both on the commodity side as well as the finished product side. We then had a series of meetings within the government with the home ministry, the coal and mines ministry and then with the commerce and industry ministry and finally with the finance minister about 10-12 days ago and then we took a holistic view that the time has come now to lift the export duties on all nine HSM codes for finished steel products including the two stainless steel – 7219 and 7222 – as well as looking at the raw material end for less than 58 iron ore for zero level of export duty as well as for pellets removing the 45% to zero.

So it is a considered decision taken by all arms of the government together with all the stakeholders within the steel industry.

If international steel prices go higher and if there is a concern of inflation coming back, could this decision be reconsidered?
Coking coal prices have gone from $600 to $300, they have shed almost 50%. Iron ore prices have come off almost 25-30%. Finished products of steel have come off by 22-25% across all nine HSN codes. If you look at the global scene, the pricing is also driven to a great extent by demand and global demand has gone through a downturn due to the fear of recession across a number of economies.
Therefore there is a sluggishness on the pricing front as well. Even the largest producer of steel today, which is China, has seen demand coming off to a great extent and therefore the only silver lining across the global stage is India where demand has crossed double digits. This has been historic and therefore the Indian steel industry has been shored up to a huge extent by domestic demand.

I do feel that the export markets where Indian steel has a footprint, definitely need to be retained because customer acquisition is the most expensive part of a value strategy. The second most important part is customer retention. Certainly the customers that our steel companies have acquired must be retained in a global international scenario and though removal of this export duty even in the current environment may not yield dividends in the immediate or short term, I am very confident that our companies will regain their international footprints in the medium term.

Steel companies in the last financial year reported record profits. profits reported were comparable to . It was extraordinary when you considered imposing these steel duties, I am trying to understand perhaps the extraordinary profit was a consideration which prompted the government to impose these duties?
You have to understand that the steel industry is a cyclical industry and it goes through cycles of crests and troughs. However, you also have to understand that steel is not a finished product; it is not even an intermediate product. It is the initial product which then flows into a bevy of downstream industries, starting from civil aviation to automotive to white goods to FMCG to engineering goods to capital goods across the length and breadth of any economy and therefore steel forms the turning point of any economy moving and therefore if there is an inordinate amount of increase in that initial product pricing, that has a huge effect across all sectors of the economy.

That must have been the consideration when the export duty had been put in place on May 22 looking at the inflationary environment and it is dividends in terms of the numbers both in terms of fall in prices of raw materials as well as fall in prices of finished steel. Therefore today, six months down the road was the right time to lift these export duties and allow our steel companies again to regain their footprints internationally.

You will appreciate the spirit of my next question which is that there were two sectors which had extraordinary profits last year because of global market conditions — steel and the oil and gas sector. On both these sectors, a duty was imposed by the government which now has been rolled back. The messaging from the government may be that these are windfall profits which need to be taxed and the government perhaps does not want India Inc to have extraordinary profits.
I think you are way off mark here, I do not think the connectivity has to do with the profitability of any particular industry. It has to do much more with reining in and controlling inflation and especially with regard to commodities that have a cascading effect on the mainstream of the economy across multiple industries.

The global manufacturing sector is shifting whether it is China plus one or Europe plus one and India is now coming across as a manufacturing power. What big plans does the steel ministry have to ensure that large steel capacities are created in India and a lot of manufacturing from China shifts to India so that India may regain at the cost of what is happening in the world?
If you look at our targets going forward in the near future, according to our national steel policy which was enshrined in 2017, India has grown with the capacity increasing 50% from 100 million tonnes in 2013% to 150 million tonnes per annum. On the other hand, in terms of actual production, those numbers have also grown from 80 million tonnes per annum in 2013-14 to about 121 million tonnes as on date.

This, of course, will lead to tremendous manufacturing capabilities in India. The very fact that under his leadership of the prime minister, a world class facility has been created in Vadodara where Airbus will manufacture the C295 aircraft in India for the first time in its history and where out of 56 orders, 40 will be manufactured in India where almost 13,000 parts and assemblies will be created in India and almost 4,000 to 6,000 engineering jobs will be created and the spin offs of that from a technology perspective will be huge across multiple sectors where you will see tremendous levers being put in place because of the ecosystem that will be set up now.

The government has very ambitious capex programme of almost 10 lakh crores per annum to be put in infrastructure and that is across all sectors from roads to highways to ports to buildings across airports, across every sector pretty much which is resulting in this increase in steel demand of double digits which is happening nowhere in the world except in India and that truly and purely is because of the prime minister’s push on infrastructure, the prime minister’s push on capex and the very fact that each ministry is being monitored in terms of the capex’s targets not for every quarter alone but even every month so there is a huge push on the manufacturing side in India being pinoreed by the prime minister himself.

Large part of the capex in heavy lifting in the steel sector has been done by the private sector. What role do you think the government companies and especially steel authority will play in this vision of yours?
Well I do not think it is one at the cost of the other. I think it is very important to understand that for any successful economy across the world to emerge as a global superpower on the economic front, there has been a a mix of the private sector and the public sector and so is the case in India. It should be very heartening for all of us that the private sector is taking on a pioneering role and I think that is a good thing.