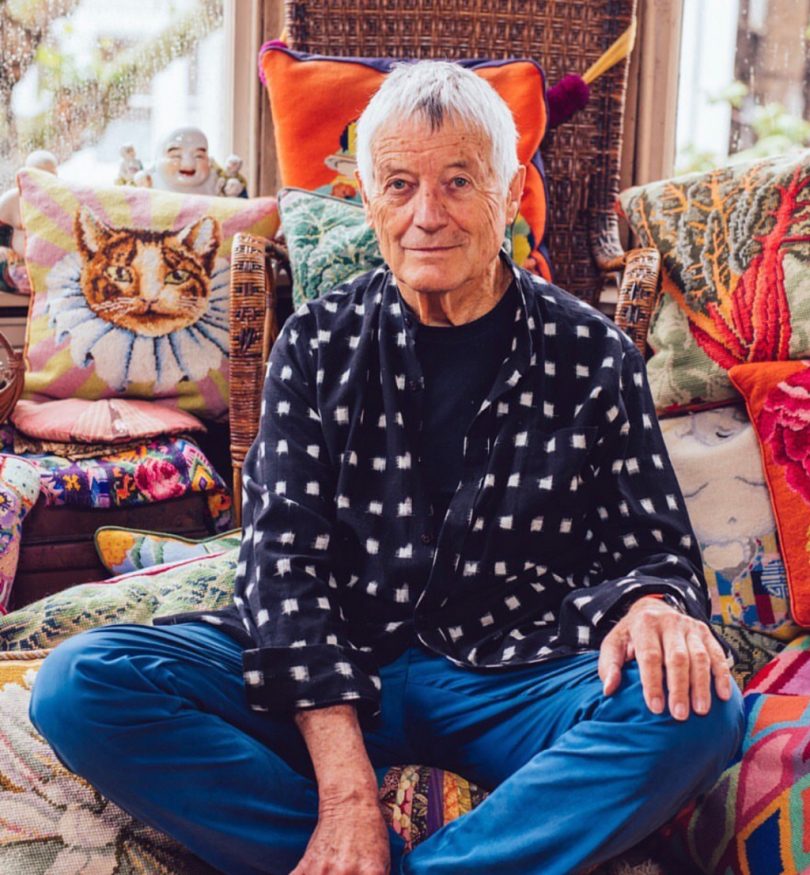 London is preparing for a fireworks display of fabrics later this month when an exhibition of designs by the textile artist Kaffe Fassett and his collective go on display at the Fashion and Textile Museum in Bermondsey.

“Kaffe Fassett: The Power of Pattern,” opens Sept. 23, and will showcase more than 70 textile designs – mainly quilts – and spotlight centuries-old crafts such as knitting, needlepoint and patchwork.

The show aims to “explore Kaffe’s artistic eye” through an immersive visual experience, according to the curator Dennis Nothdruft, the museum’s head of exhibitions, who worked with Newham College London on the show.

Color, pattern and texture pulsate at the center of this wide-ranging display from the California-born Fassett, 84, a flower child if there ever was one. He started his career as a painter and later moved on to knitwear design, working with names such as Bill Gibb, Missoni and Designers Guild.

Since then, Fassett has focused on 3D textile design, and is best known today for his bright quilts, and for inspiring people worldwide to pick up their craft needles and fabric squares, and get to work.

“He is a rock star of the textile world, an artist who makes people see the world in different ways. And he inspires people to make things,” says Nothdruft.

Fassett spent his childhood in Big Sur, California, drawing inspiration in his early years from the state’s dramatic beaches, mountains and nature. He’s lived and worked in London since the early ’60s, and the house and the studio where he and his collaborators work is known as the Colour Lab.

Nothdruft says the show is not a retrospective of the artist’s career, but a full immersion into his world. It has been designed so that visitors can “fall through the looking glass” of Fassett’s designs, and those of the other makers in his collective and his followers worldwide.

“The response people have to his work is almost visceral – it fires them up to do their own,” says Nothdruft, who penned the book that accompanies the show, “Kaffe Fassett: The Artist’s Eye” (Yale University Press).

The timing of the show is right, Nothdruft adds, as Fassett remains “one of the most prolific and influential textile artists alive today. Throughout his long-standing career, Kaffe has encouraged people all over the world to make, and experience, color and pattern in exciting and new ways,” he says.

Zandra Rhodes, who founded the Fashion and Textile Museum in 2003, says that Fassett has a cult-like following and there are always people “queuing around the block,” when one of his shows rolls into town.

“Kaffe’s work is a living art, and he’s helping keep handcraft alive,” says Rhodes, who first met Fassett through Gibb in the late ’60s. She said that his life and work have taken on a new power since COVID-19, when many people turned to handcraft during lockdown.

For the last 30 years, Fassett has worked with a group of textile designers including his husband and manager Brandon Mably, and Philip Jacobs, to develop collections of printed quilting fabrics under the umbrella of the Kaffe Fassett Collective.

Fassett has said he believes pattern is “the best vehicle to express the magical qualities of color, and the exhibition reveals the power of the printed textile.”

The exhibition will open in the foyer of the museum with “vibrant color and texture” greeting visitors as they walk through the door, according to Nothdruft. One room will become “a tented oasis” of Fassett fabrics showing a video of the artist discussing textile design with his collaborators, Mably and Jacobs.

The ground floor gallery focuses predominantly on quilts by Fassett and other artists, while the main gallery will have a giant quilt painted on the floor, which Rhodes described as “a blast of color and pattern.”

Upstairs, the floor will be covered in a patchwork design, and the room filled with creations by Fassett’s collaborators who work specifically with appliqué quilting.

There will also be clothes lines adorned with garments constructed from Kaffe Fassett fabrics and a wall of needlepoint cushions by Mably and Fassett.

Quilters have sent in work from Australia, New Zealand, the U.S., Canada, Africa and Taiwan to create a dynamic display. One whole room is plastered with images of the hand-painted designs of the Kaffe Fassett Collective.