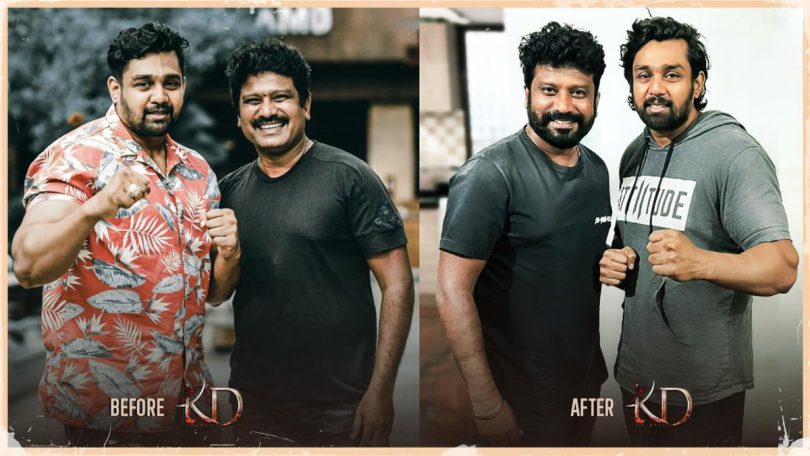 Kannada star Dhruva Sarja, who rose to fame post his stint in popular films including Pogaru, stunned his fans on Thursday after pictures of his weight loss transformation surfaced on social media.

The actor, who is currently working on his first pan-India film KD The Devil, underwent a massive weight loss and shed almost 18 kgs within a span of just 23 days. The film’s director Prem took to his social media account on Thursday to share the pictures of Dhruva Sarja.

In the before and after pictures, Dhruva Sarja’s weight loss can be clearly seen. The caption of director Prem’s post read, “ @dhruva_sarjaa is all set to enter the #KD battlefield after losing 18 kgs in just 23 days!❤️The war is all set to unleash the hero. #KDTheDevil @KvnProductions @ArjunJanyaMusic @SUPRITH_87 #DhruvaSarja #KVNProductions.”

Several social media users took to the comments section of director Prem’s post and reacted to Dhruva Sarja’s post. One comment read, “If it comes to dedication, it is only after this person 🔥 dedication star ⭐ OF SANDALWOOD ONE AND ONLY DS BOSS #kD.” Another post read, “Dedication Ge Brand Ambassador Namma #DHRUVA ANNA. jai Action Prince DS BOSS.”

A set of social media users were also seen concerned about Dhruva Sarja’s health. One user wrote, “It will affect on health Please don’t do like that meanwhile it will cause serious health problems. Weight gain and losing in short period.” Another comment read, “It’s very risky.., huge transformation in short time will affect Health @dhruva_sarjaa please take care of your health…!”

Dhruva Sarja’s ‘KD The Devil’ is touted to be an action drama and will be released in Kannada, Hindi, Tamil, Telugu, and Malayalam. The film will be directed by ‘The Villain’ fame filmmaker Prem and is being bankrolled by KVN Productions.

KD The Devil is slated to release in cinemas this year.