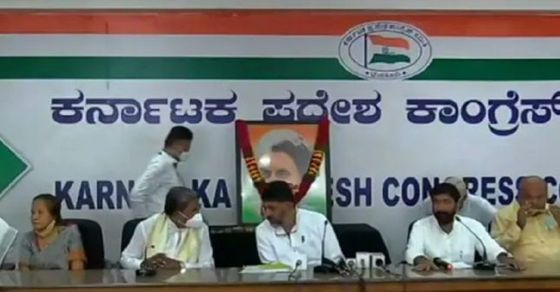 Bengaluru: A controversy has erupted after Karnataka Congress chief DK Shivakumar was apparently persuaded to install the photograph of former deputy Prime Minister Sardar Vallabhbhai Patel at a party event.

The incident took place during an event organised at the Bengaluru party office to mark the death anniversary of former Prime Minister Indira Gandhi on October 31, also the birth anniversary of Sardar Patel.

A conversation between former Karnataka Chief Minister Siddaramaiah and Shivakumar caught on camera has now gone viral on social media.

In a video of the exchange that has emerged online, Siddaramaiah can be heard asking about the absence of a portrait of Sardar Vallabhai Patel, who was born on the same day Indira Gandhi was assassinated, albeit over a century earlier.

Replying to Siddaramaiah, Shivakumar is heard saying that “we never keep Patel’s picture on the day”. However, he is later seen instructing an employee at the Congress office to bring the photograph of Sardar Patel.

The video was released by BJP MLA and former minister MP Renukacharya on October 31.

BJP National General Secretary CT Ravi has attacked the Congress over the incident saying that, “It is a shame that slaves are so much scared of an Italian” – a snide reference to opposition party chief Sonia Gandhi.

“If anyone had doubt how much the Nehru Dynasty hated Sardar Patel, this video clears it. CONgress leaders Siddaramaiah and DK Shivakumar agree to place photo of Sardar Patel along with that of Indira Gandhi fearing BJP (sic),” he tweeted along with the video.