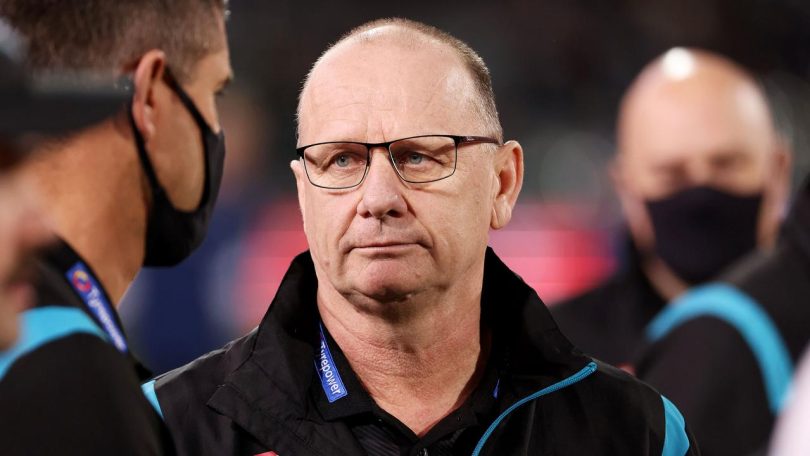 Ken Hinkley is renowned for his honesty.

Now, with Hinkley’s contract nearing the end of his tenure, will Port Adelaide deal in honesty as well as its senior coach has over the journey?

If it is time to part ways – and every week suggestions keep bubbling away that it could be – how do Port Adelaide and Hinkley come to terms on a respectful way to end a partnership that has lasted nearly a decade?

Hinkley has to this point dismissed any links with the vacant Greater Western Sydney senior coaching job, let alone North Melbourne’s, and as he said after last Saturday’s loss to Collingwood, “I’ve had a habit of being true to my word”.

Speak to those in and around Port Adelaide, however, and the narrative appears to have shifted.

Where once Hinkley was a guarantee to be coaching the club in 2023, chances to categorically declare that (and there have been plenty) have been passed up in recent weeks.

Hinkley has bristled at questions surrounding his future and understandably was upset at club supporters who stuck a ‘Sack Hinkley’ sign on club property.

Regarding Hinkley’s future, the general belief is that any conversation would have to be initiated or at least welcomed by him – There is simply too much respect between Hinkley and the club for it to get ugly.

The Giants and Leon Cameron proved this year there’s merit in avoiding ‘the long goodbye’ and coming to a somewhat mutual agreement to end things before the fallout becomes too arduous.

Last year, the same situation was faced by Collingwood and Nathan Buckley, with a decades-long partnership ending as cleanly as it possibly could’ve given the length of the relationship.

“Leon went to a finals series, won a final, he goes into the last year of a contract where they start poorly and it‘s over. You do have to weigh that up.

“I hope if they‘re going to do it they do it early enough because he’s a godsend for North Melbourne or the Giants. Don’t do it so late that everything else is done.”

As things stand, it will all be done in the postscript of 2022 – any possibility of a home Showdown send-off being announced ahead of time are remote, mostly because Hinkley and the club itself seem undecided on what the best move is heading into next year.

From all reports, Hinkley still has the players, while injuries and close losses have made the ladder situation perhaps an unfair reflection on where the side is at.

Still, the reality is Port Adelaide lost its first five matches, recovered, and now has lost four of its last five games.

There have been considerable declines in several key statistics, including points for (from sixth in 2021 to 15th), points from turnovers (sixth to 13th), inside 50 differentials (fifth to 10th) and contested possession differentials (fourth to 10th).

Winnable games against Essendon and Adelaide will close out the season and all focus is on the final fortnight, but it‘s hard to imagine the results won’t have at least some influence on how the club sees itself heading into next year.

Also as big a question for Port Adelaide would have to be: If Ken goes out, who comes in?

Perhaps the easy first option would be Alastair Clarkson, but the Power are a few meetings behind North Melbourne and Greater Western Sydney in that race already.

The Power could easily appeal to Clarkson’s sense of coming full circle given the four-time premiership coach spent a couple of years there as an assistant coach, including their run to the 2004 premiership under Mark Williams.

Clarkson understands what it means to represent Port Adelaide, much like Hinkley has learned in his time at the club.

Then there’s the likes of Adam Kingsley, Ashley Hansen and Adem Yze, who lead a pack of assistant coaches just waiting for their opportunity to lead an AFL side, with Craig McRae a prime example of how well such a move could work.

Speaking on Monday, club president David Koch insisted post-season deliberations will not centre squarely on Hinkley, but did nothing to suggest the winds of change won‘t be sweeping through the club this off-season.

“It’s not just about one individual person. It’s the whole program. Turn it around or watch out,” he told FIVEaa.

“Because every single person’s role will be assessed at the end of the year, as we do each year. But this year is more important than ever and we are not afraid to make change. We have made plenty of changes.

“We have got to win games and we know that is what we exist to do.

“We will be making those hard decisions at the end of the year across the entire program to make us better next year.”

Whatever happens next deserves to happen on Hinkley‘s terms, such has been his incredible contribution to the club for such a long period of time.

And if anyone is truer to their word about their belief they‘re the best person to take Port Adelaide forward or to hand over the reigns, it’s Hinkley.