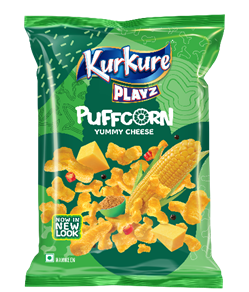 Bringing in a playful twist to the new year, Kurkure, one of India’s most loved snack brands, has expanded its brand with the launch of a youthful new sub-brand, Kurkure Playz. It comes with the widely popular and successful Kurkure Playz Puffcorn and all-new Kurkure Playz Pastax, based on the growing affinity of consumers towards light textured snacks.

The modern sub-brand caters to the rise in demand for soft textured snacks, one of the fastest growing variants in the overall salty snacks category. Kurkure Playz is backed by the success of Kurkure Puffcorn, which enjoyed a rapid growth rate momentum over the last few years. Kurkure Playz Puffcorn has a distinct shape with a light texture and comes in cheese flavour whilst the all-new Kurkure Playz Pastax has a creamy, herb and onion flavour in a pasta-shaped bite.

Expressing her thoughts on the launch, Neha Prasad, Associate Director and Brand Lead, Kurkure said, “The launch of Kurkure Playz allows our iconic brand to tap into the rapidly growing soft texture snacks and expand its product format. The winning product propositions with irresistible flavours of Kurkure Playz Puffcorn and Kurkure Playz Pastax will help us create differentiation and build taste superiority in the category. In true Kurkure style, its light texture will encourage the consumer to take a lighter approach to life, no matter what the situation is.”

Kurkure Playz Puffcorn is available at INR 5, INR 10, INR 20, INR 50 and Kurkure Playz Pastax at INR 5, INR 10, and INR 20 at leading retail and e-commerce platforms across the country. For this launch, Kurkure will highlight the distinct, light texture of the product with its upcoming TVC and robust 360-degree digital surround campaign panning across multiple platforms

Kurkure – a product that was developed in India, has established a strong connection with consumers across the country as a great-tasting snack. Kurkure is one of the eight brands in PepsiCo India’s portfolio, each of which brings in over INR 1000 crore in annual estimated retail sales. The expansion of the Kurkure trademark across different salty snacking formats is a reiteration of PepsiCo’s endeavor of building out strong master brands in its India portfolio. Kurkure is also manufactured and sold in countries like the UAE, Canada, Pakistan, and Bangladesh.

PepsiCo entered India in 1989 and has grown to become one of the largest MNC food and beverage businesses in India. PepsiCo India has been consistently investing in the country and has built an expansive beverage and snack food business supported by 63 plants across foods and beverages. PepsiCo India’s diverse portfolio includes iconic brands like Pepsi, Lay’s, Kurkure, Doritos, Mountain Dew, Tropicana 100%, Gatorade, and Quaker. In less than two decades, the company has been able to organically grow eight brands, each of which generates Rs. 1000 crores or more in estimated annual retail sales and are household names, trusted across the country.

PepsiCo’s growth in India has been guided by our vision to Be the Global Leader in Convenient Foods and Beverages by Winning with pep+.

“Winning with pep+” reflects our ambition to win sustainably in the marketplace and embed purpose into all aspects of the business. For more information, visit www.pepsico.com.