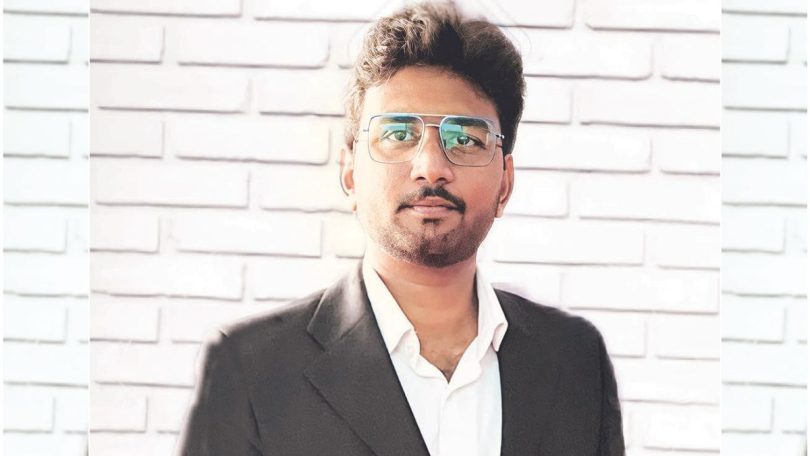 A chat between Salem-based Sona College of Technology student S Nishanth and his senior Pranesh over coffee, in January 2020, has spurred a breakthrough in textile designing. Punch cards, the key element in a Jacquard loom, which are made manually and determine the intricate designs on fabrics such as brocade or silk, have been given a digital makeover by this young student of mechatronics.

Over a period of two years and after much trial and error, Nishanth conceptualised and perfected the Novatex Electric Cylinder, which digitises the working of Jacquard looms. It eliminates the necessity of reconfiguring thousands of punch cards, required for each new design. Nishanth completed the project, an attachment for the Jacquard looms, as a final year student last year.

Weavers can now not only switch over to a new pattern instantly, but also create complex designs on fabrics inexpensively, says Nishanth. Significantly, the punch-card-fed loom inspired the earliest computers designed by Charles Babbage.

The old way: The 7-inch by 3-inch punch cards, actually boards, help create stunning designs, especially on saris and dhotis, in the power and handloom sector. But the process is prohibitively expensive and unwieldy. A single new design requires as many as 2,000 punch cards, each costing 4 apiece totalling 8,000. The cost escalates if more elaborate patterns are chosen. This explains why designs on Kanchipuram, Banarasi and Ikat saris have remained stagnant over the decades. A punch card is a piece of stiff paper that holds digital data represented by the presence or absence of holes in predefined position, which determines specific patterns. Punch card makers, after receiving the pattern from the designers, take a week to convert them into matching holes, a laborious and time-consuming process, before dispatching them to the weavers. The rather long wait, besides the expensive cards, predispose craftsmen to stick to similar designs year after year.

Faster, cheaper: Digitisation, on the other hand, simplifies the three-stage process enormously, explains Nishanth. First of all, the designer creates a pattern on graph paper using specific software, copied to a pen drive. The drive is now attached to Nishanth’s innovation, the Novatex Cylinder, set to be unveiled by September 2023.

The machine, priced at `60,000, will be sold in Tamil Nadu and later in other states. Nishanth’s company, incorporated as Novatex Technology, is being incubated by Ashok Jhunjhunwala-led IIT Madras Incubation Cell as part of its collaboration with Sona College’s Business Incubation Cell in Salem.

“This innovation will find application in the textile industry and will benefit the fashion designers as well as the small weavers in producing more designs at lower cost,” said Chocko Valliappa, vice chairman, Sona Group of Institutions.

“Converting an idea into reality can be a very taxing and challenging task,” avers Nishanth. Since no family help was forthcoming, he counted on small businesses and prize money from competitions to finance his project. “I faced multiple challenges and failures over the past two years, optimising the final product. It involved hundreds of major and minor alterations, each boring a big hole in our pockets,” recalled Nishanth. “The latest version is probably the most efficient we have devised, being five times smaller, 10 times faster and costs only half to manufacture, as compared to the original prototype.”