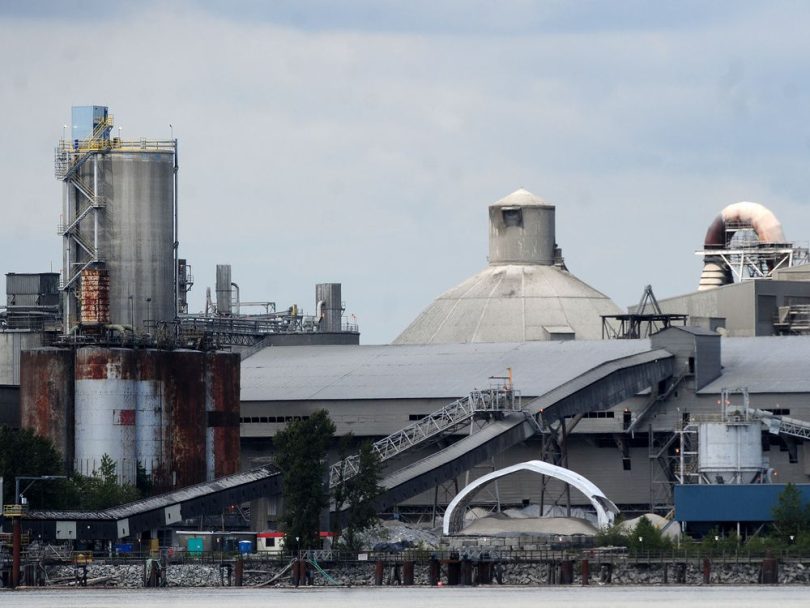 Lafarge’s Richmond cement plant has been operating at limited capacity since a May 31 fire in part of the pre-heater tower.

Cement is a key ingredient in making concrete, a substance used in almost every construction project.

The Lafarge woes, coupled with a strike by some truck drivers, is severely choking the supply of concrete in the Lower Mainland.

“It’s almost like the perfect storm,” said Racy Sidhu, chairman of Concrete B.C. and owner of Yard At A Time Concrete in Delta. “The demand is far outreaching the supply.”

“Concrete is critical to everything we do,” Sidhu said, noting it’s the foundation of most infrastructure — sidewalks, schools, bridges, homes and condo buildings.

Lafarge’s Richmond plant is a major supplier of cement in B.C., Alberta and the Northwestern U.S., producing about a million tons of cement a year. according to Sidhu.

The Richmond cement plant “is undergoing electric repairs to an isolated area,” Lafarge spokesperson Christa Broadfoot said by email. “We expect to resume full production capacity shortly and are leveraging our strong production and supply network in an effort to minimize impact to our customers.”

Broadfoot did not say when the plant will be back to full capacity and did not indicate the extent to which supply has been constrained.

The May 31 fire at the Richmond plant resulted in an inspection by WorkSafeBC. Lafarge was responsible for conducting an incident investigation into the cause of the fire and provide a final report to WorkSafeBC within 30 days of the incident, WorkSafeBC spokesperson Alexandra Skinner said.

“WorkSafeBC did not issue a stop-work order, so any stoppage of production was a decision by Lafarge,” Skinner said.

Concrete companies have been told the Lafarge plant has limited inventory because it is not currently producing clinker, a solid material used to bind the cement, Sidhu said. The plant is grinding stockpiled clinker, he said.

Broadfoot did not respond to follow up questions to confirm these details.

About 160 Rempel Bros. Concrete employees have been on strike since May 20 and an additional 110 Ocean Concrete and 24 Allied Concrete employees are also not crossing picket lines. The union, Teamsters Local 213, was at the negotiating table Tuesday with Lehigh Hanson, Inc., the Texas-based company that owns Rempel and the two sides are set to meet again Wednesday.

Sidhu said his company was recently approached by contractors on the Broadway SkyTrain extension project asking if he can supply concrete. He had to turn them down.

Construction on the Millennium Line’s 5.7-kilometre Broadway Extension began in May 2021 and is expected to be completed by 2025.

The Ministry of Transportation and Infrastructure said in a statement Tuesday that the shortage has not caused any work stoppages on any Transportation Investment Corporation projects including the Broadway Subway Project and the Pattullo Bridge replacement.

“The project teams are working to mitigate any potential future impacts,” a ministry spokeperson said. “At this time, it does not appear there are any delays to other capital projects, including any of the major flood repair projects.”

Sidhu said he’s heard from companies in Northern Alberta that have stopped making concrete because there’s no cement supply.

The concrete shortage will have a domino effect on every other building trade, said Jake Jinjoe, co-owner of Vancouver-based Raven Concrete.

“The first thing you do when you build something you pour foundation, right?” Jinjoe said. If there’s no concrete to pour the foundation of a home or highrise, the carpenters, electricians, plumbers and painters can’t start their work, he said.

The concrete shortage has forced him to halt a townhome project in North Vancouver.

Vancouver Concrete Contractors office manager Tyler Mertens said the company has had to halt most of their major projects.

“It’s not just our business,” Mertens said. “Every other concrete business is probably going through something similar.”

The pent-up demand means that even when the strike comes to an end and Lafarge resumes full production, the cement and concrete shortage will likely extend right through the summer, Sidhu said.

That’s why he wants to see the provincial government identify cement as a strategic resource which would require cement producers to supply Canadian companies first before exporting to the U.S. About 40 to 50 per cent of the cement produced in B.C. — which has a handful of cement-making plants — is shipped to U.S. markets, he said.

Sign up to receive daily headline news from the Vancouver Sun, a division of Postmedia Network Inc.

The next issue of Vancouver Sun Headline News will soon be in your inbox.