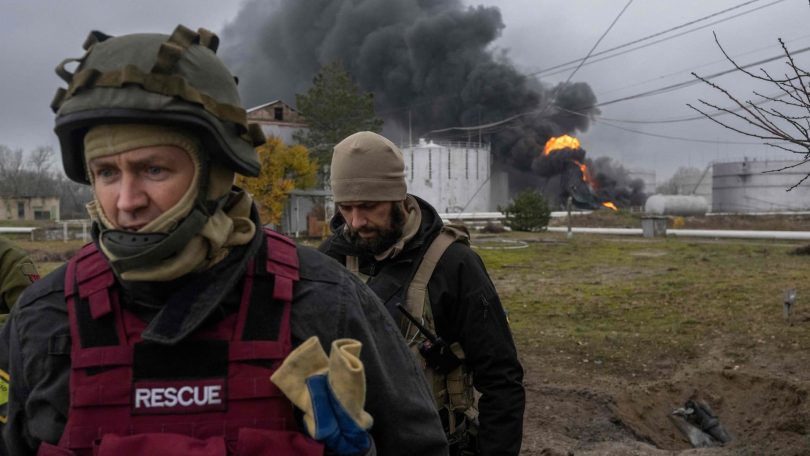 “If we allow Putin to win, all of us will have to pay a much higher price,” Stoltenberg told the 68th Annual Session of the NATO Parliamentary Assembly. “Authoritarian regimes around the world will learn that they can get what they want with brute force. This would have direct consequences for our security. It would make the world more dangerous. And us more vulnerable.”

Stoltenberg recognized the cost-of-living crisis around the world and the concerns about the cost of support for NATO Allies, as many countries have begun to experience what has become known as “Ukraine fatigue.” However, Stoltenberg contrasted the monetary price paid by Allies to the massive loss of life in Ukraine: “the Ukrainians, they pay a price which is measured in blood.”

NATO significantly stepped up its support to Ukraine earlier this year, following the Alliance’s June summit in Madrid. It is because of this continued military and financial support, along with Ukrainian bravery, according to Stoltenberg, that Russia faces “setback after setback” including the withdrawal from Kherson.

“But it would be a great mistake to underestimate Russia,” he warned. “It retains significant military capabilities and a high number of troops. Russia is willing to suffer substantial casualties. And is willing to inflict horrific suffering on Ukrainian people.”

“So we must be prepared to support Ukraine for the long haul,” he said.

The Zaporizhzhia nuclear power plant, in the Russian-controlled area of Enerhodar, seen from Nikopol in April 27, 2022.

The head of Russia’s state-run atomic energy agency, Rosatom, warned that there’s a risk of a nuclear accident at the Zaporizhzhia nuclear power plant a day after several attacks on the Russian-occupied site, which Rosatom CEO Alexey Likhachev blamed on Ukraine.

“We are informing the world community that the plant is at risk of a nuclear accident, and it is obvious that Kyiv considers a small nuclear incident acceptable,” Russian state news agency Tass quoted Likhachev as telling reporters.

“Large or small radioactivity, this will be a precedent that will forever change [the] course of history. Therefore, everything must be done so that no one has in their minds to encroach on the safety of the nuclear power plant,” he said.

Russia and Ukraine have repeatedly accused each other of shelling Europe’s largest nuclear power plant and risking a massive nuclear accident.

It’s unknown who was behind the attacks at the weekend that damaged buildings, systems and equipment, with some of the explosions occurring near the reactors but not directly striking them.

The IAEA has called for the creation of a security zone around the plant, something Likhachev said would only be possible if it was approved by the U.S.

Kremlin spokesman Dmitry Peskov waits to watch the Victory Day military parade at Red Square in central Moscow on May 9, 2022.

The Kremlin said that it will “bring to justice” those responsible for the alleged execution of Russian solders as a dispute over the alleged killings continues between Moscow and Kyiv.

Speaking to reporters Monday, Kremlin spokesman Dmitry Peskov said “Russia will do everything possible within the framework of international mechanisms in order to draw attention to this crime and call to order and to the law those who may be involved in it.”

Ukraine has said it would investigate video footage circulated on Russian social media which Moscow claims shows Ukrainian forces killing Russian troops who may have been trying to surrender.

However, Stefanishyna, speaking late Saturday, said “it is very unlikely” that the short, edited snippets show what Moscow claims to be a “brutal murder.”

Conversely, Ukraine says Russia has been responsible for multiple alleged war crimes on Ukrainian soil since the start of the invasion, including the deliberate targeting of civilian infrastructure, including hospitals and schools, and residential buildings. Allegations of torture chambers set up to interrogate Ukrainian civilians and captured troops is also being investigated. Moscow denies targeting civilians during the war.

An advance delegation of Spanish police officials has already arrived in Kyiv to meet with representatives of the Ukrainian public prosecutor’s office, the Spanish Interior Ministry said.

In their initial meeting, the two countries established the terms of cooperation and specified the areas of deployment, the ministry said.

Spanish officers are set to work alongside Ukrainian investigators and prosecutors in the collection of evidence that could be incorporated into cases probing alleged violations of international law following Russia’s invasion of Ukraine in February.

Sanchez also announced that a new training center for Ukrainian troops in the central Spanish city of Toledo will start operating at the end of November.

Ukraine says it will investigate video footage circulated on Russian social media which Moscow alleged shows that Ukrainian forces killed Russian troops who may have been trying to surrender, after one of the men seemingly refused to lay down his weapon and opened fire, AP reported.

“Of course Ukrainian authorities will investigate this video,” Olha Stefanishyna, Ukraine’s deputy prime minister overseeing the country’s push to join the European Union, said on the sidelines of a security forum in Halifax, Nova Scotia.

Russian authorities announced the opening Friday of a criminal investigation based on the snippets posted on Russian Telegram channels and relayed on other social media. They present a muddled and incomplete picture.

‘We may not be so lucky’ next time, IAEA chief says after nuclear plant attacked again

The Zaporizhzhia nuclear power plant, which came under heavy shelling over the weekend, had a lucky escape, according to the head of the U.N.’s nuclear energy agency.

“Once again, we were fortunate that a potentially serious nuclear incident did not happen. Next time, we may not be so lucky. We must do everything in our power to make sure there is no next time,” the International Atomic Energy Agency’s director general Rafael Mariano Grossi said in a statement Sunday.

The IAEA said repeated shelling at the Zaporizhzhya plant on Saturday evening and Sunday morning damaged buildings, systems and equipment, with some of the explosions occurring near the reactors and damaging parts of the plant, including a radioactive waste and storage building and cooling pond sprinkler systems.

A Russian serviceman guards an area of the Zaporizhzhia Nuclear Power Station in territory under Russian military control, in southeastern Ukraine, on May 1, 2022.

Grossi reiterated his call for urgent measures to protect the plant and prevent a nuclear accident during the current conflict in Ukraine. He added that agreeing and implementing a nuclear safety and security protection zone around the nuclear power plant must happen now.

“Even though there was no direct impact on key nuclear safety and security systems at the plant, the shelling came dangerously close to them. We are talking metres, not kilometres. Whoever is shelling at the Zaporizhzhya Nuclear Power Plant, is taking huge risks and gambling with many people’s lives,” Grossi said.

Ukraine and Russia accuse each other of shelling the nuclear power plant, Europe’s largest of its kind, which has been occupied by Russian troops since near the start of the war. The IAEA team of experts plan to assess the shelling impact on the site on Monday.

“As we go forward into the winter, we’ve done a lot to try to prepare the Ukrainians to be prepared for a fight in the winter, and enable them to continue to keep pressure on our adversaries throughout the winter months,” he told a press conference as he prepared to meet his Indonesian counterpart, Defense Minister Prabowo Subianto, Monday.

“I think they’ll be in much better condition than their adversaries, because of the things that we provide. And again, our focus is to support them throughout. Their focus is to make sure that they’re doing everything to take back every edge of their sovereign territory,” he said.

He added that it’s “hard to predict how things will evolve” or what kind of timeline there might be for the war ending, however.

Austin said Ukraine had put the military assistance from its allies to good use in the war, noting “we’ve seen Ukraine use that assistance in very artful ways and they they’ve been very successful on the battlefield … they’ve taken back Kharkiv, and they’ve also most recently taken back as the important town of Kherson. And so we’ve seen a number of successes on the battlefield.”

Ukraine’s eastern Donetsk region has been the focus of intense fighting for weeks, if not months, but Britain’s Ministry of Defense said it believes a key area of vulnerability for Russian forces is Svatove, an administrative hub in the neighboring Luhansk region.

“With Russia’s south-western front line now more readily defendable along the east bank of the Dnipro River, the Svatove sector is likely now a more vulnerable operational flank of the Russian force,” the ministry said on Twitter Monday.

An aerial view of Svatove city, in the Luhansk region of eastern Ukraine. The British Ministry of Defense said Ukrainian formations can now approach the city to strike Russian supplies.

“As a significant population centre within Luhansk Oblast [province], Russian leaders will highly likely see retaining control of Svatove as a political priority.”

“However, commanders are likely struggling with the military realities of maintaining a credible defence, while also attempting to resource offensive operations further south in Donetsk,” it added. “As on other parts of the front, Russian forces continue to prioritise constructing defensive positions, almost certainly partially manned by poorly trained mobilised reservists.”

The ministry noted that both Russia’s defensive and offensive capability continues to be hampered by these severe shortages of skilled personnel and munitions.

The ministry said that in the last week, “intense artillery exchanges” have continued in the area of Svatove in Luhansk.

Ukraine’s President Volodymyr Zelenskyy said fierce battles are still ongoing, with the most intense being in the Donetsk region, but that ground attacks have declined as winter sets in.

“The fiercest battles, as before, are in the Donetsk region. Although there are fewer attacks today due to the deterioration of the weather, the number of Russian shelling occasions remains, unfortunately, extremely high,” Zelenskyy said in his nightly address Sunday.

In Luhansk, the region next to Donetsk, Zelenskyy said Ukrainian forces are advancing “little by little,” but added there have been almost 400 instances of shelling in the eastern region on Sunday alone. The president said forces in the southern part of Ukraine are “holding the line,” although the situation around de-occupied Kherson remains tense, with Russians shelling the city last night.

Black smoke rises from an oil reserve in Kherson on Nov. 20, 2022, amid the Russian invasion of Ukraine.

Ukraine’s damaged energy networks remain a massive problem for the government, with Zelenskyy noting that the “restoration of networks and technical supply capabilities, demining of power transmission lines, repairs – everything goes on round the clock.”

He said energy workers had managed to alleviate the situation in some regions “where there were a lot of real problems yesterday.” Nonetheless, “stabilization shutdowns” (scheduled energy shutdowns) have taken place in 15 regions and in Kyiv.