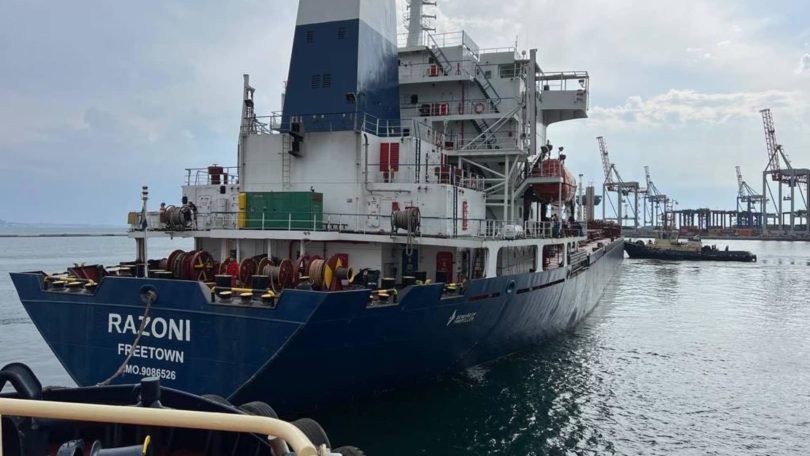 Russia is likely reallocating a significant number of its forces from the northern Donbas sector to southern Ukraine, Britain’s Ministry of Defense said Monday, echoing comments by the Ukrainian authorities last week.

“Russia is probably adjusting the operational design of its Donbas offensive after failing to make a decisive operational breakthrough under the plan it had been following since April,” the ministry said on Twitter.

“It has likely identified its Zaporizhzhia front as a vulnerable area in need of reinforcement.”

The ministry noted that, over the last four days, Russia has continued to attempt tactical assaults on the Bakhmut axis, northeast of Donetsk, but had only managed to make slow progress.

Several southern cities have experienced Russian shelling over the weekend, including Mykolaiv and Odesa.

Houses in the Odesa region destroyed by Russian shelling.

On Sunday evening, Ukraine’s President Zelenskyy commented that “now the Russian army is trying to strengthen its positions in the occupied areas of the south of our country, increasing activity in the relevant areas. Part of the Russian forces are transferred from their positions in the east to the south – to the Kherson region and the Zaporizhzhya region… But this will not help them there,” he said, saying Ukraine’s armed forces “are ready to respond to any new activity of the occupiers.”

Sierra Leone-flagged dry cargo ship Razoni departs from port of Odesa in Odessa, Ukraine on August 01, 2022 as part of a recent grain export deal signed between Turkey, the UN, Russia, and Ukraine and expected to reach Istanbul tomorrow.

The Joint Coordination Centre, a body set up by Russia, Ukraine, Turkey and the United Nations to coordinate and oversee the shipments of vital produce from Ukraine, has said it is monitoring the safe passage of the merchant ship.

A statement from the JCC on the so-called “Black Sea Grain Initiative” issued on Monday said it had “authorised the M/V Razoni to sail from the port of Odesa today.”

The JCC has agreed to the specific coordinates and restrictions of a humanitarian maritime corridor and has communicated those details in accordance with international navigation procedures, it said.

It added that it “has requested all its participants to inform their respective military and other relevant authorities of this decision to ensure the safe passage of the vessel.”

The Razoni will carry over 26,000 metric tons of corn, the JCC said, and having left Odesa this morning it is estimated to arrive at the inspection location in Turkish territorial waters tomorrow, Aug. 2.

Following inspection, it will proceed to its final destination in Tripoli, Lebanon.

The JCC was agreed upon in late July and set up by Russia, Ukraine, Turkey and the U.N. in a bid to get vital exports, such as wheat, fertilizer and cooking oils, out of Ukraine after months of a blockade on Ukraine’s ports. Ukraine blamed Russia for the blockade while Moscow blamed Ukraine for mining waters in the Black Sea that it said prevented shipping.

The deal will see ships guided through such waters, through what the JCC terms “the Safe Humanitarian Maritime Corridor.” Ukraine’s infrastructure minister said the shipment would help to prevent world famine.

Russian President Vladimir Putin at the Navy Day Parade on July, 31 2022, in St. Petersburg, Russia. Planned Navy Day celebrations in Sevastopol in Russian-annexed Crimea were canceled on Sunday after officials accused Ukraine of carrying out a drone attack on the Black Sea Fleet’s headquarters there, injuring five people.

“We will provide protection firmly and by all means,” Putin said in a speech Sunday to mark Russia’s “Navy Day,” saying that “the key thing here is the capability of the Russian Navy.”

He said its combat readiness was “constantly improving,” adding that the latest Zircon hypersonic missile systems, “which have no countertypes in the world and no barriers,” would be added to the navy’s arsenal.

“Dear comrades, their delivery to the Russian armed forces will begin in the coming months,” Putin remarked in a speech in St. Petersburg. Zircon missiles, intended for use by the Russian navy against enemy ships and ground targets, can purportedly fly at nine times the speed of sound and have a range of just over 600 miles.

Putin said the area of their deployment would depend on Russian interests. He did not mention Ukraine in his speech.

Planned Navy Day celebrations in Sevastopol in Russian-annexed Crimea were canceled on Sunday after officials accused Ukraine of carrying out a drone attack on the Black Sea Fleet’s headquarters there, injuring five people.

“An unidentified object flew into the courtyard of the fleet’s headquarters,” wrote Mikhail Razvozhayev, governor of Sevastopol — which is where Russia’s Black Sea Fleet is stationed — on the Telegram messaging app.

“According to preliminary information, it is a drone.”

Ukraine has not officially commented on the explosion amid reports that it could have been a homemade device made by Ukrainian insurgents in the city.

The first shipment of grain exports from Ukraine in months has departed from the port of Odesa, Ukraine’s Infrastructure Minister Oleksandr Kubrakov confirmed and data from MarineTraffic.com showed.

The Sierra Leone-flagged ship Razoni, which is loaded with corn, will head to Lebanon, Turkey’s Defense Ministry said, according to a Reuters translation of a statement from the ministry.

“As a result of the intense work the Joint Coordination Center in Istanbul and talks by (Turkish) Defense Minister Hulusi Akar, the ministers and relevant parties: It has been agreed that Sierra- Leone flagged and corn loaded Razoni dry cargo ship will leave Odesa port on 1 August 0830 am for Lebanon.”

A port in the city of Odesa, Ukraine, on July 29 2022. The first shipment of grain exports from Ukraine in months comes after Turkey and the United Nations brokered an agreement between Ukraine and Russia to allow for the resumption of key exports from Ukraine, such as grain and fertilizer.

The shipment comes after Turkey and the United Nations brokered an agreement between Ukraine and Russia to allow for the resumption of key exports from Ukraine, such as grain and fertilizer, of which both countries are key producers.

The deal aims to allow safe passage for grain shipments in and out of the ports of Chornomorsk, Odesa and Pivdennyi. More ships are expected to leave Ukraine in the coming days.

One of Ukraine’s richest men, the agricultural tycoon Oleksiy Vadatursky, and his wife Raisa died during Russian shelling of the southern city of Mykolaiv this weekend.

Video footage released by the local emergency services on Sunday showed firefighters tackling burning buildings after heavy shelling of the city, a key target for Russia’s invading forces trying to make territorial gains in the south of Ukraine, on Saturday night into Sunday morning.

Vadatursky, founder and owner of agriculture company Nibulon, and his wife were killed in their home, Mykolaiv Governor Vitaliy Kim said on Telegram.

People receive clear water for drinking in Mykolaiv, on July 21, 2022, amid the Russian invasion of Ukraine.

Ukrainian President Volodymyr Zelenskyy offered his condolences to the family and friends of the businessman and his wife on Sunday evening, saying “people like them, companies, and our Ukrainian south guaranteed the world’s food security.”

Zelenskyy went on to thank Mykolaiv residents for “their indomitability and for protecting the city and the region,” as well as other southern cities that have faced intense shelling in recent weeks.

“I also thank Nikopol, Kharkiv, Kryvyi Rih and the entire Dnipropetrovsk region, the strong people of Zaporozhzhia and the region, all Ukrainians of the Kherson region, everyone who defends the approaches to Odesa and the region… Thank you for your courage,” he said.

Russia’s bombardment of cities and settlements in the area has become intense over recent weeks as its forces look to advance after capturing neighboring Luhansk, with both regions making up the Donbas in the east.

“The more people leave Donetsk region now, the fewer people the Russian army will have time to kill,” Zelenskyy said in a video address Saturday. “We will use all available opportunities to save as many lives as possible,” he added.