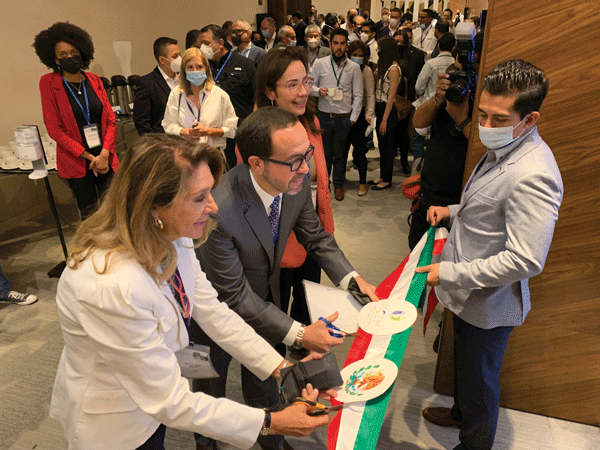 FICEM Congress, “Green Cement & Concrete 2050”, took place in Mexico City on 23-26 May 2022, and brought together 200 industry and government representatives from Latin America and the Caribbean to discuss the technical, regulatory and financial aspects of decarbonising the regional cement sector.

This FICEM Congress – the first in-person event to be organised by the Inter-American Cement Federation (FICEM) since 2019 – made the statement that, in spite of the pandemic, the regional cement sector remains fully committed to carbon neutrality, placing it at the heart of the industrial agenda.
Opening the conference, Maria José García, executive director of FICEM, highlighted the major role of construction and cement in the future prosperity of the region. She explained that unlike developed nations in Europe, for example, Latin America is still in the process of lifting a large part of its population out of poverty which will require the region to reverse its infrastructure deficit, provide decent housing and access to drinking water, as well as build resilience to the high climatic vulnerability of the region. All of this will require more cement and must be achieved at the same time as adopting a challenging carbon reduction agenda, she noted.

Following the success of the European cement sector, technology roadmaps will play a key role in this process for Latin American cement producers as they provide the data, arguments and policy positions for cement manufacturers to engage and improve national policy in line with decarbonisation aims.

Current efforts are focussed on aligning each Latin American country with the GCCA’s 2050 Cement & Concrete Technology Roadmap and place each domestic industry firmly on track to meet net zero carbon emission ambitions by 2050. To date, Brazil has published its full decarbonisation roadmap, and many others are set to follow including Mexico and Peru later in 2022.

According to FICEM, the primary challenge for the Latin American cement sector is that it has to convince government authorities to put supportive regulations in place to enable progress for co-processing, revised standards so that new low-clinker cements can be deployed, and ultimately support the adoption of carbon capture for the industry.

Ricardo Pareja, innovation leader (FICEM), stressed how the urgency to address climate change is increasing. The 2022 IPPC report stated that Latin America and the Carribbean account for 11 per cent of accumulated net anthropogenic CO2 emissions and are uniquely exposed to climate change vulnerabilities.

He argued that no other material can match concrete in meeting the developmental goals and climate change targets. Demand for cement will continue to rise as the global population increases by an estimated 40 per cent between 2020 and 2100. This infers a huge increase in resource consumption, including cement. This growth in consumption and carbon neutrality must go hand-in-hand.

Mr Pareja highlighted key opportunities for the cement sector that needed support from government reform. He cited Europe as an example with high alternative fuel (AF) utilisation rates of on average 48 per cent compared to 18 per cent in Latin America – the difference being the lack of economic incentive to drive waste from landfill to recycling or co-processing in kilns. In Latin America landfill costs are only US$5-10/t versus over US$100/t in Europe.

The potential for co-processing in Latin America is vast and, according to data science expert Carlos Pinilla, 84 per cent of waste is currently routinely collected in Latin America (compared to 100 per cent in North America), of which 26 per cent has sufficient calorific value for co-processing – presenting an enormous opportunity for the industry. As waste collection matures and the population grows, the volume and transportation distances to cement plants will improve and it will be possible to satisfy the co-processing demands for all plants by 2050.

Carlos Medina, director of sustainability at CEMEX Mexico, discussed the long-term potential for hydrogen to displace fossil fuels in the cement industry, citing the successful demonstration project by Hanson (UK), where 15 per cent hydrogen was used in the fuel mix of the main burner, resulting in a 28 per cent reduction in CO2 emissions from combustion. Flame dynamics, safety and transportation, and high costs are some of the challenges that need to be resolved. However, cemex is already using hydrogen routinely to improve combustion while burning AFs: hydrogen is injected at 10m3/h into the main burner, which can increase thermal subsitution rates by up to 12 per cent.

Several presentations highlighted the high potential for supplementary cementitious materials (SCMs) in Latin America and the corresponding carbon reduction potential. At present, the region is performing well with an average clinker factor of 71 per cent, around six per cent lower that the global average.
Jorge Ivan Tobon of the Faculty of Mines and Materials, University of Colombia, pointed out that CO2 savings in cement and binders would need to contribute nine per cent of CO2 reduction in the net zero pathway. Fly ash, slag and other common SCMs will not be available in sufficient quantities, therefore thermally activated clays offer the best alternative due to their high availability. However, he noted the high level of variation in qualities of clays will require technical solutions and adaptation of technical norms – such as those seen in the EN197-5 revisions – to accommodate new types of low-clinker cement compositions.

Vanderley John, Universidad de San Pablo, argued that rising carbon prices will accelerate the adoption of new cement types. He noted that calcined clays are already well established in Brazil. In future, factories will produce highly reactive clinker, making a wider portfolio of SCMs available to produce tailored products based on client needs while maintaining product durability and a low-carbon footprint.
Yury Villagran, representing RILEM, agreed on the high potential to reduce CO2 with SCMs but cautioned that to be successful, the industry needs to maintain the same price for the end product, educate end users to use new products correctly, and maintain quality control to ensure durability and other performance standards are maintained.

In other areas, Rodolfo Hernandez, mining manager at Melón Cementos, Chile, described how the company is transitioning it cement transport fleet to electric vehicles (EVs) after a successful pilot study. Transport emissions in Chile represent 24 per cent of total GHGs, therefore EVs have a key role to play in supporting national decarbonisation efforts, as well as a reduction in other air pollutants from fossil fuels.
Michael McSweeney, former president of the Cement Association of Canada, warned that 2030 is only eight years away, so the industry must instigate real change quickly to meet intermediate CO2 reduction targets. He stressed how important it is for the cement industry to remain engaged with government to ensure new legislation is successful. He cited a cautionary tale from Canada, where the authorities in British Columbia introduced a carbon tax that was meant to reduce CO2 by 30 per cent by 2020. Instead emissions rose by six per cent, and while cement plants in British Columbia have paid CAD1m (US$769,280) each year as part of the carbon tax, all of these funds were returned to citizens while none of it was used to innovate to reduce emissions.

Martin Schneider, speaking in his capacity as director of ECRA, pointed out that to reach the 2050 carbon neutrality targets, a significant (40 per cent) of carbon emissions can only be addressed by carbon capture, utilisation and storage (CCUS). In terms of technology readiness, post-combustion technologies involving tail-end separation, ie amine scrubbing of the flue gas, are the most promising solutions. Oxyfuel technology, where a kiln is operated with 100 per cent oxygen, resulting in pure CO2 emissions, is also highly promising.

CCUS requires major investment: post combustion is generally more expensive (EUR50-100/t CO2) than oxyfuel technology (EUR40-60/t CO2). Oxyfuel requires the kiln to be adapted, but existing kilns can be retrofitted. Transportation and storage, or utilisation of the captured CO2 are major problems to be solved and will involve additional high cost. Ultimately, however, Schneider believes CCSU will be successful: “I’m 100 per cent sure our industry will apply this technology as it works towards net zero.”

Gabriel Jaime Vargas, innovation leader at Cementos Argos (Colombia) described research into the role of CO2 in the production of 100 per cent of renewable fuels through microalgae. There is potential but it will require gigantic investment and therefore collaboration between cement producers, governments and investors.

Green financing will be vital in achieving many of the carbon neutrality goals. According to Christian Gischler Blanco, lead energy specialist at the Inter-American Development Bank, there is an appetite to finance new projects and technologies, from calcined clays/SCMs to alternative fuels and hydrogen, if the cement sector can demonstrate decarbonisation objectives. 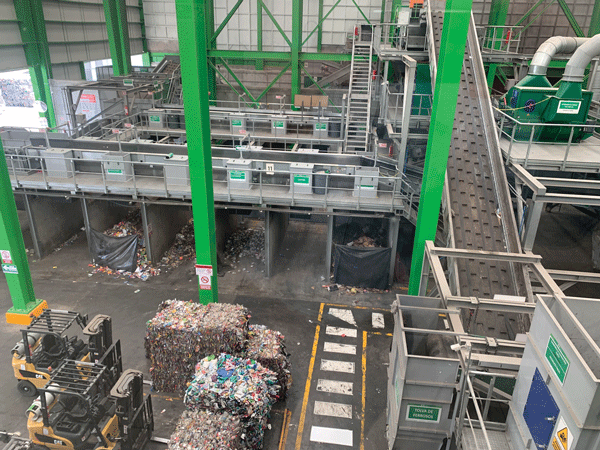 According to José Guillermo Díaz, facility manger, the RDF can replace around 150tpd of petcoke kiln fuel at a rate of approximately 2t of RDF to 1t of petcoke (petcoke: 8000kcal/kg vs RDF: 4100kcal/kg). Combined with RDF from two other waste facilities in Mexico City, Pro Ambiente supplies a total of 1100tpd of RDF to cemex’s kilns at Barrientos, Huichapan and Tepeaca.