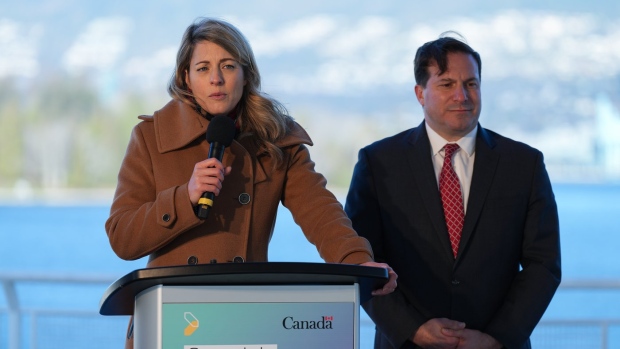 The Liberal government unveiled its long-awaited Indo-Pacific strategy on Sunday, announcing more military spending and closer ties with countries such as India.

The strategy earmarks $2.3 billion for Canada to form closer ties with countries that span Pakistan to Japan, including some funding that the Liberals have announced in recent weeks.

“What you’re seeing today is a reorientation of our foreign policy (that) we haven’t seen in a long time,” Foreign Affairs Minister Mélanie Joly told reporters in Vancouver.

“It sends a clear message to the region that Canada is here, and they can trust that we’re here to stay.”

The new announcements include nearly a half-billion dollars to deploy a third naval frigate to the area and boost collaboration on cybersecurity and military training with like-minded countries.

Canada will also increase its visa-processing capacity to improve a system plagued by delays that has experts fearing that talented youth in the region will move elsewhere.

That includes visa offices in New Delhi and Chandigarh, India as well as Islamabad, Pakistan and Manila, Philippines.

Earlier this month, Prime Minister Justin Trudeau announced $92.5 million to create roughly 60 new diplomatic jobs in the region, but the strategy lists no target, and Joly did not specify whether plans have changed around that figure.

But the strategy does call for an expansion of diplomatic staff in existing embassies, as well as new posts in places such as Hawaii and Fiji.

That’s on top of recently announced plans to expand on trade ties with southeast Asian countries as a counterweight to China’s influence, including by financing infrastructure projects in developing countries.

“To secure this economic future, we need to have strong trading relationships and partners around the world to protect our jobs and businesses here at home,” International Trade Minister Mary Ng said at the press conference.

Ottawa will also send 200 experts to advise countries that want to work with Canada on everything from governance to oceans management and the transition off of fossil fuels.

The funding announced Sunday and in recent weeks spans five years, with no benchmarks for the rollout year over year.

But Defence Minister Anita Anand said the military is hoping to add a third frigate to the region “by next year,” which would depart Halifax for the Indian Ocean.

That’s on top of existing work to uphold United Nations sanctions on North Korea by monitoring for goods being illegally transferred between ships, and sailing around the Taiwan Strait to demonstrate the view of allies that those waters do not belong to China.

Anand said working with countries such as Indonesia, Malaysia, the Philippines, Vietnam and Singapore represents a shift that goes beyond Canada’s naval presence in the region.

“In terms of the allies that we chose to work with here, we want to cast as wide a net as possible to make sure that we are able to co-operate militarily,” Anand told reporters from her Toronto-area riding.

She said these plans include projects to boost the role of women in peace and security in those countries.

On trade, Ng said she is hoping to quickly launch new grants for businesses exporting to new markets in the region, and to soon have a concierge service that works with the private sector to spot opportunities for Canadian business.

“I’m going to be very practical about what businesses need,” she said in an interview from Vancouver.

She said an uptick in trade missions will be done “in a Team Canada way” via trips that bring along provinces, territories and industry groups.

Ng has made dozens of visits to the region in recent weeks and posted regular updates on trade negotiations. She said what’s new in Sunday’s strategy is a comprehensive sense of what Ottawa aims to prioritize.

Industry generally agreed with her.

“This type of detailed regional plan is useful, as it not only clarifies Canada’s interests it also provides much-needed certainty for Canadian businesses with operations and investments overseas,” wrote Goldy Hyder, head of the Business Council of Canada.

Yet he noted the strategy lacked a plan to expedite projects to export more energy along the Pacific coast, as well as a commitment to expand on the planned export of liquefied natural gas to countries that have publicly asked for it.

The council argued Ottawa should next launch a strategy for the Americas, although the Liberals have instead said an Africa strategy is up next.

The Canadian Chamber of Commerce said the Indo-Pacific strategy will help businesses diversify their export markets, but only if Canada gets its own house in order.

“The single largest immediate contribution Canada can make to the Indo-Pacific is to develop a comprehensive strategy to export far greater quantities of food, fuel and fertilizer to the region,” wrote CEO Perrin Beatty, citing preliminary talk of expanding railroads and port capacity.

Beatty also praised the security initiatives and plans to engage the “much-underutilized” diaspora groups in Canada.

The strategy did not include a registry of foreign agents. Some intelligence experts have been calling on Canada to follow the U.S. and Australia in compelling countries to register anyone engaging in domestic political activity.

The strategy was first promised in 2020 and comes after rocky diplomatic relations with China and increasingly loud demands from business leaders and defence experts that Canada map out its plans for the regions.

Sunday’s strategy reiterates some funding Trudeau had already announced on his recent trip to Asia, which included cash for more trade missions, a team in Canada and Asia to form energy partnerships, and Canada’s first agricultural office in the region.

The strategy generated an instant thumbs-up from U.S. ambassador David Cohen, who said it will help “to advance our countries’ shared priorities in the Indo-Pacific region.”

The Liberals will have bureaucrats explain the details of their strategy Monday in a technical briefing; these events usually take place ahead of a ministerial announcement.

This report by The Canadian Press was first published Nov. 27, 2022.