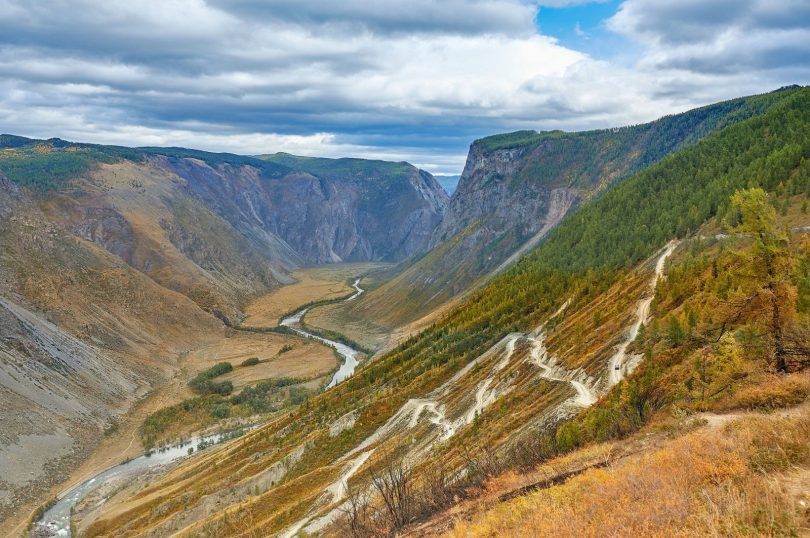 A road or a path is defined as “the distance that is overcome to go from one place to another on land, in air or on water,” in a lexical meaning and as “the remedy, method to be used to reach a goal” in the figurative sense. Some paths are easy, some are difficult. There are paths to our loved ones, paths home, paths to cures, paths to success, some requiring physical, some spiritual steps to reach from one point to another.

Roads may be formed by natural causes or are human-made.

The first roads in history were self-made paths on routes used by animals. Over time, these roads began to be used by people.

Some roads, which are almost a work of art with their architectural structure, can be very dangerous and some can be quite romantic.

The Silk Road, which is one of the oldest trade routes in the world between Far East Asia and the Mediterranean, has been the way of not only merchants but also sages, armies, ideas, religions and cultures from East to West and West to East. It only started to lose its importance with later geographical discoveries.

With the discovery of oil resources, the Silk Road started to gain importance again, new roads were built, transportation to uninhabited areas was facilitated, and the region was industrialized. Likeiwse, old trade routes were repaired and used for touristic purposes.

The period of geographical discoveries, also known as the Age of Discoveries, was a historical period that was initiated by Portuguese and Spanish captains from the first half of the 15th century to the middle of the 17th century with the aim of reaching the richness of spices and precious metals in Asia and finding alternative trade routes. It led to the discovery of new continents, oceans and overseas lands by the Old World.

Let’s ponder a bit about the value of roads, with are with all their meanings, their existence and their necessity from past to present.

For instance, many voyagers were on their way to explore, not to arrive. Maybe this is why people still build new roads, linking cities, villages and islands, stitch by stitch, like embroidery.

The paths that we will examine below are particularly challenging and unusual, even by today’s standards.

The Yungas Road is a highway and a cycle route about 60 kilometers (37 miles) long that links the city of La Paz and the Yungas region of Bolivia.

It was considered dangerous because of its steep slopes, narrow single track, lack of guardrails, rain and fog, and was nicknamed the “Road of Death.”

The Trans–Siberian Railway is a network of railways connecting Western Russia to the Russian Far East. With a length of 9,289 kilometers from the capital Moscow to Vladivostok, which is situated along the Sea of Japan, it is the longest railway in the world. It also stretches to Mongolia, China and North Korea via connecting lines.

It was built between 1891 and 1916 and has been an important trade and transportation line.

Skippers Canyon is a historical and natural gorge a few kilometers north of New Zealand’s Queenstown, approximately 22 kilometers long. The need for transportation increased when it became a popular area for gold mining in the 1800s, and the road was completed in 1890.

The Tunnel of Love is a section of industrial railway located near Klevan, Ukraine, that links it with Orzhiv.

It is a railway surrounded by green arches and is 3 to 5 kilometers in length.

It is known for being a favorite place for couples to take walks since trains pass only three times a day.

The Veluwemeer Aqueduct is a 25-meter (82-foot) long navigable aqueduct – also known as the water bridge – located over Veluwemeer Lake in Harderwijk, Netherlands.

It was opened in 2002 and connects the Dutch mainland to Flevoland, built by Dutch architects and fascinated the world.

A part of the road remains under the lake and an average of 25,000 vehicles pass through it per day.

The upper part is a 25 meters long, 19 meters wide and has a 3-meter-deep access canal, through which small boats pass.

On the sides of the road, there are pedestrian paths for those who want to enjoy this view.

Tianmen Mountain, meaning Heaven’s Gate, is a beautiful spot in Zhangjiajie, in the northwestern part of Hunan Province, China. This mountain dazzles with its 99 winding roads and 999-step staircase.

Tianmen Mountain attracts the most attention with its glass-bottomed bridge, which is at an altitude of 1,432 meters and is 60 meters long, making you feel like you are walking on air.

Carved along and through a mountainside in China, the tunnel links the village of Guoliang to the outside through the Taihang Mountains situated in Huixian, Xinxiang, in the Henan Province of China.

It is known to have been built by a group of villagers, mostly with hammers and chisels, without access to power tools.

This 1.2-kilometer-long, 5-meter-tall and 4-meter-wide tunnel was opened to traffic on May 1, 1977, turning the village into a tourist attraction.

Lombard Street is a street in San Francisco, California, U.S. The street is famous for its sharp bends.

The one-block section in the eastern part of the Russian Hill neighborhood has gained a reputation as the “world’s most crooked street.”

It is a major tourist attraction, receiving around two million visitors per year and up to 17,000 per day on busy summer weekends.

Among the most treacherous roads in the world, the Derebaşı Bends in Turkey’s Black Sea region is an adventure wonderland for thrill-seekers.

Traversing the 1,800-meter-high Soğanlı Mountain between inland Bayburt and coastal Trabzon provinces, the 3.5-kilometer pass has 13 hairpin bends, said to be impossible to handle in a single maneuver.

Due to its high elevation in the mountains separating the rainy and humid Black Sea region from the continental eastern Anatolia region, Derebaşı Bends often experiences fog, rain, landslides and avalanches, adding to its risk factor. For six months of the year, snowfall blocks all transportation on the route.

It is said to be slightly more treacherous than Bolivia’s Yungas Road, also called the “Road of Death.”

Although the Atlantic Ocean Road in Norway was proposed as a railway at the beginning of the 20th century, it was abandoned. Serious planning of the road started in the 1970s, construction started in 1983 and it opened to traffic on July 7, 1989.

It is an 8.3-kilometer-long section of County Road 64 that runs through an archipelago in Hustadvika and Averoy municipalities in More og Romsdal county, Norway.

It passes by Hustadvika, an unsheltered part of the Norwegian Sea, connecting the island of Averoy with the mainland and Romsdalshalvoya peninsula.

It is built on several small islands and skerries, which are connected by several causeways, viaducts and eight bridges – the most prominent being Storseisundet Bridge.

Today, it is protected as a cultural heritage site and classified as a national tourist route.

Our path has led us to the end, but let’s end with good wishes, and as Turks would say to travelers on the road: “Yolun açık olsun,” or God speed!