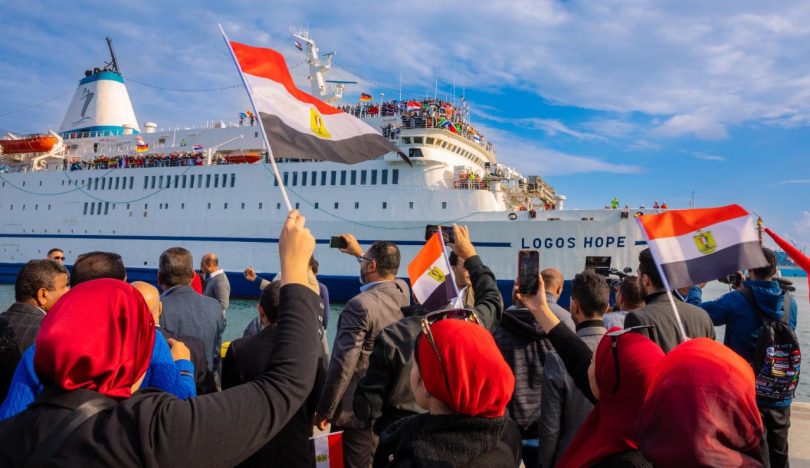 With a crew of nearly 350 volunteers of more than 60 nationalities, Logos Hope ship is currently docked at Port Said, a major seaport in the Mediterranean Sea in northeastern Egypt, holding the world’s largest floating book fair as part of its humanitarian mission to spread knowledge and foster cultural exchange.

It is the first destination for Logos Hope in 2023, but not the first time for the ship to visit Egypt, for the floating book fair had a successful spell in Egypt in 2010.

James Berry, the captain of Logos Hope, described the experience as “very exciting,” saying it is an excellent opportunity for cultural exchange between the crew and the locals.

“It is also great for the visitors that they come on board, meet people from so many different countries, share and learn something about their cultures and build lasting relationships,” the captain, who is a British citizen, told Xinhua.

Logos Hope’s two-week book fair in Egypt opened on Thursday and will continue until Jan. 21. The ship, which had visited Beirut, the capital of Lebanon, before its stop at Port Said, is expected to depart Egypt on Jan. 23 for Jordan.

The motto of Logos Hope is “sharing knowledge, help, and hope.” The book fair offers over 5,000 titles of books in various fields, including science, literature, education, hobbies and more, all sold at affordable prices to serve the purpose of sharing knowledge.

Mahmoud Taha, an Egyptian lawyer, was strolling around the book fair when he decided to purchase two books on spiritual leadership and teamwork.

“I came to attend the opening of the world’s largest floating book fair and benefit from the valuable books it offers. I also came to talk to the crew members and learn about their different cultures,” he said.
Among the visitors was a family of an Algerian wife, an Egyptian husband and their young daughter.

“We have been waiting for the arrival of the ship. We as a family are book lovers and reading is our hobby. We have already bought some books and we’re going to buy some more,” said Fulla-Yasmine Mohamed from Algeria.

Logos Hope was built in 1973 and purchased in 2004 by GBA Ships, a Germany-based non-profit charity organization. GBA stands in German for Gute Bücher für Alle (Good Books for All).

According to Edward David, director of Logos Hope, the ship began its charity mission in 2009, travelling from Europe to the Caribbean and other parts of the world.

“Since we purchased it, we’ve used it to promote education, help and hope in different parts of the world,” the ship director, who comes from Malaysia, told Xinhua, noting Logos Hope has visited more than 100 ports across the world over the years.

The Logos Hope team also provides simple services for the communities with which they work, such as visiting nearby hospitals, schools, and orphanages, and providing as much community care and aid as possible.

The ship received a warm welcome from Port Said authorities, which offered facilitations to Logos Hope in coordination with concerned Egyptian ministries.

“We are proud to have them here. We cooperate with them and we provide them with all support through our coordination with all the state authorities. The Egyptian government welcomes the ship and provides it with all support during its experience in Egypt,” said Amr Osman, vice governor of Port Said.