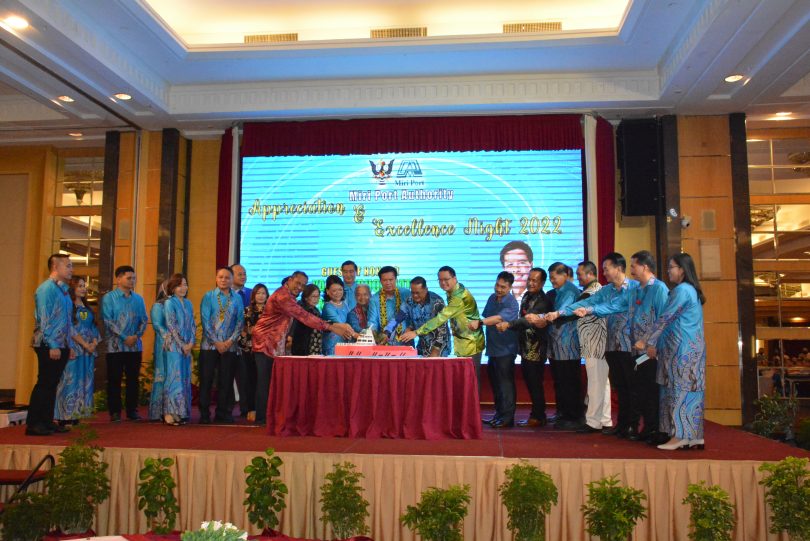 Majang (10th right), Paulus (11th right), Serawa (12th right) together with MPA board of directors and business partners join the cake cutting ceremony at the event.

The Deputy Minister of Infrastructure and Port Development II pointed out as Sarawak is embarking into digital economy, Fourth Industrial Revolution (IR 4.0) and big data revolution, the port industry in the state should not be left out from this development wave.

“Ports of today are facing the increasing pressure from customers to increase the industry’s efficiency and customers’ expectations.

Magang added that ports such as MPA play the catalystic role of economic development in the region by facilitating trade through the provision of logistics port services, making it necessary for ports to be efficient in their role.

“Ports are essential to support economic activities since they act as a crucial connection between sea and land transport, particularly in Sarawak.

“Miri Port indeed has significantly played its important role as well as in the development of Miri from a humble town to city status in 2005. Now, Miri is a vibrant city in the northern region,” he said.

He stressed the state government is fully aware of the importance of the role the port plays in providing shipping connectivity and interfacing with other ports or nations of the world.

He said it was currently looking seriously into port development as well as the proposal to deepen access channels and the provision of other navigational aids to ensure vessels safety while navigating through the access channels at Kuala Baram.

“I truly believe with the deeper access channel, and supported by the well-established and excellent management systems in place, Miri Port will be able to play its significant role as catalyst of economic development for the northern region of Sarawak and become an important port that links Sarawak’s northern region trade to the rest of the world.

“This augurs well with the state’s vision and aspiration to become a developed state with high income economy by 2030,” he said.

Meanwhile, MPA general manager Serawa Budol in her welcoming speech thanked all her employees, including retirees, for their enormous contribution in helping shape MPA into what it is today.

She said MPA certainly made its mark and contributed its fair bit, especially to state civil service over the past 39 years since its establishment in 1982.

“Despite many challenges, especially the shallow access channel at Kuala Baram, MPA managed to sustain its operational excellence and successfully turned around the port’s performance from a loss to profit-making entity in 2019.”