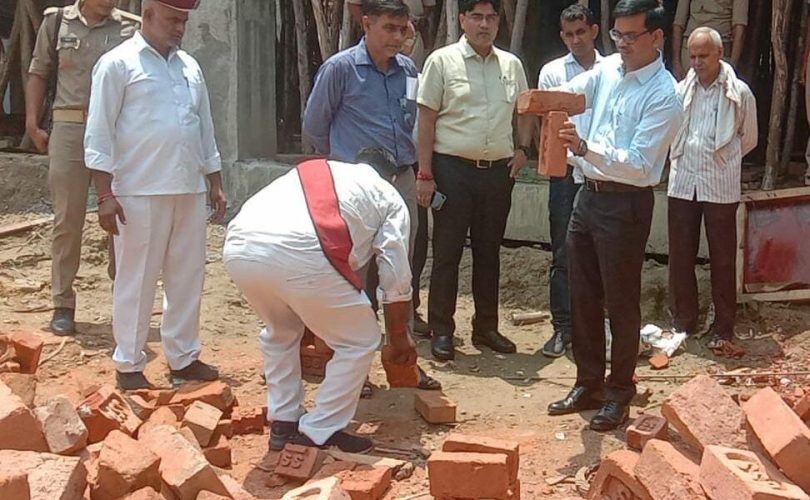 DM Praveen Kumar Lakshakar inspected the 50-bed multi-divisional hospital under construction on the land of Bhairon Prasad Jaiswal Trust within the civil lines of the city. Meanwhile, Additional District Magistrate Shiv Prasad Shukla was also present. Less cement and more sand was used in the construction. Not only that, the district magistrate ordered to replace the substandard brick. The chief medical officer paid two crores of rupees to the labor organization for the building being constructed at a cost of around 17 crores.

Seeing the beam contrary to the norm, the DM warned

The facility supervisor and contractor were present during the inspection. The quality of the beams produced was not found to comply with the standard. Pole and tada were found in many places in the beam. The finish of the beam was found to be incorrect. The ratio of cement and sand used for the masonry carried out in the walls was not found to be correct.

If yellow is found in the brick key, its quality is tested. Change of bricks and instruction to use quality bricks. To check the quality of the bricks, he checked using the native method.

Manufacturing with respect for quality, otherwise blacklisting will be done in FIR

The district magistrate warned that the quality should not be found to be poor on closer inspection. Otherwise, blacklisting will be done by filing a case against the enforcement agency. The district magistrate expressed his displeasure with the slow pace of work. He asked to speed up the work by increasing the number of masons and workers.

There are more news…