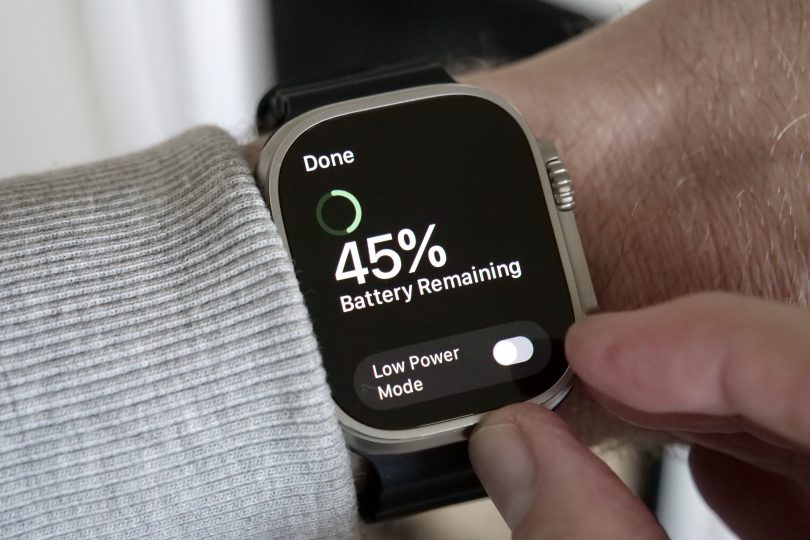 The Apple Watch Ultra’s Low Power Mode received an update in watchOS 9.1 to supposedly extend the battery life of the smartwatch to 60 hours in certain situations. The question is, can it really last this long on a single charge, and what’s it like to still use the smartwatch when you activate the special mode?

I found out over the course of a few days, and in the process, discovered Apple is underselling the feature; it’s even more capable than the company suggests. In fact, Low Power Mode may just change the way you use and charge your Apple Watch Ultra from now on.

Turning on Low Power Mode is very simple. Swipe up on the Apple Watch’s main screen and tap the battery percentage icon, then look for the switch next to the Low Power Mode option. Tap it, read the information, and turn the feature on. It’s very easy, and although I’ve been using it continuously, you could easily turn it on and off throughout your day to conserve battery power. A yellow circle appears at the top of the watch face when Low Power Mode is active.

What does it mean to the Apple Watch Ultra’s functionality when you turn the mode on? The always-on screen is turned off, cellular connectivity only updates once an hour, sensors run at a reduced capacity (including the heart rate sensor, which doesn’t run in the background, and checks for an irregular heart rate less frequently), workouts are no longer automatically detected, and blood oxygen measurements aren’t taken. Otherwise, the watch works as usual.

Low Power Mode is available on any Apple Watch running watchOS 9.1, but the amount of time the battery lasts will vary depending on the model, and we are concentrating on the Apple Watch Ultra here.

Apple states with Low Power Mode, you should be able to complete a triathlon made up of a 2.4-mile swim, a 112-mile bike ride, and a 26-mile run. I wasn’t about to put that to the test — because I didn’t want to die. Instead, my plan was to turn on Low Power Mode, go about my days as normal, use the Apple Watch as usual, and wait to see how close it could get to the 60-hour target.

Does the battery really last for 60 hours?

I put the Apple Watch Ultra on at 9 a.m. on Tuesday morning with 100% battery and immediately activated Low Power Mode. If the battery really could last for 60 hours, it should then be ready for a recharge at about 9 p.m. on Thursday. Little did I know the Apple Watch Ultra wouldn’t be ready for a recharge at that time, and in fact, it would surpass my expectations by some considerable distance.

Until this point, I’d checked and interacted with notifications as usual, controlled music playing on my iPhone, and looked at my activity levels during the day. I’d received “move” reminders, but the automatic hand-washing timer was disabled. I wore the smartwatch all day and left it turned on overnight, but didn’t track sleep. The Watch Ultra is just too big and bulky to comfortably wear in bed.

On Thursday early evening, I worked out for almost an hour — strength training and indoor cycling — and tracked it with the Apple Watch Ultra. While the display on the watch didn’t update my heart rate constantly, it still recorded everything, and the records showed up as usual in the Fitness app on my iPhone. In some of the workout modes, not all the usual data will be collected. Afterward, I spent 30 minutes or so using the smartwatch in general, including checking emails.

At 9 p.m. Thursday, when the 60-hour period was up, the Apple Watch Ultra still had 56% battery remaining. Used minimally in Low Power Mode like this, it’s realistic the Apple Watch Ultra could continue on and reach 120 hours of use on a single charge, even with another hour’s worth of workouts. That’s five days. It’s worth noting I didn’t have the reduced GPS/heart rate workout feature enabled, as I didn’t track any hiking or running workouts, but the test shows how effective it will be if you use it.

Everything it’s cracked up to be — and more

The point of this experiment was not really to see if you could live with the Apple Watch Ultra in Low Power Mode all the time, as this would be a waste of what is a very capable, and very expensive, smartwatch. Instead, it was to understand if you could realistically stretch the battery out over more than a few days through careful use of the feature, should you only need your Apple Watch Ultra to be fully functional at certain times when out and about, and to understand if very active people needed to worry about charging.

It’s absolutely clear Low Power Mode means you don’t have to pack a charger or worry about finding a way to charge the watch, over a long weekend away, even when tracking activity. It’s simple to activate and deactivate when needed and surprisingly customizable based on your tracking requirements, too, meaning you can manage power consumption and functionality to match your needs. Remember, seven hours in Low Power Mode reduced the battery by a single percent on my first day using it.

Will you notice Low Power Mode is on? Yes. The always-on screen is turned off, but like the Apple Watch SE 2, the wrist gesture accuracy is excellent; just by lifting your hand, the screen immediately lights up. I also received notifications and other reminders, so the Watch UItra never felt redundant on my wrist. Expect some power-intensive features, like making calls, to be slower than usual too. I wouldn’t use Low Power Mode all the time, but when I don’t need the smartwatch’s full capabilities, switching it on would obviously be beneficial in certain circumstances.

Although I have not completed the triathlon Apple put as its benchmark, I don’t see any reason why the Watch Ultra, in Low Power Mode, couldn’t track one and last for that amount of time on a single charge. For everyone else who isn’t planning a triathlon, think about using Low Power Mode more often as a way to reduce the need to charge the battery in your smartwatch. It’s far more effective than even Apple claims it is.