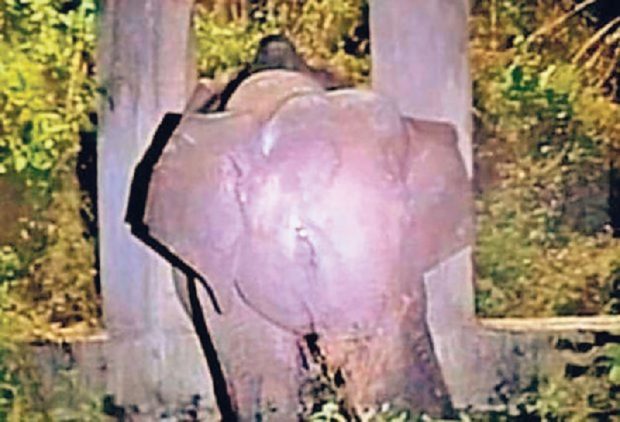 Madikeri: A wild elephant was trapped between the two cement poles used as fencing at Thonduru village in Madikeri. The forest department officials had to think outside the box to rescue the pachyderm as the enraged elephant herd hampered rescue operations.

On Friday evening, a female elephant had been trapped between two cement poles at Thonduru village that were erected as fencing to keep elephants in the Anekadu Reserve away from human habitations.

The forest department officials who came to know of the incident rushed to the spot for rescuing the pachyderm. After evaluation, it was decided to carry out the rescue using a JCB/earthmover. However, the elephant herd that was nearby attacked the officials, forcing them to delay the operation.

Left with no other option, forest officials poured water mixed with vegetable oil and detergent powder on the elephant. The slippery surface created by the mix helped the elephant free itself.

Being stuck for a long time, the tusker was enraged and tried attacking its rescuers, creating panic. After a while, it rejoined the herd and disappeared into the forest.