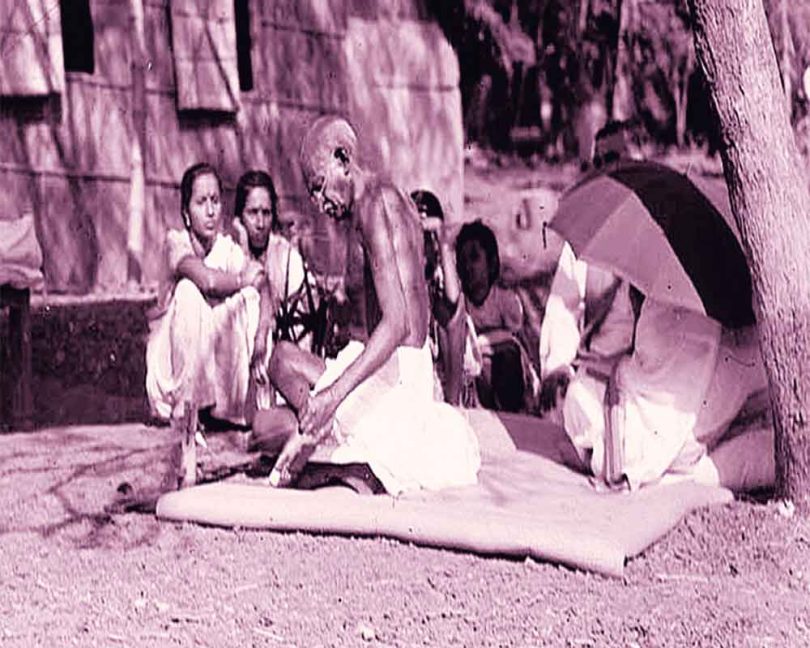 India was earlier known for its flourishing trade in spices and textiles, along with precious metal and stone. AfterIndependence, India inherited an economy that was one of the poorest in the world with no industrial base and mostlydevastated land deprived of forest and fertility. The Britishleft a poor base for the already developed handicraftsuniversally acclaimed for their quality and craftsmanship.

In Mahatma Gandhi’s view,industrial civilisation fostered by British rule was the main cause of India’s social, ecological and economic distress. He believed that India’s salvation lay in the restoration of its ancient civilisation where economic progress and moral progress intertwined.

Gandhi knew that “India lives in her seven lakh villages” thereforethe economic and social revival of these villages is a pre-condition for reconstruction of India. He wanted to make the villages self-sufficient and build a rural economy which is not solely based on agriculture and allied activities but also has strong rural industries thereby generating employment for the villagers.

Gandhi once said, “If the village perishes, India will perish too”. He imagined his ideal village will consist of cottages made from locally sourced materials with sufficient light, ventilation, proper sanitation and produce its own grains, vegetables, fruits, and Khadi. It will have wells, places of worship, a common meeting place, a common grazing field, a co-operative dairy, primary and secondary schools where vocational training will be imparted and panchayats for settling disputes.

Gandhi was againstthe concentration of power and the system that makes the individual subservient to the machine and material. He wanted a development process which is harmonious, poverty free, nonviolent, based on cooperation and ethics. Therefore, he proposed an ecological model centered on limitation of wants in contrast to the modern civilization that promotes material welfare and individual profits. He was sure that too much emphasis onmaterialism could lead to violence, unhappiness and a culture of oppression, exploitation, and dominance.

Gandhi’s concept of sustainable development is rooted in a holistic approach which emphasizes the development of an individual and society as a whole in connection with nature.By preaching “simple living,” Gandhi sought to curb both human greed and mindless exploitation of natural resources. He said, one should know the difference between ‘need’ and ‘want’ and taking more than required to fulfil our need, in a way is theft from other species, humans and the future.

Gandhi often said,”The earth provides enough to satisfy every man’s needs, but not every man’s greed”.

He warned against the perils of massive industrialization and unsustainable patterns of consumption in the west. He described the process of urbanization as a “double drain”, i.e., it will harm the villages and the villagers and thus proving fatal to both.Hence, in order to ensure economic balance, it is important that the urban sector does not drainthe rural sectorand shift the focus from centralization to decentralization. He argued, that a technologically sophisticated economy will have two major consequences: it would disempower the economic autonomy of the masses and greatly undermine the ecological fabric on which millions depend.

Therefore,to increase the productivity, we should avoid indiscriminate use and non-selective adoption of imported technology. He foresaw that the development of small-scale technology could boost efficiency in rural production without displacing rural labour andadvocated an appropriate technological mix with controlled production to maximise the social benefits of science and technology and to maintain a proper balance between man and environment.

He emphasized the development of village and cottage industries where handicrafts, spinning, weaving, and likewise remain constant sources of income andrevenue generation. This will protect the village crafts and the workers from the crushing competition of the power-driven machinery and ensure jobs for the villagers.

Gandhi ideas couldnot be more relevant than today when India is witnessing jobless growth and facing the worst unemployment crisis in this pandemic situation. It is evident that the current paradigm of developmentis causing serious environmental problems whichis neither ecologically nor socially sustainable. It is leading the planet into a vortex of inequality, widening the rift between rich and poor, and proved inadequate to address the issues of the millions living in poverty.

Gandhi was well aware of the pitfalls of such developmentas well as the consequences of unequal distribution of wealth between different classes.The World Inequality Report 2022 ranked India as the most unequal country in the world. The top 10 per cent and top one per cent hold 57 per cent and 22 per cent of the total national income,respectively,while the bottom half’s share has come down to 13 per cent and they barely have anything. Thomas Piketty asserts in his influential book, Capital in the Twenty-First Century, that inequality is rapidly intensifying and global cooperation is desirable to prevent the wealthy from simply shifting assets into other jurisdictions.He proposed, an extremely high income-tax rates on upper-income taxpayers along with a global wealth tax.Economic progress devoid of moral elements will deepen divisions and increase dissensions among people.

With growing population, the increase in food demand has considerably altered land-use practices whichhas led toagricultural intensification at the expense of forests and grazing lands.Increased use of chemicals and fertilizers are causing pollution, soil and ground water contamination, loss of biodiversity and killthebeneficial organisms whichincreases fertility.Gandhi believed in sustainable agriculture and advised the use of bio-manures and bio-pesticides to improve soil fertility. Today, the experts in the healthcare are emphasizing the importance of chemical-free crops because excessive amounts of chemicals in plants are causing health related problems in humans as it affects kidneys, lungs, may also cause cancer and congenital abnormalities like malnourished children, etc.

Gandhi’s understanding of the ecological crisis was far ahead of his time and anticipated many of our greatest challenges of today. Knowing that afforestation can be an effective step to combat future water crisis, he urged people to plant trees. He also proposed, water harvesting for irrigational purposes to prevent droughts and famines.

Climate change has once again shed light on Gandhi’s philosophy of self-sufficiency and sustainable development and made the world realize the importance of practicing a lifestyle that has minimal environmental impact. These principles remain the driving force behind all the UN’s climate agreements, environmental conservation treaties, and sustainable development goals. Many of his ideas foreshadow the holistic thinking behind the “Agenda 2030: Transforming Our World” for Sustainable Development. The central idea of Agenda 2030 is captured by the tagline “Leave No One Behind.” The plan aims to achieve prosperity for people and the planet and calls for “transformative” change, which includes changing the way we live, produce, and consume.

Thus, the current climate crisis and the need to find sustainable means has brought a long-suppressed and quintessentially Galbraith’s unanswered question to the fore — “How much should a country consume?” — along with Gandhian corollary — “How much should a person consume?”. They have become fundamental questionsfor the 21st century and will dominate the intellectual and political debates.

(The writer is a former Indian Forest Service officer. The views expressed are personal.)