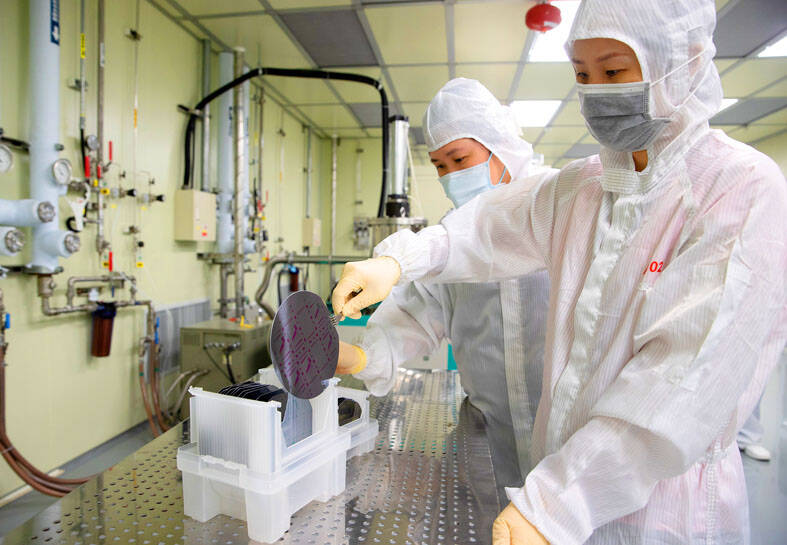 SPILLOVER:
Momentum slowed sequentially amid global inflation, which the economic ministry said would continue to weigh on local manufacturers

Taiwan’s manufacturing output last quarter rose 3.75 percent year-on-year to NT$4.36 trillion (US$139.88 billion), thanks to launches of new mobile devices by major brands, as well as the effects of emerging technologies and digital transformation business opportunities, the Ministry of Economic Affairs said on Friday.

Manufacturing output grew annually for an eighth straight quarter last quarter, but the increase paled in comparison with 13.57 percent growth to NT$4.51 trillion in the second quarter, which the ministry attributed to poor market conditions in traditional industries, as well as equipment maintenance and reduced production in the chemical and steel industries.

The increase last quarter was led by the electronic components industry — the manufacturing sector’s most important segment — which posted a jump of 11.9 percent to NT$1.39 trillion, the highest quarterly level on record, the ministry said.

Chip production increased 43.83 percent to NT$784.6 billion, the highest for a single quarter, as semiconductor companies benefited from rising demand for chips used in high-performance computing and automotive electronics, the ministry said.

As international tech brands are planning to launch new products by the end of the year, chipmakers profited from a stocking effect in the third quarter that also drove semiconductor output, the ministry added.

The computer, electronics and optical components industries accelerated production in the third quarter on the back of robust demand for data center-related equipment, while a major improvement in key components boosted production of servers and networking equipment, the ministry said.

However, LCD panel makers continued to register declining output due to weakening demand for consumer electronics, with their production value last quarter decreasing 54.58 percent to NT$110.6 billion following an annual drop of 33.7 percent to NT$157.3 billion in the previous quarter, the ministry said.

In the traditional industries, producers of chemical materials and base metals last quarter posted a decline in output of 18.54 percent and 19.31 percent respectively to NT$427.58 billion and NT$407.9 billion from a year earlier, as weakening demand in the end market led to inventory depletion in the supply chain and reduced production by major manufacturers, the ministry said.

Suppliers of petroleum and coal products saw their output increase 47.52 percent to NT$317.3 billion as global crude oil prices remained high and firms were committed to expanding exports, but last quarter’s growth slowed in comparison with an annual increase of 73.28 percent to NT$346.8 billion in the second quarter, the ministry said.

The machinery equipment industry’s output growth slowed to 3.41 percent last quarter, from the previous quarter’s 5.91 percent, as increased orders for semiconductor equipment were offset by reduced production of woodworking machinery and electric hand tools due to declining US and European orders.

Nonetheless, the output of vehicle parts grew 11.76 percent last quarter, compared with an annual decline of 5.84 percent in the second quarter, as domestic automakers benefited from a domestic sales boom, while component shortages gradually eased.

The ministry said it remains positive about growth momentum in the manufacturing sector, which is expected to be buoyed by demand for new consumer electronics and emerging technologies such as 5G, high-performance computing and automotive electronics.

However, global inflation and monetary tightening by central banks, as well as the war in Ukraine and restrictive COVID-19 measures in China, could continue to weigh on global economic growth and affect local manufacturing output, it said.