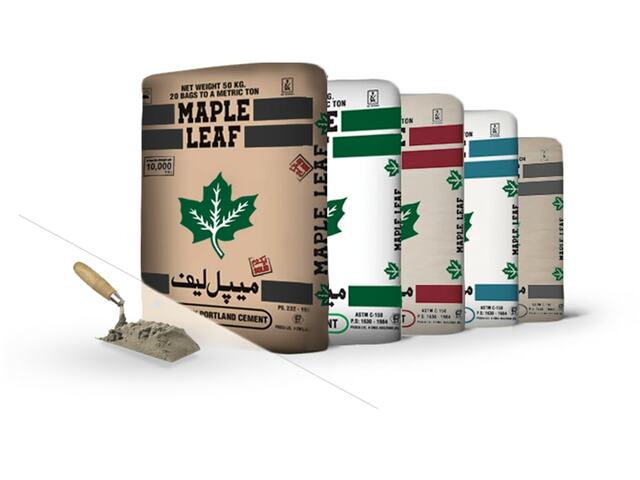 Maple Leaf Cement Factory Limited (PSX: MLCF) was established in 1956 by the collaboration between the West Pakistan Industrial Development Corporation and the Government of Canada. It is part of the Kohinoor Maple Leaf Group which is involved in the manufacturing of textiles and cement in Pakistan. Maple Leaf Cement is the largest single cement production site in Pakistan, currently operating three production lines for the production of grey cement and one line for white cement where the company owns more than 90 percent market share. The current total installed capacity for clinker production is 5.7 million tons annually (or 19000 tons per day) having grown from just 30,000 tons when it was first established. The company markets and sells its products all over Pakistan with a market presence mainly in the North and Central regions. Meanwhile, MLCF also exports cement to Afghanistan, the Middle East, and several African countries.

Over the past five years, Mapleleaf’s revenue flow has doubled, despite a slowdown in volumetric sales in the last two years. The company has maintained a healthy market share though in terms of total dispatches and has been expanding capacity over the years to match the growing size of the market—safe for some hiccups across the way. In Nov-22, the company added a fourth line in its production facility to add to the current capacity and take it up by 7000 tons per day. This translates to roughly a combined capacity of 7.8 million tons of annual clinker production across its four plants. In addition, a new waste heat recovery is being added to add captive power capacity to 37 MW.

Coal and energy prices are the dominant cost factors for Mapleleaf and hikes in fuel and coal prices in the international markets and rupee depreciation tends to greatly affect company margins. Prudent and timely procurement of coal, maintaining an optimum share of coal mix from various sources, and inventory management set Mapleleaf apart from other players in the same capacity league. Since FY18, the company’s revenue and cost per ton sold (calculated using sales statistics) had stayed well and ahead of rising costs by the company’s strong pricing and the right sales mix, with the exception of FY20 when margins turned negative due to costs taking over. Since then, the company has only improved its margins.

What has really helped the company is the use of coal-fired power plants and installation of solar power projects as well as waste heat recovery plants which have helped cut down on power costs. Meanwhile, during FY22, the company moved to Afghan and local coal to bypass the massive price rallies in the international markets for coal due to the war breaking between Ukraine and Russia. The other competitive edge the company has are its transportation costs which are curtailed under a transport agreement signed with Pakistan Railways. The company’s overheads (as a share of revenue) have fallen over the past five years from 8 percent to 7 percent.

Finance costs are also in control, only ballooning to 10 percent of revenue during FY20 but falling considerably down to 4 percent in FY21 and FY22. The new expansion comes with a 70 percent debt component where the company has attained SBP’s concessionary long-term financing which should keep costs from running amok over the coming years. Together with finance costs, the expense portion of the income statement is still around 11 percent pushing earnings down. Therefore, the profit margins have remained more or less erratic between FY18 and FY22, turning red during FY20.

FY23 is not going to be easy, even though, the company enjoyed an earnings growth of 2.1x year-on-year, owing mainly due to robust pricing in key markets in the north where cement prices have increased nearly 50 percent over the span of the year. The company’s own revenue per ton sold rose by an estimated 66 percent in 1QFY23.

Meanwhile, costs also helped. Though overall costs have been on the rise; the company’s use of a favorable mix of coal from various more affordable sources allowed costs per ton to rise only 49 percent (lower in comparison to the revenue per ton sold). This contributed to margins growing to 28 percent, a substantial upgrade from last year’s 19 percent. However, the bane is overheads and finance costs which rose to 9 percent and 5 percent respectively from 8 percent and 3 percent of revenue. The latter rose due to long-term debt and higher interest rates. Together these constituted 14 percent of revenue in 1QFY23 which did put considerable pressure on earnings, though the higher gross profits saved the day.

But export markets are drying up and domestic demand is weak as construction costs have become prohibitively high for most materials. PTI’s exit has also left the Naya Pakistan Housing dream wasting away in the pipeline while development spending is going to be substantially reduced as the government firefights out of a massive financial crisis. It will therefore come down to how long cement prices can remain at the current levels and how much the demand decline exactly will be. Coal prices are down but imports will be expensive given the ever-expensive dollar. A new expansion online and reduced demand also means Mapleleaf will have a hard time keeping utilization high enough.