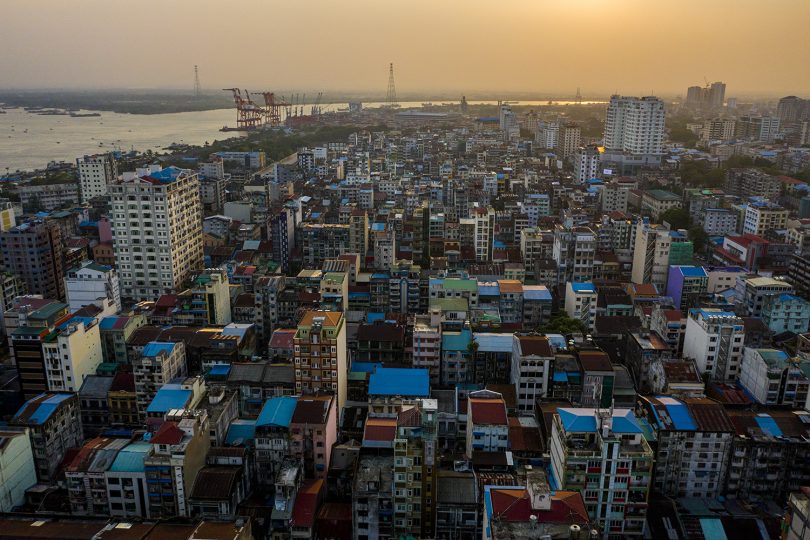 Real estate demand in Myanmar has surged amid a lack of trust in banks and a volatile kyat, with some cashing in while others see their dreams of home ownership slip away.

When Ma Kyi Kyi Lwin inherited K50 million from her late parents last year, she debated whether to invest it or deposit it in her bank account, but amid the economic uncertainty of post-coup Myanmar, the latter option made her uneasy.

When the dollar rate and gold prices began to rise in July, she decided her safest option was to invest in real estate.

“Investing in houses and land is more secure than putting money in a bank account, so I bought an apartment in North Dagon,” she said.

By then, real estate prices were already surging. The 400 square foot fifth-floor apartment she bought in a housing estate in the township would have sold for about K16 million in 2020, Kyi Kyi Lwin said, but she bought it for K26 million.

Still, she believes the investment paid off, as the property is worth even more today.

Other prospective homeowners have not been as fortunate. Ko Nyan Lin, who had been saving for more than a year to buy a house in Shwepyithar Township, now finds himself priced out.

The house he and his wife were interested in buying would have cost about K150 million in 2020 but rose to about K350 million by July this year.

“Now that the price has more than doubled, I can’t afford to buy it,” he told Frontier. “Owning a house is gradually becoming further away from us.”

The real estate boom comes amid economic turmoil caused by the February 2021 coup, a lack of faith in Myanmar’s financial institutions under the military regime, and erratic policies enacted by the Central Bank.

“Prices are going up everywhere. The demand is so high,” said Ma Zune Pwint*, a real estate agent in Yangon’s downtown Lanmadaw Township. She said a 15-by-60-foot apartment in Lanmadaw valued at about K10 million before the coup would fetch nearly K30 million today.

Zune Pwint said demand rose sharply in April, after banks eased restrictions on withdrawals, which had been imposed by the Central Bank after the coup to avoid a crippling run on domestic banks.

“That was when many people withdrew their money from their bank accounts and used it to buy real estate,” she said. “When the US dollar exchange rate was high, demand for real estate was high.”

U Kyaw Min*, who formerly held a senior position with a private bank, said depositors had lost trust in domestic banks after the Central Bank limited withdrawals from accounts and ATMs a month after the military seized power.

“Since that time, the people don’t trust banks anymore,” Kyaw Min said, adding that foreign exchange market volatility that saw the kyat fall dramatically against the US dollar this year had also affected confidence in the Myanmar currency.

The value of the kyat against the dollar has fluctuated wildly since the coup, with the Central Bank declaring a fixed exchange rate that is often quite far from the actual market value.

“When the dollar rose sharply, they no longer trusted the kyat and invested in gold, real estate and US dollars,” Kyaw Min said. “Because of the volatility affecting exchange rates and gold prices, people invested in real estate because they believe it is more stable.”

He said a return to stability in the real estate market would depend on the banking system recovering from a lack of trust and an end to currency market volatility, neither of which looks likely any time soon.

“I cannot say when the situation will return to normal. If people have no trust in banks and the national currency, the economy will continue to get even worse than it is now, that’s for sure,” he said.

There was a similar surge in real estate prices after Myanmar opened up under the pro-military Union Solidarity and Development Party in 2011, but prices began to stabilise around 2015.

The big winners of the property boom are real estate agents and property owners, especially those who own land in Yangon’s outskirts, which were previously seen as less desirable, but now fetch a much higher price.

The real estate market used to be slow in the heavily working-class northwestern Yangon township of Shwepyithar, but that changed dramatically this year. Ko Hein, who has been a real estate agent in Shwepyithar for more than two years, said 2022 has been his busiest year yet.

“I am selling many houses and properties; there are transactions every day,” he said. “I spend much of my day riding around the township on my motorbike finding people who want to sell and I’m also taking constant calls from buyers and sellers.”

He pointed to a house on a typical Shwepyithar plot measuring 20 feet by 60 feet.

“Before the military coup, this plot was only worth K 7 million, but last month [September] it sold for about K35 million. But you can’t even buy it for that price today,” he told Frontier on October 20.

Real estate agents in Yangon said buyers had initially focused on the downtown area, but when prices rose, they began turning their attention to townships in outer areas of the commercial capital.

“When prices rose downtown, they began buying in North Dagon and when prices went up there, they began looking at Shwepyithar and Hlaing Tharyar,” said Ko Hein.

“Some people are buying in bulk. Their objective is to buy land rather than hold cash, but the prices went up so much that it was scary,” he said.

Prices are also booming in the military-dominated capital of Nay Pyi Taw, possibly because it’s seen as more stable than other parts of the country. An increasingly bitter civil war is leaving entire villages burned by marauding Tatmadaw soldiers, with even some major towns becoming fierce battlegrounds.

U Nanda Aung, an agent with Zayar Real Estate Services with more than a decade of experience, said people are also drawn to the isolated and mostly rural capital because of the larger plots of land on offer.

“Initially, people bought land in busy downtown areas, such as Tha Pyay Gone and Shwe Kyar Pin in Zabuthiri Township,” he said, adding that after the initial rush, buyers moved to Ottarathiri Township and then more outskirt areas.

Nanda Aung said that before the coup, a 100-square-foot plot with a house in the Tha Pyay Gone neighbourhood sold for about K350 million. “Now, it’s up to K1.5 billion,” he said.

“Records show that about 30 plots a day were changing hands in Nay Pyi Taw in recent months; that’s almost 800 sales a month,” he added.

But it’s not just Myanmar’s major cities that are seeing a surge in prices.

In July, Aye Khine began receiving offers for her land, despite not even advertising it for sale. After receiving five offers in a month, she accepted one.

“I resold the two plots for K90 million. I never imagined when I bought the land that I would receive such a high price for it,” Aye Khine said.

With so much money changing hands, it’s no surprise that working as a real estate agent is becoming increasingly attractive, especially with the economy in shambles in many other sectors.

“If a house sells for K200 million, the agent will get K2 million,” said Zune Pwint, the agent based in Lanmadaw.

She said with commodity prices soaring, and most people’s income staying flat or even dropping, many are having difficulty just meeting their basic living costs.

The increase in the number of agents is not just anecdotal – membership figures from the Myanmar Real Estate Services Association–Nay Pyi Taw jumped from around 350 before the coup to 550 today.

Nay Pyi Taw real estate agent Nanda Aung said many others are working as agents informally without joining associations or getting licences.

“These days, government employees are also working as brokers, and so are shopkeepers. So many people have become brokers; it’s like a carnival,” he said. Brokers are informal real estate agents working without a licence.

Ko Hein, the real estate agent in Shwepyithar, said the increase in the number of brokers, and more speculative practices, are pushing up prices even more.

For example, he said a group of brokers bought a house in Shwepyithar in September for K35 million and sold it a week later for K45 million. “It’s unfair for ordinary people,” he said.

“I fear the prices,” Ko Hein said. He worries the bubble could burst and prices could collapse, leaving ordinary people who invested in real estate to avoid losing their life’s savings with less valuable plots of land.

Kyaw Min, the former bank official, said people putting money away in real estate can also have knock-on effects elsewhere in the economy.

“When the money doesn’t flow to the bank, it will not flow to the businesses. So small and medium enterprises find it hard to get money, which slows down the country’s economic development,” he said.

Kyaw Min said eventually prices will peak and fall back down again. “At that point, people who bought at high prices will suffer and lose their money,” he said, adding that only “speculators and brokers” will benefit.

* denotes the use of pseudonym for safety reasons