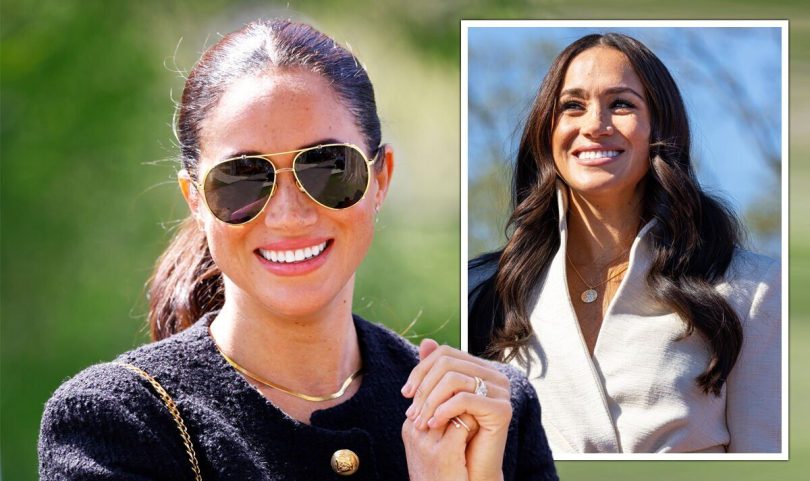 In September last year Prince Harry and Meghan Markle, the Duke and Duchess of Sussex, appeared on the cover of Time Magazine. They were dubbed two of the most influential people issue.

According to several sources, Meghan was wearing over £300k of jewellery. That is no mean feat for someone who no longer has access to the Royal Family’s official collection of heirlooms.

During her time as a royal, the Duchess only ever loaned one piece of jewellery from the Queen’s collection – her wedding tiara.

Besides this, unlike Kate, she never loaned gems belonging to the royal collection.

However, she has inherited, via her husband, pieces from her late mother-in-law.

READ MORE: How Meghan Markle’s style has changed after ‘more separation from the Royal Family’

On her other pinky finger, she wears two Duet Pinky Rings by American brand Shiffon Co, which are set with a petite natural diamond beside a larger natural diamond, representing one woman supporting another through a “pinky promise”.

Unlike Kate, who traditionally only wears rings on her ring fingers – Meghan is often seen wearing dainty bands on her thumbs and forefingers, an increasingly popular trend.

During the Platinum Jubilee celebrations – we finally got to spot the Duke and Duchess together with other members of the Royal Family, more than two years since they moved to Montecito.

As with all royal brides, the loaning of a royal tiara by Her Majesty is tradition, except of course when Lady Diana Spencer wore her own family tiara, The Spencer Tiara, at her wedding to Prince Charles at St Paul’s Cathedral.

Despite refutable rumours of an argument surrounding which one Meghan would wear, the newly minted Duchess of Sussex looked utterly ravishing with the Queen Mary Bandeau holding her 16 ft Givenchy veil in place.

The diadem was made in 1932 for Queen Mary, Prince Harry’s great-great-grandmother.

According to the Royal Collection Trust it “is formed as a flexible band of eleven sections, pavé set with large and small brilliant natural diamonds in a geometric design”, typical of the Art Deco period in jewellery design.

This detachable brooch was given to then Princess Mary of Teck, to celebrate her marriage to Prince George, Duke of York in 1893.