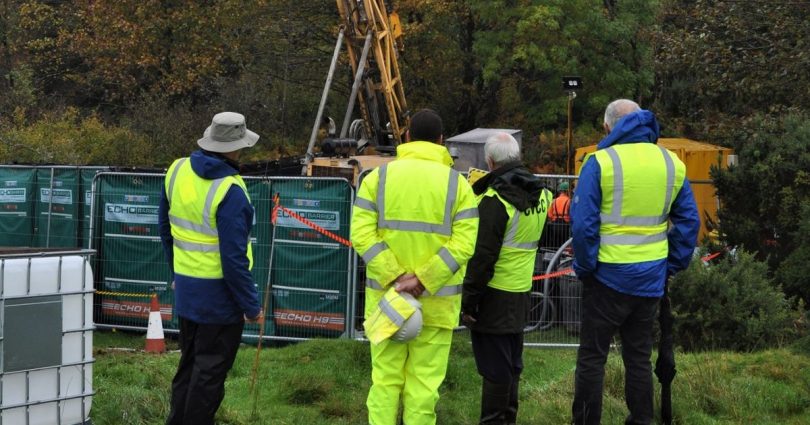 The company prospecting for valuable and rare metals in Kirkcudbrightshire has announced its first survey findings.

The firm surveyed the former lead mining area close to Kirroughtree visitor centre for a year up to this spring.

Now it wants to confirm whether mineral seams are extensive enough to warrant possible exploitation by deep mining.

Walkabout Resources’ chief executive Andrew Cunningham said: “The completion of our maiden scout drilling programme over the Blackcraig prospect marks the first exploration drilling programme in the region since the discovery of the mineralisation more than 250 years ago.

“As expected, the results confirm the continuation of high-grade mineralisation beneath the old underground mine workings and are invaluable to our understanding on the controls and type of mineralisation in the area.

“The company’s large footprint in what is seen as an unexplored and potentially high-grade mineralised region further supports the need for a modern, systematic and well-planned approach to mineral exploration in Scotland and more broadly, the security of supply of critical metals in the United Kingdom.”

Top assay findings include a bore sample showing 12 per cent zinc – a rich deposit of the metal – and another containing almost five per cent lead.

The report, from Walkabout UK subsidiary JDH Exploration, states: “The assay results do not provide sufficient data to confirm whether a mineral deposit is present in sufficient grade or size that could be economically mined at Blackcraig.

“Exploration is a lengthy process composed of many steps.

“We are still some way off knowing if a mineral deposit is present at Blackcraig and, if so, whether it is viable to be mined.

“Therefore, further low impact exploration work is necessary to build a better understanding of the mineralisation occurrences in the area.”

Silver was found only in trace amounts at Blackcraig – but gold could be present in significant quantities at Glenhead near Loch Trool.

The report adds: “The St John’s Town of Dalry licence area has produced soil sampling results that are encouraging in the Glenhead area.

“Although there is no confirmed timetable yet, it is likely that in the future we will seek to complete a similar initial drilling programme to that completed on Blackcraig.”

The results were announced two days ahead of today’s drop in sessions at Newton Stewart to update the public on recent developments.

The sessions in the McMillan Hall run from 2pm-4pm and 6pm-8pm.

Galloway Against Mining will be sending representatives to question the company at the event.

The action group held a demonstration at the last public meeting at the venue.

Spokesperson Kenny Campbell said: “The results from Blackcraig and statements from JDH Exploration and Walkabout Resources are, whilst interesting, only serving to tell the communities of Galloway that the threat of the blight of mining is continuing and real.

“However, if they’re not going away neither are we.”