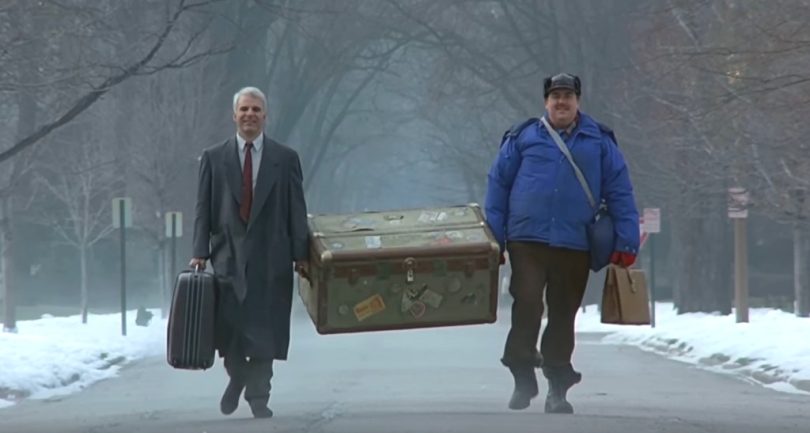 Over the holidays, a new 4K disc of Planes, Trains and Automobiles was released. The disc got mixed reviews on the basis of picture quality – the biggest complaint seems to be too much digital noise reduction, which takes away the grainy, film-like look a lot of people like; also, strangely, the audio track has the two rear speakers switched – but the real draw to this disc is the discovery of around 70 minutes of deleted scenes that were thought lost.

There have long been rumors of a longer version of Planes, Trains and Automobiles. There just had to be based on the fact that, clocking in at 92 minutes, it’s a very short movie. That’s in the length of, “hey, what went wrong here?” Yet there was really no evidence of this longer version other than some peculiar character traits we’ll get into in a bit that kind of, sort of don’t make total sense. Having now watched the deleted scenes, it’s kind of a revelation on how much these change the story of Planes Trains and Automobiles. It becomes not just a story about Neil (Steve Martin) trying to get home to his family, who got stuck with an often annoying companion, Del (John Candy) … but it changes the whole dynamic into a movie about Neil’s wife assuming Del is a woman and her plotting to leave him for having an affair. The ending of Planes, Trains and Automobiles is one of the most beloved endings of any holiday movie, but with the deleted scenes it becomes something else entirely.

But before we get to that, most of the deleted scenes are just extended scenes of John Candy riffing, seemingly just trying to make Steve Martin break character, though he never does in any of the stuff we see. These don’t really change the dynamic of the movie much except make Del a little bit more annoying. My favorite of these, which I wish were in the final movie, is Neil and Del on the plane as Del tells Neil all about the shower curtain business. The best exchange is when Del is telling Neil about the time he landed the U.S. Navy contract and asks Neil to guess how many shower curtain rings Del sold to the Navy. Neil wants no part of this but, finally broken, guesses, “a thousand?” Del fires back, “Try 83 million.” Which is such a ridiculous number you can physically see Steve Martin using all his willpower not to laugh. (What are there, 10 shower curtain rings on each shower curtain? The thought of the U.S. Navy having 8.3 million showers that need curtains is really funny.)

Also of note, there’s a cut scene in the Wichita motel of Del stiffing the pizza delivery guy on a tip (using Neil’s money), who winds up being the thief who comes back and steals their money in the middle of the night. So this wasn’t initially intended to be a random crime, this was supposed to be revenge for Del being cheap. I say “of note” because it’s certainly interesting, but doesn’t change the entire movie except for painting Del in a bit of a bad light.

But there is an excised plot point that does change the whole movie. And that’s Neil’s wife, Susan (Laila Robins), believing Neil is having an affair with a woman named Del. In fact, there’s an entire cut scene between Susan and her mother where she lays all of this out and goes as far to say she’s leaving Neil. She is not buying Neil’s story that Del is just some “random annoying guy” he’s spending all his time with. Though it’s not clear if Neil realizes how serious the situation is with his wife. This is why Neil doesn’t simply put Del on the phone to clear all of this up. Like a good Midwesterner (I speak from experience), Susan Page just passive-aggressively makes a couple offhand comments to Neil about the situation, then bottles up all her anger inside so it can finally come out in one grand overreaction.

So here is how all this drastically changes the ending of Planes, Trains and Automobiles. And I find this truly fascinating. When Neil is on the L and it starts to hit him that Del doesn’t have anywhere to go, Neil doesn’t realize there’s an ambush waiting for him at home. Susan has literally told her mother she’s leaving Neil. So if Neil shows up at home by himself, all he has is his stories about Del, but no physical proof. But Neil doesn’t know this ambush is waiting for him. So when Neil goes back and invites Del to Thanksgiving dinner, a true act of unselfish kindness, Neil is, unknowingly, also saving his own marriage. So that’s why the end scene plays out a little fraught. And that’s why Susan introducing herself to Del is played so dramatically. In that instance she realizes Neil has been telling the truth about Del and Del isn’t a woman Neil has been having an affair with.

So the way it plays out in the actual film, Neil displays an act of kindness and Del benefits. In the original imagining, Neil’s act of kindness winds up saving his marriage. Neil and Del didn’t even exchange numbers when they parted ways. If Neil didn’t go back, Neil has no way of finding Del to vouch for his story. If Neil isn’t kind to Del at the end, Susan is going to either file for divorce or, at the very least, be skeptical of Neil for the rest of their lives. And look, the way the movie wound up coming out is the better ending. It’s nice that Neil just does a kind thing for no benefit. And again, in the cut version Neil thinks he’s doing a kind thing for no benefit, but the reality is he is befitting and that would take away a little bit from how nice that ending scene winds up being. But, again, it’s fascinating to now know for sure that that ending at one point did exist.