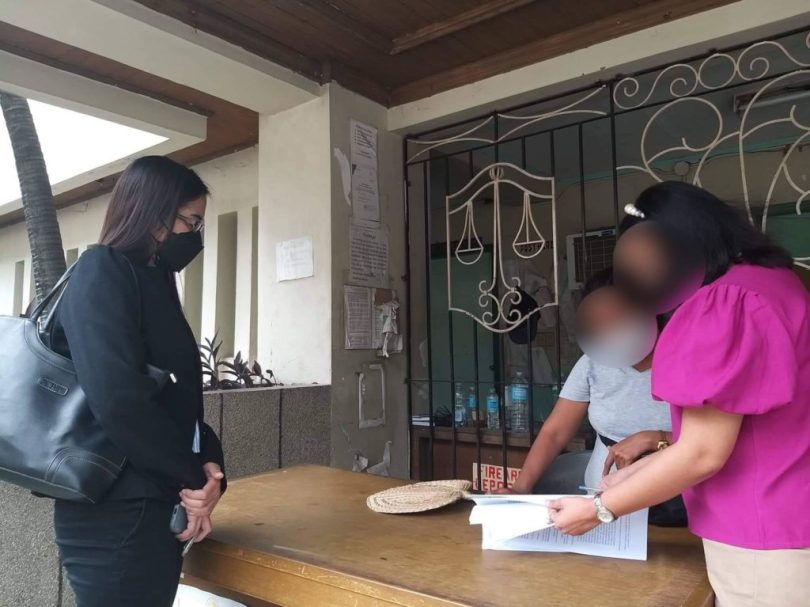 The family of a female, teenage model has sought the help of Children’s Legal Bureau (CLB), a non-profit, anti-child trafficking group in Cebu, in filing Anti-Human Trafficking charges before the Mandaue City Prosecutor’s Office on June 29 against her manager and an events organizer in Cebu.

CEBU CITY, Philippines – The owner of a popular modeling agency and an events organizer, both Cebu-based, are now in hot waters.

They are currently facing complaints for allegedly violating the Anti-Human Trafficking Law after a teenage model accused them of exploiting her.

The victim’s family sought the help of the Children’s Legal Bureau (CLB), a non-profit, anti-child trafficking group in Cebu, in filing the charges before the Mandaue City Prosecutor’s Office on June 29, 2022.

“They are charged for violating Section 4 (a) of Republic Act 10364 or the Expanded Anti-Trafficking in Persons Act which is “to recruit, obtain, hire, provide, offer, transport, transfer, maintain, harbor, or receive a person by any means, including those done under the pretext of domestic or overseas employment or training or apprenticeship, for the purpose of prostitution, pornography, or sexual exploitation,” CLB said in a statement.

CDN Digital has decided not to disclose the identities of the victim, her family, and the accused of the former’s protection.

CLB reported that the victim’s manager misled her to audition for a supposed ‘bikini-open’ event on September 13, 2021 in a hotel in Mandaue City, only to find out she was being set up to do lewd acts for an events organizer.

“(The victim) stated in her affidavit-complaint against the accused (redacted) that it was her manager who told her to go to the hotel for the screening, without telling her with whom she was meeting,” CLB wrote.

The events organizer in question has attempted to get in touch with the victim even before the apparent ‘bikini-open’ photoshoot took place. The victim, however, turned down his multiple requests, the statement added.

Despite her refusals, the events organizer brought her to a motel in Mandaue City where she was said to be raped. The event organizer even attempted to arrange her to meet other ‘sugar daddies’, the group added.

The events organizer is also facing a separate complaint for rape filed by the same victim, CLB said.

“She was not also informed that she was the only one to be screened in the supposed photoshoot. According to (redacted) her affidavit, she wanted to back out, but was unable to do so when (the events organizer) set her up for a dinner. She was then led into his car and brought to (a motel) in Tipolo, where she was raped,” said CLB.

Lawyer Kristine Marciana Laplana, legal officer of CLB who also serves as the victim’s assisting counsel, expressed confidence that the accused will be held accountable by the authorities.

”There is sufficient cause for us to believe that there was connivance between (the modelling agency owner) and (the events organizer). All the circumstances point to the fact that she was led to the lion’s den. She was in such situation where she can no longer resist an impending abuse,” said Laplana.

Warning to other modeling agencies

In the meantime, CLB spokesperson, lawyer Noemi Truya-Abarientos, said this development would serve as a warning to stakeholders involved in the modeling industry who are planning to take advantage of their talents.

“This is not the first time that we learned that women and children are being lured into the glamour of the modelling and pageant world, only to be sexually abused and trafficked,” said Abarientos.

“We are glad that our client found the courage to pursue this case against her manager and the events organizer.

We are hoping that her coming out will lead to a review of some practices in the modeling industry that make women and children open preys to sexual predators,” she added.

CLB is assisting the victim under its program Strength-Counter-Trafficking in Persons Project with the United States Agency for International Development (USAID) and the Partnership for Development Assistance (PDAP).

Disclaimer: The comments uploaded on this site do not necessarily represent or reflect the views of management and owner of Cebudailynews. We reserve the right to exclude comments that we deem to be inconsistent with our editorial standards.