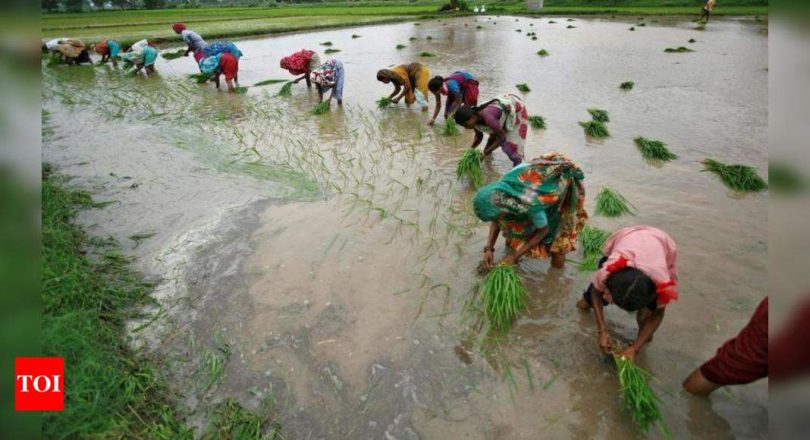 As sowing is in process in other parts of the country, there is a cause for worry as Maharashtra is highly deficit by 41%

Nagpur: The Southwest Monsoon this year has started on an erratic note, and is presently lagging behind schedule. Experts fear that the monsoon deficiency is going to further increase pressure on food prices, which are already high.
At a webinar organized by Delhi-based climate communications initiative Climate Trends on Friday, experts raised concern over skewed rainfall distribution, which is likely to have an impact on the sowing process. According to them, the stress would be more over Northwest India, which has been dealing with prolonged dry spells. “Situation is not very pleasant in parts of East and Central India, as there is a high deficit. Further, with high humidity, the threat of pest diseases also looms large,” they said.
India has been witnessing extreme weather conditions of rainfall deficit in most parts of the country and simultaneously witnessing massive flooding in Northeast India. This has brought focus back on the high monsoon rainfall variability, which has been a cause of concern for the country, which employs 50% of its workforce in rain-fed dependent agriculture.
Experts say, the number of dry days has increased during the four-month long season, while rainy days have reduced. However, extreme weather events have increased. Although, in the last three years (2019-2021), India recorded normal to above normal rainfall, but variability in dispersal of monsoon rains has been ever high.
With climate change here to stay, scientists and experts have called for new agricultural practices and technologies which are climate resilient. “Easterly winds, which are responsible for bridging monsoon rains, have been completely absent so far in June. We are witnessing southwesterly winds, which have taken rains from Odisha, West Bengal and Jharkhand to Northeast India. We are not expecting easterly winds for the next 4-5 days as well, which is a cause of worry for the northern region,” said RK Jenamani, senior scientist, National Weather Forecast Division, India Meteorological Department (IMD).
The Southwest Monsoon is a key influencer in the country’s economy, especially for the 18% Gross Domestic Product (GDP) share from agriculture, along with allied industries. This period coincides with the sowing season for India’s main cropping season named Kharif, for rice cultivation. Over 40% of the sown area of India is still dependent on rain-fed irrigation.
Experts also raised concern on this. “Kharif sowing has been affected because of the prolonged dry spell that still continues, while the northeast region is bearing the brunt of extreme heavy rainfall. Meanwhile, for the rest of the country sowing is in process. However, there is a cause for worry as Maharashtra is highly deficit by 41%,” said Devinder Sharma, agriculture trade policy analyst, adding that there is a need for climate smart technology, which should be in sync with agriculture, which accounts for one-third of greenhouse gas emissions.
A 1% change in monsoon rainfall will result in 0.34% change in India’s agriculture-driven GDP that year, said Abinash Mohanty, programme lead, risks and adaptation, Council for Energy Environment and Water said. “A normal monsoon can increase GDP from the transport, storage, trade and communication sector by 1% and 3% in the agri-dominated states. Our electricity generation can decrease by 13% in case of weakened monsoon. These numbers are a concern but we need to build resilience through systems, technology and financial innovations. System innovations can help improve the state’s capacity to predict, prepare and respond to extreme events,” added Mohanty.
BOX