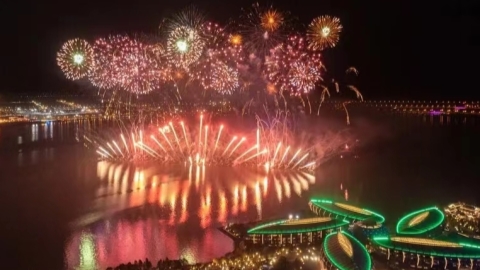 Today marked the third anniversary of Lingang turned into the special area of the China (Shanghai) Pilot Free Trade Zone, and the city released a slew of new policies and targets to give more impetus to the area that is crowned as a growth powerhouse.

In the next stage, the area will be promoted to a new level of growth featuring higher visions, and more freedom in reform will be allowed, according to a press briefing on Saturday celebrating the area’s third anniversary.

Lingang will focus more on institutional innovation, and make higher-level opening-up the biggest dividend for the development of the special area.

Focusing on the “five freedoms and one facilitation,” or more freedom in trade, investment, capital, transport and employment, as well as more facilitation in information sharing, Lingang will stress more on testing practices for further opening-up. It will make greater strides in opening up several key areas such as cross-border finance, offshore trade, and the digital economy.

By the end of the 14th Five-Year Plan period (2021-2025), the institutional reform will be completed, and the global resources allocation capacity will be significantly enhanced.

The Yangshan Special Comprehensive Bonded Area will be built into a free trade park with higher international recognition and stronger competitiveness.

At the same time, more efforts will be made to build world-class industrial clusters and make advanced manufacturing industry the fundamental cornerstone of the development of Lingang.

By 2025, the total industrial output of companies with annual income exceeding 20 million yuan (US$2.93 million) will reach 500 billion yuan, with an average annual growth rate of 25 percent.

Three 100-billion-yuan industrial clusters of intelligent new-energy vehicles, high-end equipment and integrated circuits will be formed. There will be 500 artificial intelligence enterprises, with a total industrial scale of more than 50 billion yuan.

Wang Wenjia, director of Tesla R&D engineering in Asia Pacific Region, told Shanghai Daily: “The Shanghai Gigafactory in Lingang is the most typical example of China’s reform and opening-up and Shanghai’s openness and inclusiveness.

“Tesla has verified the feasibility, rationality and practicability of foreign shares in the automobile manufacturing industry and the number of joint ventures of vehicle manufacturers with its distinctive new-energy industry chain driving effect and huge economic spillover effect.”

Lingang will focus more on the cultivation of new business forms and new models to vigorously develop new bonded businesses such as bonded R&D, bonded manufacturing and bonded maintenance.

“It is a hub for the world,” said Peter Foo, president and CEO of UOB (China), which will open a branch in Lingang next month.

Foo suggested that in the case of dual circulation, the fund management of foreign banks and the management of some offshore and cross-border fund pools will promote wider use of the Chinese yuan.

“The pricing of raw materials and goods for buyers and sellers must be opened through policies such as Lingang unveiled, which can also better integrate with the domestic market in the field of green finance,” he added.

By 2025, the total operating income of Yangshan Special Comprehensive Bonded Area will reach 1 trillion yuan, and the total import and export will reach 220 billion yuan.