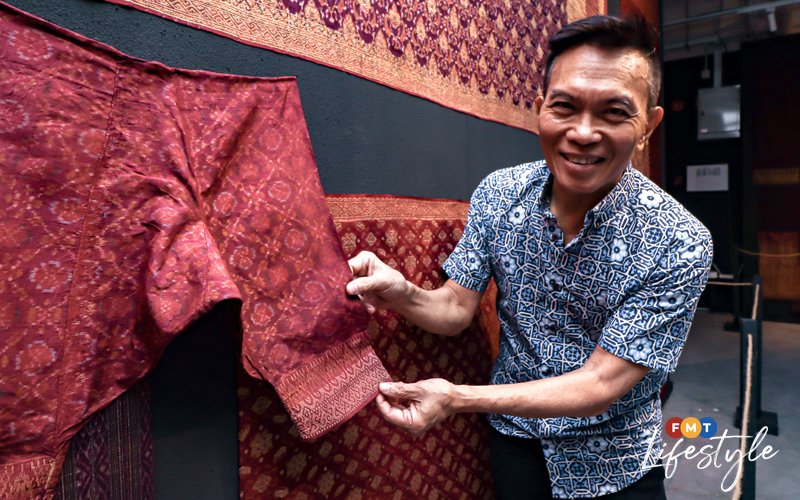 KUALA LUMPUR: Stepping into the exhibition area of the “Splendours of Malay World Textiles” is a surreal experience. Along with the strains of soft traditional Malay music, the 700 exhibits of textiles on display come to life, mesmerising in their intricacy, beauty and rich heritage.

The exhibits are part of the private collection of John Ang, a Chinese-American who moved to Malaysia in 2018.

Catching up with him recently, FMT asked Ang what compelled him to painstakingly collect these textiles over the years and then self-fund the exhibition.

Ang said his love for textiles is in his genes, and related how his great-great grandfather, Tan Hiok Nee, ran a roaring textile trade in Telok Blangah in Singapore.

“My great great grandfather befriended Sultan Abu Bakar, who also had a love for textiles. The sultan eventually made him the ‘Major China’ of Johor,” Ang added.

To this day, there are textile shops in Johor Bahru along Jalan Tan Hiok Nee, which was named after him.

Ang said his interest in Malay textiles was piqued when he was living in Taipei. There, he had a gallery specialising in Asian antiques, ceramics, furniture, jewellery as well as textiles.

In 2014, Ang acquired his first piece of “limar”, a Malay textile that bears many similarities to Cambodian textiles.

“I couldn’t find many books about it, so I started travelling to discover more,” he said.

One of the places he travelled to was Chau Doc in Vietnam where he acquired the “ikat loseng”. “It is from a small village about six hours from Ho Chi Minh, where everybody speaks the Malay language,” he recalled.

He also obtained more “limar” and “batik” from Pattani in South Thailand where Malay communities existed. He said his excitement grew the more he discovered the many similarities in the structure and design of the textiles between these places.

“The Malay world is so vast, and despite being divided by oceans, the Malays were somehow well connected through maritime technology. I discovered the power of unity,” he shared, adding that the exhibition features textures from Malay communities across Southeast Asia, instead of a specific country.

“What drew me to Malay textiles is its undiscovered beauty. For example, Americans are familiar with Chinese embroidery and the qipao, but they don’t know much about Malay textiles, apart from batik.”

By January 2022, Ang had amassed some 5,000 pieces of textiles. He picked 700 for his current exhibition – with the earliest piece dating back to the 17th century.

The two notable exhibits he said were the “limar berayat” because of the Islamic calligraphy woven into the cloth as well as a century-old “telepuk” with beautiful gold impressions.

For Ang, his textile collection is a labour of love as he has to exercise great care when storing and preserving these precious fabrics.

“I need to tell people about the history of the Malays through the textiles. As I collect these items, I am also collecting the stories behind the pieces that tell people who they are.”

He said it was important to show Malaysians that they had many historical “assets”.

“Most people think that Malay textiles are only limited to songket and batik, but there are actually more,” he said, adding that the Malays were a creative and hardworking group of people.

Tickets for the exhibition that runs until Oct 30, can be purchased here. Learn more on Facebook and Instagram.

Opening hours:
10.30am to 6.30pm daily
Closed every Monday from Aug 8 onwards