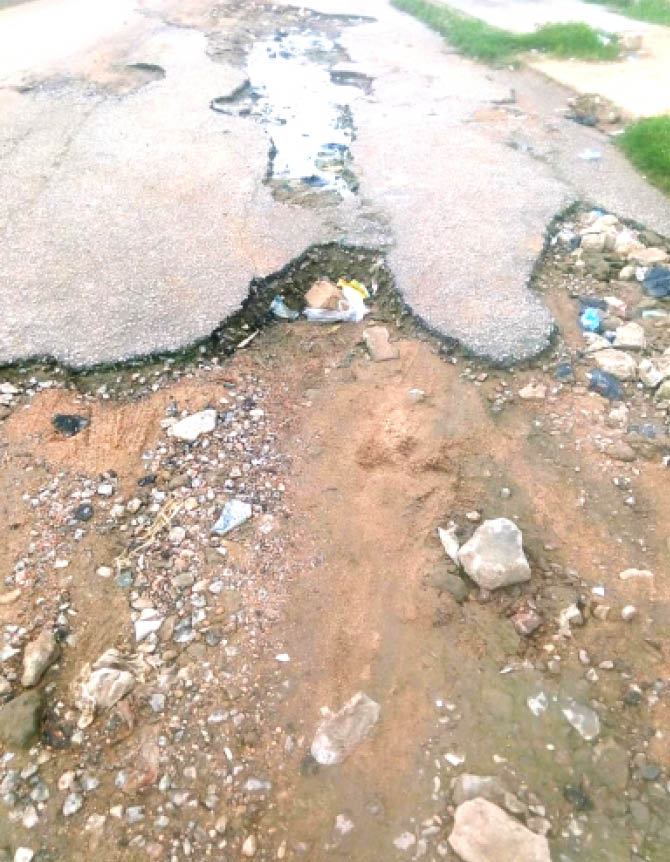 Driving within the Kano metropolis comes with some challenges. The wet season has heightened the plights of motorists as they contend with deplorable roads. While manoeuvring around the terrible portions the motorists also put pedestrians at risk. Some motorists and pedestrians in this report share their surviving strategies while the government also revealed its plan to ensure better roads. Daily Trust Saturday reports.

With the spate of insecurity in the North East and North West geopolitical zones, the relatively peaceful Kano has continued to accommodate multitude of people who troop into the commercial nerve centre of northern Nigeria to start life anew. This surge in the number of residents and motorists has, in recent times, increased the frequency of traffic gridlocks in the city, said to have been worsened by the deplorable state of the roads.

A Kano resident, Huzaifa Sani Ilyas, narrated how the potholes in different parts of the city damaged his vehicle, which culminated in draining his finances.

“It is terrible. My mudguards are down, my tyres are dead, and my car is always in a mess because of terrible roads. When I walk, I would walk by the edge, highly disturbed,” he said.

Court Road, which is the seat of the Federal High Court, the National Industrial Court, as well as many other business premises, are the worst affected, with flood taking over most parts of the roads and creating craters due to years of lack of maintenance.

As soon as one veers off the busy Zoo Road, different sizes of potholes and bumps become the hurdles one would continuously contend with. As one gets to the Aminu Kano Teaching Hospital (AKTH) roundabout to the school of nursing and Karkasara Street, one’s experience with these potholes gets worse. A complete lane at the Tudun Fulani-Darmanawa axis is no longer pliable as it has become a mini wetland that holds stagnant water whenever it rains.

A resident who simply identified himself as Mr Chido said, “In the rainy season, the road is not good, right from Court Road through Karkasara, till ‘Yan Katako. It is very terrible, to say the least. You can see how bad the road is; half of it is not motorable. Sometimes all vehicles converge on the other side of the road.  I think the government should do something about it.”

Another resident along Court Road, Musa Bashir said, “This road is too bad. If it can’t be repaired, let us have some trucks of sand so that we can fix the potholes ourselves, even if it is temporarily.”

A similar bitter experience is obtainable in Dabai and Dandinshe communities. Describing the situation there, some residents said, “When it rains here, parts of our roads are flooded due to degeneration and potholes. Sometimes flowing water on the road can reach your knee. It is a complete disaster. We have been neglected. Just pray you don’t follow this road with a pregnant woman in your vehicle, she may have premature delivery.”

The story of neglect and terrible roads is also echoed along Auzinawa, up to Rimin Zakara. Residents and commuters told Daily Trust Saturday that their horrifying experiences and subsequent damage to their vehicles made them resort to sand-filling more dangerous areas.

The experience is the same on Brigade and Rimin Kebe roads, Sharada  Kwanar Kasuwa, Sabontiti in Doarayi, along Panshekara Road to Kofar Famfo. Hardly would a vehicle move steadily for minutes without jamming into chains of potholes.

When contacted on the situation, the commissioner for works in the state, who doubles as the supervising managing director of the Kano Road Maintenance Agency (KARMA), Idris Wada Saleh, said government was trying to repair the affected roads.

A top management staff of the agency, however, admitted that Kano metropolitan roads are in terrible conditions and in need of resuscitation. Although not authorised to speak to the press, he said the agency was working tirelessly to compile a list of the most affected roads to be submitted to the state government for necessary action.

“I have a record of 30 roads, and our members of staff are in the field to gather information on the condition of the roads, which will be conveyed to the governor for necessary action. He will decide the ones to be repaired first.

“The 30 are the first; we are still working. We were asked to gather as many roads that need rehabilitation/repairs as possible.

“Because of the urgency of this assignment, reports are sent from the fields. Some members of staff were in office as late as 9:30pm yesterday (Tuesday) because of this work, and today (Wednesday), they will close late because they want to gather the necessary information and forward to it,” he explained.

He said the agency had earlier submitted a list of township roads that needed to be rehabilitated but it was overtaken by other projects, which gave them the opportunity to upgrade the ongoing list to accommodate roads that got damaged recently.

He said, “We earlier submitted our list but there was no response, so we have to do it now because the potholes have increased.

“A pothole that was one square meter before the rainy season may now be two or three square meters. Some roads are old and worn out and need to be reconstructed. So, we will update the list to add the new ones.

“The media should also sensitise people because on many occasions they contribute to the destruction of the roads by blocking the drainages. People dump refuse inside drainages. Some of them can’t even repair or clear the frontage of their shops.  Some people also dump refuse in the waterways,” he added.

Concerning the date for the commencement of the rehabilitation, he said, “I can’t tell you precisely when work would commence because I am not the one to approve it. Our work is to compile the list and send.”