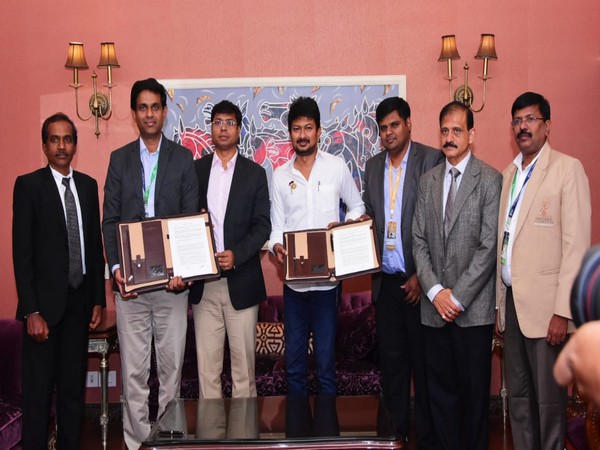 Chennai (Tamil Nadu) [India], January 21 (ANI): In a major move that is designed to benefit the sporting fraternity of the states of Tamil Nadu and Odisha, an MoU has been signed between the two states.
The Sports Department of Odisha and the Sports Development Authority of Tamil Nadu have come together to sign an MoU in the presence of the Minister of Youth Welfare and Sports Development, Government of Tamil Nadu and senior officials of the two governments. The President of Hockey India and legendary ex-hockey player Dilip Tirkey was also present on the occasion.
The mutually beneficial MoU, which is going to go a long way in helping the sportspersons of the two States will pave the way for sharing of sporting infrastructure between the two states, as per a press release from the Minister of Youth Welfare and Sports of Tamil Nadu.

On the occasion, Udhayanidhi Stalin, Minister for Youth Welfare and Sports Development, Tamil Nadu said, “TN government will make all possible efforts to improve the quality of sports in the State. This is one such effort in that direction.”
The MoU is designed to facilitate the exchange of young talents, coaches, sportspersons, sports administrators and sports scientists between the two states.
The agencies involved from the two states will mutually provide inputs aimed at creating a high level of training facilities, sports academies, centres of excellence, sports complexes and other such state-of-the-art sporting infrastructure where world-class sportsmen would be trained. The contract will also help the two states in organising international sporting events.
It will also facilitate sharing of best practices and experiences of the two states in the field of sports including facilities for para-athletes. (ANI)