The demand for flexible office space has hit a high as more companies, including startups, opt for co-working after the COVID-19 pandemic, according to the latest data from real estate services company ANAROCK. The report also noted that businesses in the Mumbai Metropolitan Region (MMR) paid the highest office rents.

“Backed by rising office space demand, average monthly office rentals are also seen to be rising across the top cities,” the report said.

In MMR, the average office rentals in the first half of 2022 were the highest among the top seven cities at Rs 128 per square foot, followed by Bengaluru and National Capital Region (NCR) at Rs 81 and Rs 80 per sq. ft., respectively. Kolkata has the lowest at Rs 53 per sq. ft.

NCR and Hyderabad each saw a 5 percent rise in average monthly office rentals from January to June compared to the same period in 2021, while tech hubs Bengaluru and Pune each saw a 4 percent yearly rise, the report said. MMR, Chennai, and Kolkata witnessed a 2 percent jump each, it added.

According to ANAROCK data, out of a net absorption of approximately 20.8 million sq. ft. across the top seven cities, the share of co-working spaces stood at 20 percent, up from just 6 percent of net office absorption of approx. 9.33 mn sq. ft in the first half of 2022.

However, in contrast to the first half of 2021, the share of IT/ITeS sector, which is India’s leading office demand driver, has declined from 49 percent to 36 percent this year. “This decline is largely because many IT companies are now also preferring flexible spaces to regular office spaces,” the report claims. 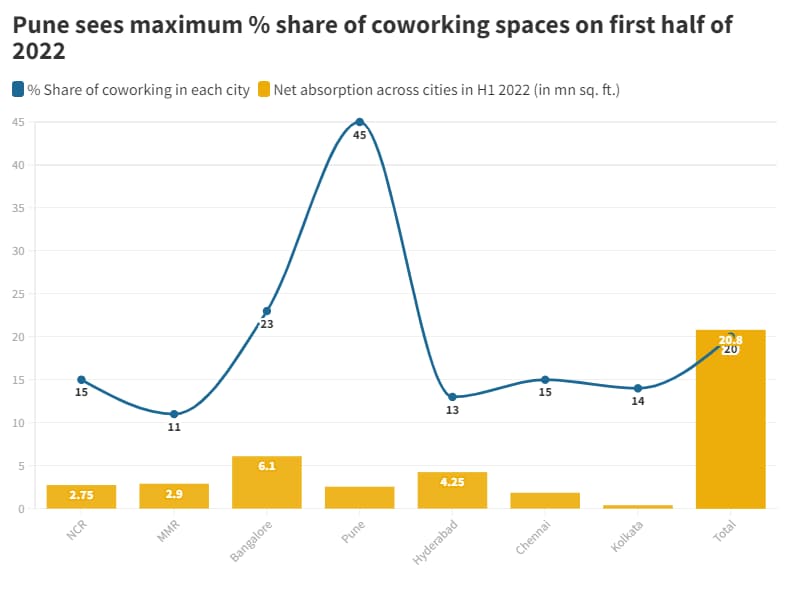 In a statement shared with CNBCTV18.com, Anuj Puri, Chairman of ANAROCK Group, said, “A major factor driving demand is that these spaces are not concentrated in just the city centres or major employment hubs; they’re spread across different areas, including the housing-intense suburbs.”

He added that coworking spaces are now operating out of malls and hotels across cities, while many large office parks also housing coworking spaces. He said that this helps companies to remain closer to their employees and offers them flexibility.

Explaining the cost advantage to firms said that with flexible office spaces, companies can plug-and-play at the same cost rather than wrestling with office layouts and fit-outs. “The lock-in period for taking up a regular office space is anywhere between 3-4 years. All these factors have also helped boost the demand for co-working spaces,” he said.