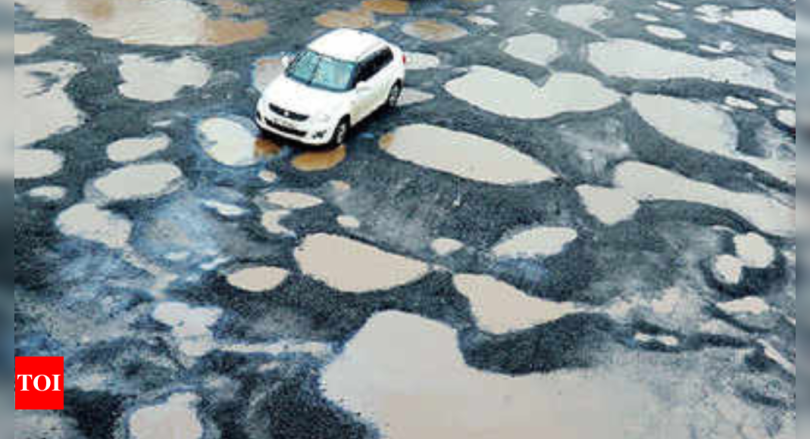 Image used for representational purpose only

MUMBAI: As the Ganesh festival approaches, the Brihanmumbai Municipal Corporation (BMC) issued guidelines warning puja organisers of a Rs 2000 fine for each pothole if it is caused while erecting a mandap.
A team of the BMC officials will be on the move to check such cases at regular intervals.
However, some Ganesh mandals said that they had taken initiative to make sure the roads around their area aren’t dug up for the festival.
Year after year following every heavy spell, motorists in the city complain about potholes on Mumbai roads.
This year potholes on Mumbai roads, especially Western Express Highway, Link Road from Dahisar onwards and Jogeshwari Vikhroli Link Road have left motorists hassled.
While most city roads are under the BMC but some arterial roads like the Western Express Highway (WEH), the Eastern Express Highway (EEH), Jogeshwari Vikhroli Link Road (JVLR) and the Link Road from Dahisar to Andheri are being maintained by the MMRDA as Mumbai Metro works are ongoing.
Officials said that along the JVLR stretch works on Metro line 6 were ongoing while Metro line 2A works are ongoing along the Link Road.
In the past five months, the BMC has attended to 25,721 pothole-related complaints from citizens.
Deputy commissioner (infrastructure) Ulhas Mahale, said the department attended to pothole related complaints on the roads that BMC maintains priority.
“During Ganpati festival as well, if we get complaints about any mandal having caused potholes on the road while erecting a pandal, a penalty will be levied upon them,” he said.
Organisers of the 56-year-old Tejukaya Ganeshotsav in Lalbaug area said that they would ensure potholes-free roads.
“We take all precaution and in case of a pothole caused by us, we ensure that the same is filled and taken as a matter of community responsibility. The BMC ward office team who comes for inspection on the 11th day after the idol is taken for immersion, also checks the same from their side. In 2019, there were no fines on us as well for causing potholes,” said spokesman Rahul Dhumne.