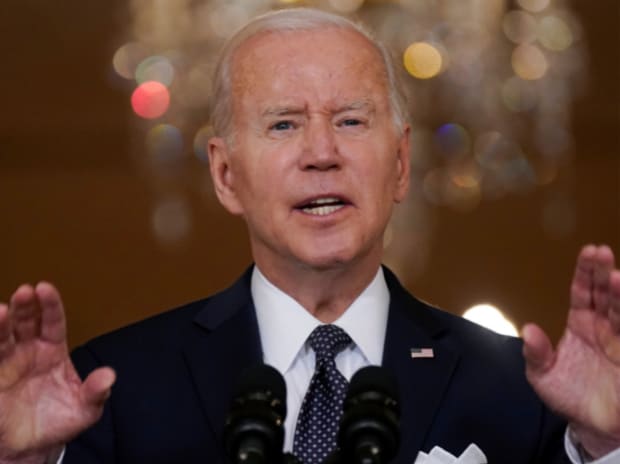 In a pair of fundraisers here on Friday, President Joe Biden urged Democratic donors to send him reinforcements on Capitol Hill to keep Republicans out of power and help dislodge his agenda from the current gridlock.


We need two more senators, Biden said at the second fundraiser, a reference to Sens. Kyrsten Sinema of Arizona and Joe Manchin of West Virginia, two members of the Democratic caucus that he’s struggled to win over.


Without naming either of them, he said they’re slowing up what we’re able to do.


It will be difficult for Democrats to pick up any seats in this year’s midterm elections, and Republicans are poised to retake control of Congress.


But Biden described himself as an optimist as he urged donors to continue opening their wallets to support his party. Each fundraiser raised about USD 2.5 million, according to a Democratic National Committee official.


The first was intimate, with a couple dozen attendees. It was held on the back patio of the home of Andrew Hauptman, a private investor. Jeffrey Katzenberg, the Hollywood producer, was also there.


The second fundraiser was at the Muholland Drive estate of Haim Saban, an entertainment mogul. Scores of donors sat under a tent that was pitched on the property’s tennis court.


During the fundraiser there, Biden touted the economic progress under his watch but conceded that prices will likely continue to rise.


He mocked the idea that teachers should be armed, noting how long it takes to train a soldier to use a firearm.


Pantomiming a pistol with his fingers, he said, It’s not easy to pick up a rifle or a gun and blow somebody’s brains out.


At the first fundraiser, first lady Jill Biden spoke before the president.


He is working as hard as he can,” she said. “We are moving in the right direction.


Biden spoke about rallying allies to support Ukraine, recalling how some people doubted US intelligence about Russia’s pending invasion.


Zelenskyy didn’t want to hear it, he said in a reference to Ukrainian President Volodymyr Zelenskyy.


Biden also appeared raw over some of the media coverage of the Summit of the Americas, which was held this week in Los Angeles. Many stories focused on how some Latin American leaders, notably the Mexican president, boycotted the summit, and others who attended gave speeches criticizing how the US handled the event.


Speaking of the press, Biden said, I wish they would go back and interview all the heads of state, insisting that there was overwhelming, overwhelming support for working together.