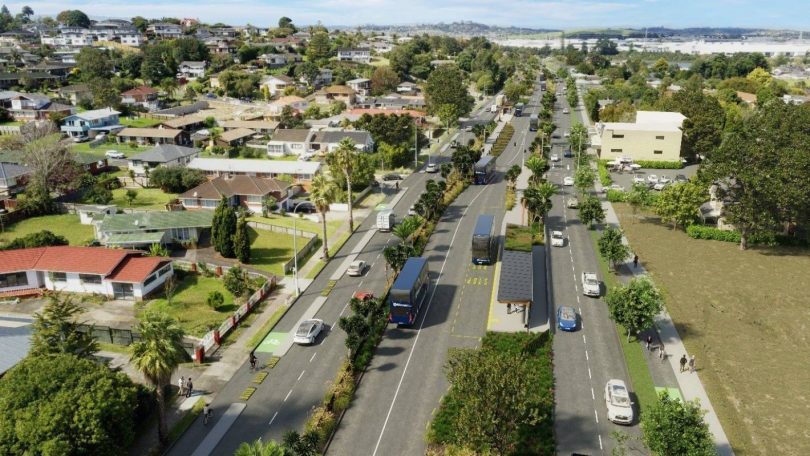 Auckland’s multi-billion dollar transport challenges are to be dealt with under a single joined-up approach unveiled by the government and council, starting with a $200 million boost for the Eastern Busway.

The joined-up plan will span light rail, a future shift of the city’s port, a new harbour crossing and other work, signalling an end to public jousting project-by-project, and merging separate council and government funding and strategy plans.

“The agreed joined-up plan will require clear decisions and timelines to be made about the future use of Auckland’s publicly owned waterfront land, currently being used by Ports of Auckland,” mayor Wayne Brown and Transport Minister Michael Wood said in a statement.

The Eastern Busway is the biggest public transport upgrade for Auckland’s eastern suburbs and had been slowed in part by big shifting funding commitments.

By 2028 it is expected to carry four times the number of people compared to before the Covid-19 pandemic, reaching 14,000 passengers a day.

The long-sought government funding boost for the busway will come from money previously earmarked for the now-abandoned cycling and walking bridge across the Waitematā Harbour.

As significant as that project funding is, the council and government agreement to be more co-ordinated in dealing with the city’s other big-ticket projects may be a bigger step forward.

While the fledgling light rail plan, a likely tunnel under the Waitematā, the well-advanced City Rail Link and even the future of the port have obvious connections, each has advanced, or not, in isolation.

“This work will be supported by the Government’s draft New Zealand freight and supply chain strategy to be published by June next year, which will inform investment decisions by central and local government and the private sector,” said Michael Wood, the transport minister.

“The government and council have committed to work together to advance our priorities, provide certainty and deliver progress for Auckland,” said mayor Wayne Brown.

Work on each of the component projects continues, such as the government’s technical report on the feasibility of the Manukau Harbour as a future location for the port.

Moving the port sooner rather than later is a pet project for Brown, who has favoured relocating operations to Northport at Marsden Point, with the vehicle import trade to move early.

A port move, and even a shorter-term shift of container movements from truck to rail, will require further Crown investment in the rail system.

The co-ordination deal signals a possible defusing of project-by-project differences being aired, with Brown a light rail sceptic.

There is no suggestion any project’s pathway will change in the near future, and the light rail design work takes into account how it would connect to future cross-harbour or western extensions.

The joint statement is largely silent on a more immediate question, the latest cost-estimate and completion date for the $4.4 billion City Rail Link, with the mayor and minister having been due to receive an update on Friday afternoon.

The long-awaited update, expected to reflect the impact of inflation, Covid-19 delays, and project changes, had been promised before Christmas, and the silence may mean negotiations with the project’s builder, have not been completed.

There is reference to “maximising the return” from the project, which may be agreement on how funding could come from “taxing” the uplift in property value around stations.