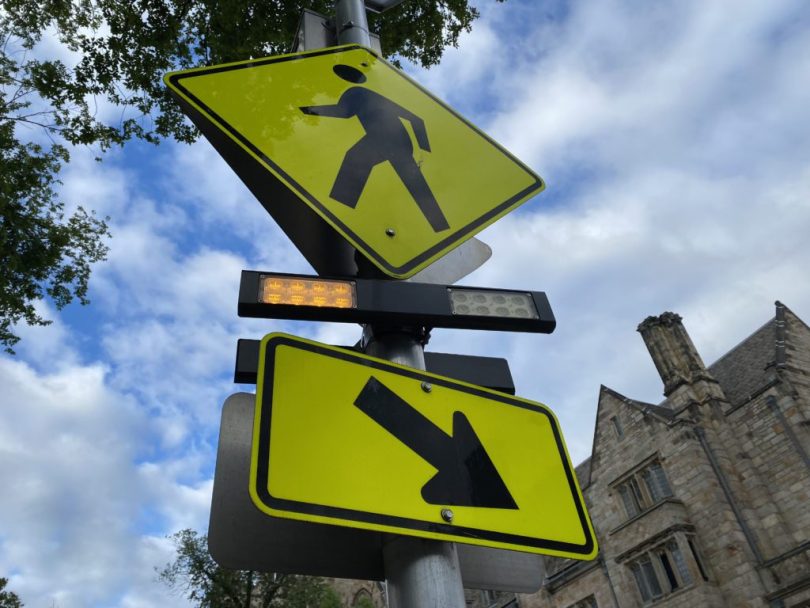 The citywide active transportation plan, which was approved by the Board of Alders on Tuesday, will support future developments and grant applications.

Just over a quarter of New Haven residents travel to work by foot, bicycle or public transit, according to the 2019 American Community Survey. That number may be about to increase, thanks to a recently approved citywide active transportation plan.

In June, New Haven released the final draft of its Safe Routes for All Citywide Active Transportation Plan, which makes dozens of recommendations to improve infrastructure for human-powered forms of transportation like walking, biking and scooting, as well to enhance the city’s public transit infrastructure. At a Board of Alders meeting on Tuesday, the alders unanimously approved the plan, bypassing a second reading and approving an application for a $5 million federal grant by September 15.

“It gives us a framework and policy recommendations that help us prioritize the areas of greatest need,” city engineer Giovanni Zinn told the News. “Having this plan in place allows us to be much more competitive for grant dollars… and provides a framework for us to be able to communicate to funders, to residents, to interested parties our plans to create a safer New Haven for all users.”

The plan’s architects hold that active transportation infrastructure has a variety of benefits. These transportation methods are essential for residents who do not own or drive a car, and they improve human health and mitigate climate change, they say. Building safer pedestrian and bicycle infrastructure helps move the city towards Vision Zero, its objective to eliminate traffic fatalities and severe injuries by 2032. Eighteen New Haven pedestrians and two bicyclists died in car crashes between 2019 and 2021, according to the Connecticut Crash Data Repository.

Improved infrastructure will also be more accessible for elderly residents and residents with disabilities, according to advocates of the plan.

In order to achieve these goals, the plan includes recommendations ranging from building 90 miles of new bikeways to installing “leading pedestrian interval” signals that allow pedestrians to cross before cars at all intersections. The plan sets goals to implement improvements to one entire corridor segment per year for the next ten years and to install half of the proposed bikeway network by 2032.

It also creates a structure for focusing investment on highly dangerous intersections and in priority neighborhoods like Dixwell and Newhallville, which are home to low-income residents and communities of color who have historically experienced inequitable health outcomes and limited access to transportation. The project team constructed a database of all 1,566 intersections in New Haven and made maps of existing infrastructure, with detailed designs for improvements at 11 specific locations.

The Safe Routes for All team wrote the plan after multiple public workshops, walkabout surveys and community conversations. They installed temporary pedestrian enhancements, like curb extensions and redesigned crosswalks, as part of the planning process. The plan also comes after years of advocacy by community groups like the Safe Streets Coalition of New Haven.

Ward 1 Alder Alex Guzhnay ’24 told the News that the plan has been broadly popular among alders and residents, whom he described as “really appreciative” of recent improvements like the new contraflow bike lane on Wall Street.

Caitlin Chung ’25 is one such supporter of improved pedestrian and bike infrastructure after multiple unsafe encounters with “really, really funky intersections” in New Haven. She said that she tends to bike within the general vicinity of campus and that she has noticed worse bike and pedestrian infrastructure farther away from Yale. However, she was cautious about whether the plan would lead to significant improvements.

“My understanding is that there have been really comprehensive and, in my mind, good solutions that have been proposed in the past… that are not followed up on,” Chung told the News. “Should this plan be implemented, I would be more than happy.”

Zinn said that the plan is “ambitious” and that there are always challenges with “time and resources,” especially because grant applications are never guaranteed. Individual engineering projects still have to be approved by alders in the relevant wards, with larger projects requiring approval by the entire board.

However, Safe Routes for All may benefit from the millions of dollars of funding that are newly available under the Infrastructure Investment and Jobs Act, which was signed into law by President Biden last November.

“The plan got developed at a really perfect time,” Guzhnay said. “New Haven is one of the few, if not the only, municipalities in Connecticut that already has a plan that they can submit to the federal government to apply for funding.”

Thirty-four percent of intersections in New Haven do not have crosswalks, according to the Safe Routes for All plan.


Sadie Bograd covers City Hall. She is also a producer on the podcast Full Disclosure. She is a first year from Kentucky in Davenport College prospectively majoring in Urban Studies.