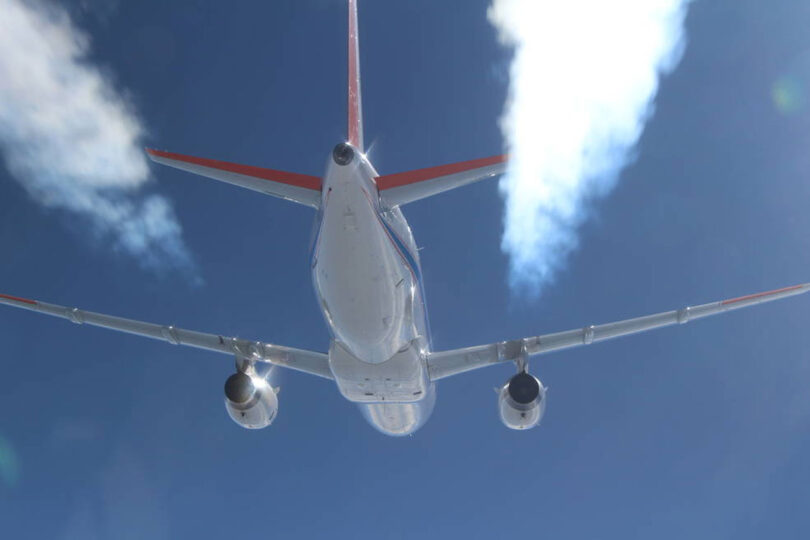 We’ve all looked up the sky and seen commercial aircraft flying overhead, leaving what looks like clouds in the sky, a phenomenon called contrails. NASA has published a new study in cooperation with DLA ATRA aircraft investigating alternative fuels. Cleaner burning jet fuels are made from stable resources and, according to the study, produce between 50 and 70 percent fewer ice crystal contrails at cruising altitude, helping to reduce the impact of aviation on the environment. Ice crystal formations can linger in the upper atmosphere for hours and impact how the earth heats and cools itself.

NASA says that contrails produce localized increases in temperature leading to climate change over time. NASA scientist Richard Moore says that researchers know contrail formation from jet exhaust has a more significant impact on climate than carbon dioxide emissions. The new research shows an opportunity to use alternative fuels to make immediate changes that could help the planet.

Contrails are formed from jet engine exhaust that includes water vapor and soot particles. When the vapor cools, it condenses, forming ice crystals when supercooled water interacts with the exhaust soot or particles that are present in the air naturally. Alternative jet fuels release less soot resulting in fewer ice crystal formations. NASA notes that the crystals that form using alternative fuels are larger, but that doesn’t create the same problem because they fall more quickly and melt in the warmer air below.

Moore says computer models show that contrail ice crystal numbers should vary proportionately with the aircraft engine exhaust particle emissions. Moore also notes that it’s been difficult to observationally make the link discovered in the study. For the experiment, the collaboration used a DLR Advanced Technology Research Aircraft A320 airliner that was burning alternative biofuels. A NASA DC8 flying laboratory trailed the A320 at a safe distance, analyzing and sampling gases and particles in the aircraft’s wake.

The research found that a blend of half biofuel and half regular fuel reduced emissions by as much as 50 to 70 percent. Researchers weren’t able to study contrails because the atmospheric conditions prevented contrail formation.