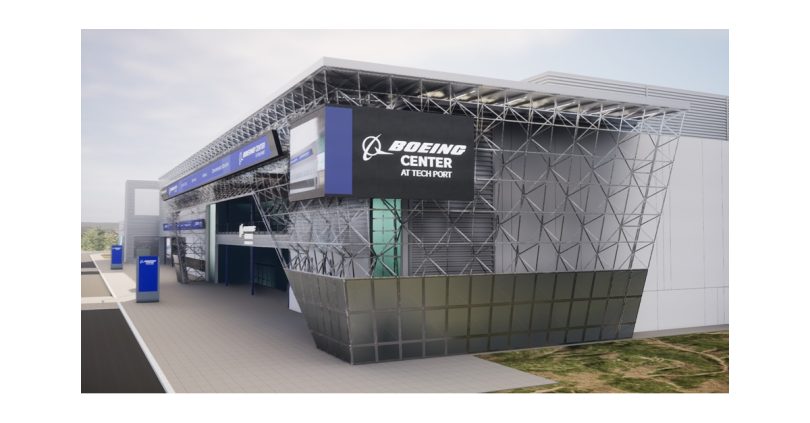 The seven-year partnership and $2.3 million investment will strengthen the region’s STEM talent and enhance programming supported by the foundation, including those developed by the San Antonio Museum of Science and Technology (SAMSAT), headquartered at the Port’s tech campus. In addition to this investment, Boeing has entered into a separate agreement with ASM Global to rename the Tech Port Center + Arena, a 130,000-square-foot multipurpose exhibition center, as the Boeing Center at Tech Port.

ASM Global CEO and President Ron Bension said, “The newly anointed Boeing Center at Tech Port is the only place on earth where entertainment and education intersect in such a bold fashion. Innovators of all ages will connect and create the technologies of the future in dedicated ideation labs and coworking spaces, among other offerings in the facility. And thrill-seekers will light up the Boeing Center at Tech Port, which will host premier e-sports and live entertainment events.”

“Developing a highly skilled, diverse workforce for tomorrow requires an investment in one of Texas’ most valuable assets—students throughout our communities. I’m thankful for Boeing’s commitment to our state and can’t wait to see the next generation benefit from STEM educational experiences that will result from this partnership,” said Texas Gov. Greg Abbott during a ceremony held today at SAMSAT announcing the partnership.

For more than 20 years, Boeing’s aircraft maintenance and modernization operation has been growing at the Port—just a few hundred feet from Boeing Center at Tech Port—furthering its support of an array of military and commercial aircrafts.

The Kelly Heritage Foundation’s support of programming will focus on developing skills that are key to the aerospace and space exploration industries, including robotics, artificial intelligence, three-dimensional printing, virtual reality, cybersecurity, visual sensors and more.

As part of its continued role in the community, Boeing also entered into a separate seven-year agreement directly with ASM Global to sponsor the Port’s 130,000-square-foot multipurpose exhibition center now known as the Boeing Center at Tech Port.

“From the start, our goal has been to find innovative ways to support San Antonio’s development into one of the premier technology communities in the nation,” said Port President and CEO Jim Perschbach. “The Boeing Center at Tech Port significantly furthers our momentum by adding exciting and engaging aerospace-focused learning experiences. We’re thankful that a leading global name in aerospace like Boeing is further growing its deep roots in our community.”

ASM Global is the world’s leading producer of entertainment experiences. It is the global leader in venue and event strategy and management—delivering locally tailored solutions and cutting-edge technologies to achieve maximum results for venue owners. The company’s elite venue network spans five continents, with a portfolio of more than 350 of the world’s most prestigious arenas, stadiums, convention and exhibition centers, and performing arts venues. Follow us on Facebook, Instagram and Twitter. asmglobal.com

The Port is a vast 1,900-acre technology-innovation campus. It is home to a growing array of employers—including globally renowned industry names and a growing number of locally headquartered startups—focused on advancing new technologies in aerospace, cybersecurity, defense, space exploration, robotics and other advanced technologies. Organizations at the Port directly employ over 16,000 people from across the region, yielding a regional economic impact of over $5.6 billion annually. In 2022, the Port became a member of the Association of University Research Parks.

As a leading global aerospace company, Boeing develops, manufactures and services commercial airplanes, defense products and space systems for customers in more than 150 countries. As a top U.S. exporter, the company leverages the talents of a global supplier base to advance economic opportunity, sustainability and community impact. Within Texas, Boeing employs more than 5,730 employees and has an estimated economic impact of $1.6 billion.

Boeing’s diverse team is committed to innovating for the future and living the company’s core values of safety, quality and integrity. Join our team and find your purpose at boeing.com/careers.