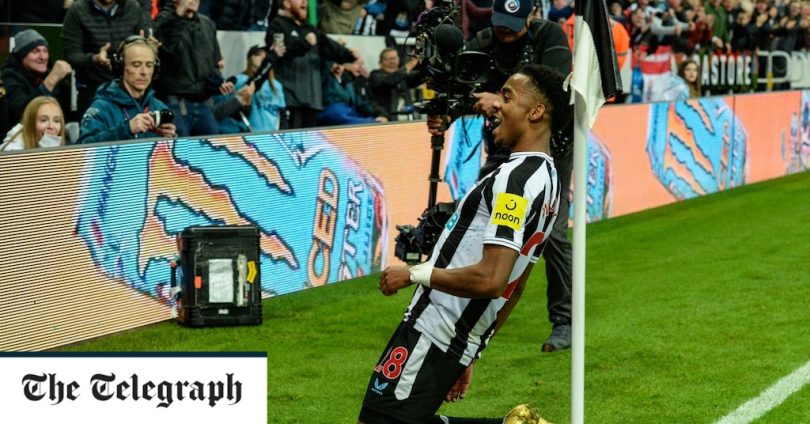 With the clock run down after seven long injury-time minutes, Chelsea still had a throw-in to launch into the penalty area. As Marc Cucarella attempted to take aim, there stood in front of him the figure of Jamaal Lascelles stopping him. Newcastle’s club captain was in a fluorescent bib and not on the pitch as he blocked off a final attempt at an equalising goal.

Some call it the dark arts. Or s—housery, in modern parlance. But in anybody’s language, it was a message that Newcastle are the disruptors of the Premier League. They sit in the Champions League places heading into the mid-season break and belief will grow that they can stay there after this victory against one of the elite they want to replace.

Cucurella took exception to Lascelles and there was pushing between the pair. When the final whistle sounded tempers boiled over. Kai Havertz had to be restrained, Lascelles was now on the pitch and was the focus of anger. Players were pulled apart as Hey Jude rang out from the stands.

Eddie Howe’s side are revelling in their role as underdogs, albeit ones with deep pockets after last season’s Saudi takeover. They were fully deserving of their victory courtesy of Joe Willock’s spectacular winner. The Toon Army, after so many years of disappointment, have yet to taste defeat at St James’ Park this season. They must expect fireworks every time they make the walk from town centre to stadium these days. Howe would probably like to carry on playing, such is the confidence currently going through his team.

For Chelsea, though, the break cannot come soon enough. Graham Potter needs to regroup and find solutions. His team were hit by absences – mainly Raheem Sterling due to illness – and they look short on pace and too defensive. The January window will also be an important time for the new manager.

It was only Cucurella and Havertz, so enraged by Newcastle’s time-wasting, who showed urgency in the latter stages. Before that there was a worrying lack of urgency. Potter must hope that his players had one eye on the World Cup and were holding back. By the end, it was Newcastle who were looking ruthless and streetsmart as they ran down the clock like a top-four team.

“Last season was very different to the one we are experiencing this time around,” said Howe. “We’re enjoying the moment we’re in, everyone fighting the same cause. There is huge commitment, intensity is so high, they were relentlessly playing out from the back and players delivered brilliantly breaking up their play.”

Potter also lost Ruben Loftus-Cheek to injury early in the game and his problems run deep, having lost against Brighton and Arsenal in the Premier League before this reverse.