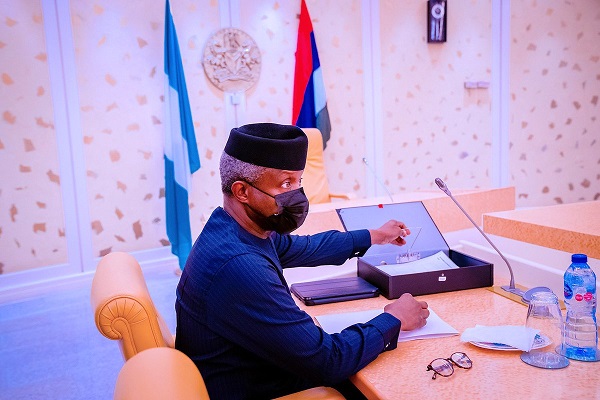 The collaborative efforts of the federal government with the private sector and a civil society group, Convention on Business Integrity (CBI), to curb corruption at the sea-ports has won the first-ever “Outstanding Achievement in Collective Action Award” of the Switzerland-based Basel Institute on Governance.

Senior Special Assistant to the President on Media and Publicity in the Office of the Vice President Mr Laolu Akande, who disclosed this in a statement in Abuja, said the cost of a ship berthing in Nigeria has now drastically reduced from $150,000 per vessel that arrives in the country to about $20,000.

He said the CBi Co-Founder Mr Olusoji Apampa told the Vice President that the success recorded is now attracting international reviews as countries such as Egypt, Ukraine and India are planning to adopt the Nigerian model to produce similar gains in their ports’ operations.

He said the international award recognised the work of the Nigerian MACN, which created a real time-based Help Desk to resolve complaints and concerns of shipping companies as soon as they berth at the ports.

He said the Swiss-based international body also recognized the initiative for the collective action where government, business players and civil societies have worked together for change.

Speaking at the event, the Vice President commended the CBi and the MACN for their efforts, stressing that the President Muhammadu Buhari administration would continue to support initiatives that improve the business environment and economy in general.

“This is cheery news on our anti-corruption efforts,” he said.

He said the narrative on the imperative of integrity and fight against corruption has to be deepened.

“We need to get the attention of the young people also. This is something we have to do,” he said.

Based on the Executive Order 001, the Independent Corrupt Practices and other related Offences Commission (ICPC) conducted a sting operation in 2019 to support government’s ports’ reforms.