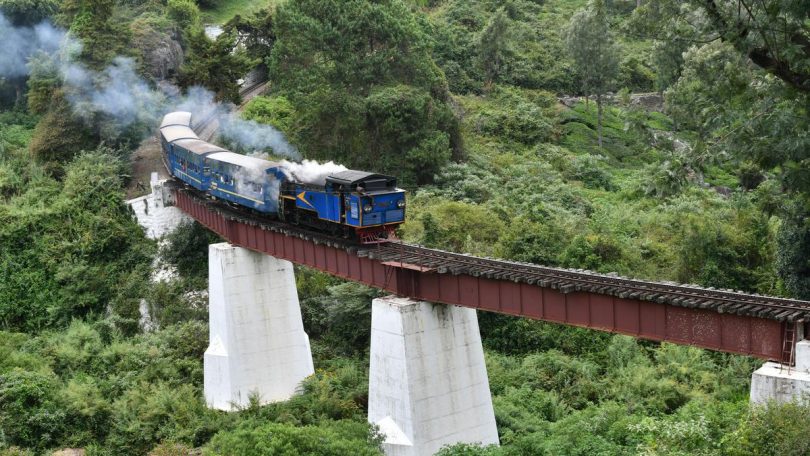 The NMR was declared a World Heritage Site by UNESCO in 2005. The ‘rack and pinion’ mechanism drives the train up the slope for around 19 km of its journey between Mettupalayam and Coonoor.
| Photo Credit: M. SATHYAMOORTHY

Snaking its way up the steep Coonoor slopes, the engineering marvel that is the more than 125-year-old Nilgiri Mountain Railway (NMR) line has become one of the primary drivers of tourism in the picturesque hill district of Udhagamandalam. One of the oldest mountain railway lines in India and among the three mountain railways that still run in the country, the 46.6-kilometre line from Mettupalayam to Udhagamandalam is renowned for its ‘rack and pinion’ mechanism that drives the train up the steep gradient of the Coonoor ghat, says K. Natrajan, heritage train enthusiast and founder of Heritage Steam Chariot Trust.

The ‘rack and pinion’ mechanism drives the train up the slope for around 19 km of its journey between Mettupalayam and Coonoor. “The line is also used by the oldest running coal engine in the world, built in Switzerland in 1914,” he points out.

Declared a World Heritage Site by UNESCO in 2005, the NMR has had more than one rebirth throughout its history, says Venugopal Dharmalingam, honorary director of the Nilgiri Documentation Center (NDC). “The great Indian railway system was originally planned by Governor-General Lord Dalhousie while being on his sickbed in the Nilgiris in 1855. He suggested one strategic line from Madras (Chennai) to the western coast with a branch to the foot of the Nilgiris. Thanks to the perseverance and engineering acumen of the then Superintendent Engineer of Nilgiris, J.L.L. Morant, the link was extended from the foot of the hills to Coonoor and later to Ootacamund [Udhagamandalam] in a feat of rare engineering marvel,” he says.

Mr. Dharmalingam says the system used in the NMR, known as the ABT system, was designed by Carl Roman Abt, a Swiss engineer. It was adopted by 72 mountain railways across the world in the ensuing years. “Currently, the NMR is the only railway anywhere in the world to continue using this system,” he adds. “A metre-gauge track was chosen on account of the hauling time and capacity and to connect the line ultimately with Mysore, which had a similar gauge. The link to Mysore never materialised. Two stations — Mettupalayam and Coonoor — were planned with watering stops at a three-mile interval, based on the water capacity of the engine, at Kallar, Adderley, Hillgrove and Runnymede. The line was then the only one of its kind in India and the second in the world,” he notes.

Over the years, the NMR has been threatened with closure on a few occasions because of the reported losses to the Railways. In 1968, the NMR, along with three other lines, was to be closed as they were reported to be making losses. After much public outcry, the decision was reversed, with Chief Minister M. Karunanidhi assuring the Assembly that the State government would urge the Centre not to scrap the line as “it is an essential amenity for tourists and should not be viewed from economic grounds alone”.

A. Gautam Srinivas, Divisional Railway Manager, Salem, says the operation of the NMR posed certain challenges to the Railways, including procurement of “A-grade coal” for use in the coal-powered steam engines. “We are in the process of procuring the coal needed for use in the engines, and once that is accomplished, the coal-powered engines can be used on special occasions,” he says.

According to officials, almost all the engines along the line are oil-fired, but apart from the fuel used, there is no major difference in the experience that tourists enjoy. “The NMR is a vital source of livelihood in the district as it draws in most of the tourists, including foreign tourists, who visit the Nilgiris,” says Mr. Natrajan of Heritage Steam Chariot Trust.

According to him, the Railways should consider initiatives that will help the line break even. “The NMR is a potential gold mine not just for the Railways but also for the district in general, if managed properly,” he feels.

The Salem Division of Southern Railway has also taken initiatives over the last few years to capitalise on the increase in the interest in the NMR. Even today, tourists like B. Kaushal, from Delhi, who was on a visit, says he wanted his family to experience the mountain railway because of its surge in popularity following “Chaiyya, chaiyya,” a song sequence shot exclusively on the NMR in the Shah Rukh Khan-starrer, ‘Dil Se’, in 1998.

Mr. Srinivas says the Railways is planning to develop a museum to exhibit the NMR history and significance. To give tourists a taste of the NMR during the peak tourist season, the Railways has also introduced shorter trips, called “joy rides”, between the Udhagamandalam and Ketti, while introducing a newly manufactured coal-powered engine, the first of its kind to be produced in India.