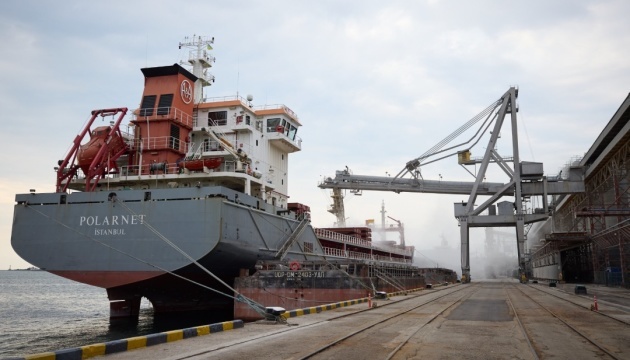 Nine ships loaded with 162,000 tonnes of Ukrainian-produced agricultural products for African, Asian and European countries have left the Odesa region’s ports over the past two days.

The relevant statement was made by the Ukrainian Infrastructure Ministry on Facebook, an Ukrinform correspondent reports.

“In particular, the bulk carrier BOZBURUN-M, carrying 40,000 tonnes of wheat, has left for Ethiopia today. It is the eight vessel to have been chartered as part of the UN World Food Programme, providing assistance to African and Asian countries,” the report states.

Twenty-six vessels are now being handled at the Odesa region’s ports. They are being loaded with 1 million tonnes of Ukrainian-produced agricultural products.

Since August 1, 2022, a total of 475 vessels have exported 11.2 million tonnes of Ukrainian-produced agricultural products from the Odesa region’s ports to Asian, African and European countries.

A reminder that, on November 17, 2022, Ukraine, the United Nations and Turkey agreed to extend the Black Sea Grain Initiative for a period of 120 days. Initially, it was launched on July 22, 2022, and the first vessel left the Odesa region’s port on August 1, 2022.