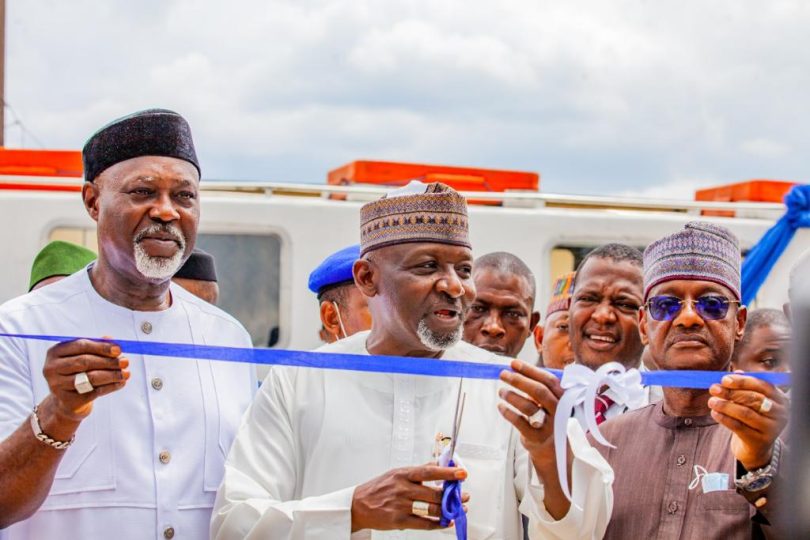 The Nigerian Inland Waterways Authority (NIWA) says huge opportunities in the nation’s waterways can be maximised if there are infrastructure and proper funding.

The Managing Director, NIWA, Dr George Moghalu, said this in a statement made available to newsmen in Lagos on Saturday.

Moghalu said this during the facility tour and commissioning of the newly acquired two patrol boats (PB-Gusau and PB-Jalingo) and a 32-seater passenger ferry boat by the Minister of Transportation, Mu’azu Sambo, in Port Harcourt.

According to him, infrastructure and funding will make the waterways attractive and competitive to players.

He also said that there was need for a regulatory framework aimed at actualising this, which ultimately would take the cost of providing infrastructure on roads to water at relatively cheaper cost.

“As you may be aware, in less than a year ago, the authority commissioned more than 20 patrol boats and a tugboat, houseboat and water ambulance for distribution to various area offices.

“This is part of the authority’s vision to ensure that the nation’s inland waterways provide a truly safe, efficient, cost effective and alternative mode of transportation of goods and persons as well as become competitive and attractive.

“The network will connect the creeks and the rivers with the economic centres using the river ports as nodal points for intermodal exchange,” he said.

Moghalu noted that consequently, NIWA had licensed several companies for transportation of cargo across the waterways, especially from Lagos and Onne Ports to the hinterlands and vice versa.

“To achieve more of these, the authority is poised to continuously ensure the development of indigenous manpower and provide navigational aids, river training works, wreck surveys and removal, establishment of river gauges.

“Others are construction of jetties, capital and maintenance dredging, establishment of search and rescue stations, river craft certification, training of boat drivers and crew as well as continuous safety sensitisation campaigns.

In his response, Sambo said that the ministry was set to frontally tackle the challenge of channel insecurity which had slowed the growth of the Eastern Ports.

”This will be done by deploying assets of the Deep Blue project and the renewed synergy between the Nigerian Ports Authority (NPA) and the Navy.

“The recent growth in vessel traffic in Onne Port, especially for exports is a testament to the strategic importance of the Eastern Ports in supporting the renewed export orientation of the President Muhammadu Buhari administration.

“The recent establishment of an Export Processing Terminal at Onne Port by Messrs WACT is highly commendable. I will like to also appreciate Brawal for the timely support provided the NPA at crucial times,” he said.

The minister said that most of the challenges of aging infrastructure and allied matters raised in previous stakeholder engagements with the NPA management had been brought to his attention.

He gave the assurance that the government was working assiduously to provide measurable solutions as quickly as possible.

“Let me reiterate that the Federal Ministry of Transportation will expeditiously review all concession agreements and ensure strict compliance with the terms by the NPA and concessionaires,” he added. (NAN)