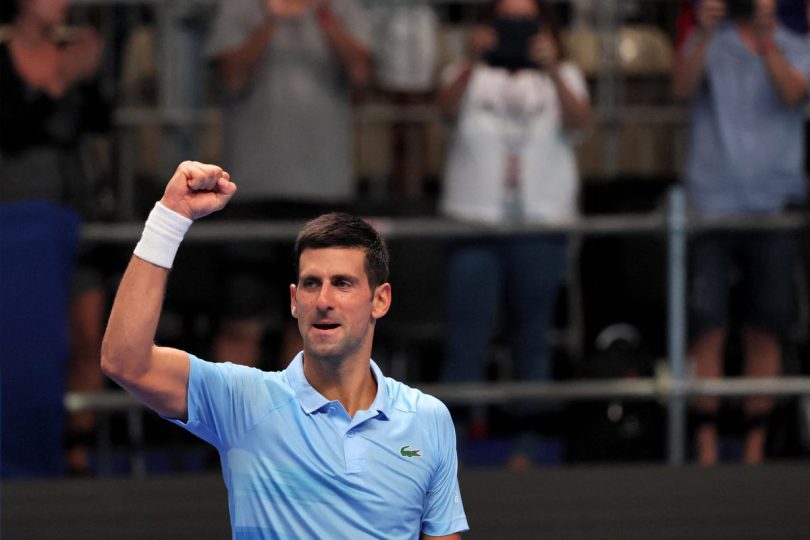 Novak Djokovic is back in the winner’s circle.

Playing in his first tour event since winning Wimbledon this summer, the 35-year-old Serb and top seed defeated No. 2 seed Marin Cilic 6-3, 6-4 on Sunday to clinch the Tel Aviv Watergen Open trophy. The 21-time Grand Slam champion did not drop a set en route to the 89th title of his career, trailing only Jimmy Connors (109), Roger Federer (103), Ivan Lendl (94) and Rafael Nadal (92).

With the victory Djokovic became the first man to win a title on hard, clay (Rome) and grass courts this season. He has won 20 of his last 21 official matches, with the only loss coming to Nadal in the Roland Garros quarterfinals.

“My approach is to win tournaments wherever I am and I’m glad that I have a team of people around me that makes sure that I am in the best shape in order to be a contender to win titles,” Djokovic said. “That’s why I came to Israel, was to try to win the title. First time playing here [since a] Davis Cup tie more than 15 years ago, so it was a really amazing experience.”

Djokovic is now ranked No. 7 in the world because he did not garner points from winning Wimbledon after the ATP stripped the event of points after Wimbledon officials banned Russian and Belarusian players.

He did play last week at the Laver Cup in what was Federer’s farewell event, where the Serb lost to Canadian Felix-Auger Aliassime in straight sets after destroying U.S. Open semifinalist Frances Tiafoe. Team World beat Team Europe in the event, giving captain John McEnroe his first victory over his rival, Team Europe captain Bjorn Borg.

Djokovic did not lose a set at the indoor hard-court ATP 250, where he was never in difficulty against a lineup of dangerous opponents. The 35-year-old claimed his third tour-level crown of 2022.

“I played some very good tennis, I think. I [didn’t] drop a set the entire week,” Djokovic said. “I hadn’t played a tournament in three months, so it was really extra motivation for me to really do well, particularly because people have been so friendly and so supportive of me throughout the week. I’m taking some great confidence into next week as well.”

Cilic faced just four break points entering the final, but Djokovic consistently threatened his opponents’s serve from the back of the court, while he dominated his own service games behind his first serve. The Serbian did not face a break point in the first set and when he found himself in trouble at deuce while serving for the set, he responded with back-to-back aces.

The top seed then broke for the second time in the match to start the second set, with a deep return again paying dividends. That advantage proved to be enough as Djokovic claimed the crown after one hour and 35 minutes.

Djokovic now leads Cilic, the 2014 U.S. Open champion, 19-2 all-time. Thirteen of his 19 victories against the former world No. 3 have come in straight sets. Despite the loss it was a good week for Cilic, who celebrated his 34th birthday on Sept. 28.

“It was a fantastic week for me celebrating my birthday,” Cilic said during the trophy ceremony. “I didn’t have a chance to celebrate with so [many people before], but next time I’m buying drinks everybody!”

Djokovic will next head to the Astana Open next week in Kazakhstan, and also plan sto play the Paris Indoors at the end of the month. He is also slated to play in the new World Tennis League in Dubai in December.