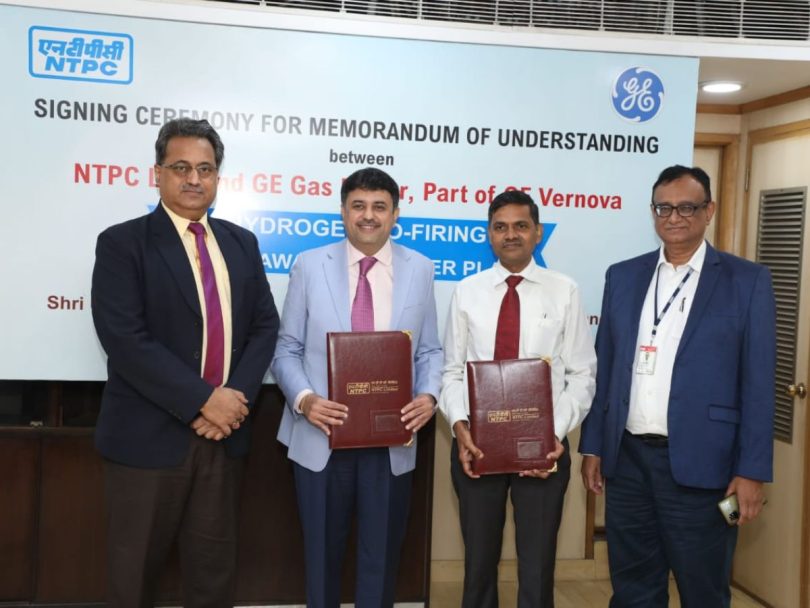 : In a first-of-its-kind MoU with NTPC in India, GE Gas Power and NTPC will collaborate for feasibility to reduce carbon intensity at NTPC’s Kawas gas power plant in Gujarat

NTPC’s Kawas gas power plant is powered by four GE 9E gas turbines operating in a combined-cycle mode and has an installed capacity of 645 megawatt (MW). Further, GE’s advance E- Class gas turbine portfolio currently has the capability to burn up to 100% by volume of hydrogen when blended with natural gas. This capability varies depending on the type of combustion system used. For fuels with over 5% hydrogen by volume, gas turbine accessories need to be evaluated and possibly modified to reliably deliver the fuel to the combustors.

In this first-of-its-kind MoU with NTPC in India, GE Gas Power will evaluate the possible modifications in the gas turbine unit and auxiliaries required for blending of H2 with natural gas. Thereafter, a pilot project for 5% Co-firing of hydrogen may be implemented at the Kawas gas power plant in a safe environment based on the feasibility report. NTPC shall provide H2 required for the project.

“NTPC, with a large fleet of power generation facilities delivering more than 70 GW across India, has been at the forefront when it comes to piloting new hydrogen-related initiatives. NTPC is committed to playing a key role in India’s energy transition journey as the country marches ahead to achieve net-zero target and climate goals. In parallel, it’s crucial to invest and effectively utilize the proven technology that can generate electricity, which is affordable, accessible and reliable. This MoU is among the steps we are taking in the direction to meet the objectives under the National Hydrogen Mission. As our collaboration with GE grows deeper, we are more focused to use advanced technology and leverage our gas power assets with higher percentage of zero-carbon fuels such as H2, as the availability of the fuel becomes viable.” said, Shri Ujjwal Kanti Bhattacharya, Director (Projects), NTPC Ltd.

“India’s power landscape is strengthened by the emerging technologies that are at various stages of development and industrial competitiveness. Hydrogen has a significant potential to play a complementary role along with other low-to-zero carbon fuels in generating electricity at scale. We applaud NTPC’s leadership, commitment and investment in hydrogen that can further set new industry benchmarks in terms of discovering low-cost hydrogen industry going forward and achieving energy self-reliance.” said Shri Deepesh Nanda, CEO, GE Gas Power South Asia.