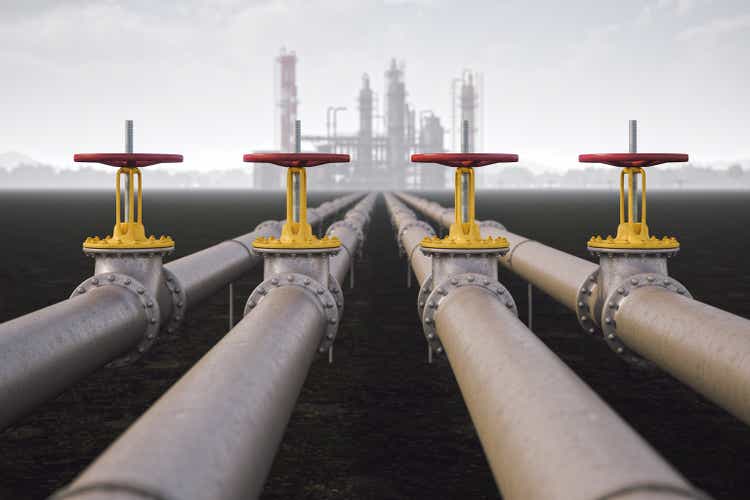 I’ve been asked my opinion on Occidental Petroleum (NYSE:NYSE:OXY) quite often as of late, particularly because I have an Avoid recommendation on the stock internally on my Marketplace service. To be clear, that negative view does not mean that I think that Buffett’s likely macro view on oil and gas – that there structural, long term upside in the commodities – is wrong. But, I do think there are reasons that Buffett is investing in Occidental that don’t apply to everyday investors; investors that actually have an advantage over the King of Omaha: flexibility. Rather than mirroring Buffett’s picks, I think it makes better sense to take lessons from one of the best when it comes to making multi-decade calls on undervalued industries and apply that to other pockets of value in the energy sector.

Buffett Going All In?

In the middle of July, Berkshire filed a request with FERC to have the ability to accumulate up to 50.0% of Occidental Petroleum. The filing was necessary because various assets that Occidental owns are regulated by FERC and thus need government approval for an outside investor to increase its stake. That request was subsequently approved last month, and investors have followed Buffett into this stake, sensing a takeover. Occidental has substantially outperformed the majority of its peers this year, nearly all of which has likely been because of Buffett involvement rather than incredible performance operationally or against earnings estimates.

While many analysts have speculated that Buffett could take it all in, making Occidental a wholly-owned subsidiary under the Berkshire (BRK.A) (BRK.B) umbrella, I just don’t see it. While there are clear benefits given Berkshire’s cost of capital and offsetting commodity risks elsewhere in the Berkshire portfolio, I just don’t envision Buffett as viewing this as worth the risk. Many of the firms that Berkshire takes over have operational or commercial synergies or strong benefits from shifting management or otherwise doing internal restructuring; Occidental does not fit that.

To me, Buffett has a long term constructive view on oil. Occidental makes sense as a way to express that. Recall Buffett’s quote when he initially built a stake in Occidental in the wake of its Anadarko acquisition, with the company seeking out Buffett as a source of capital via a $10.0B preferred stock investment:

If you own Occidental you are bullish on oil over the years … You are probably bullish the Permian basin, given they have such a large position there… It’s a bet on oil prices over the long term more than anything else.

So why Occidental? Number one, there is already comfort with management and knowledge of their business and operations because of that preferred investment. Number two, right now, Buffett owns a near $18.0B stake in Occidental, with potential for that to move up further over time given the filing. That is more than the market cap of most of the entire upstream space right now, and really the only comparable that is not a supermajor is EOG Resources (EOG) as far as trading liquidity is concerned. EOG also comes without the chemical and carbon capture businesses that I think Buffett appreciates at Occidental. As he’s famous for large, concentrated bets and picking one horse to bet on (or in this case two alongside Chevron (CVX)), the list is short for investment. If this is all about making a wager on oil and gas pricing over the next ten, twenty, or thirty years, Occidental is really his only option other than buying up a bunch of smaller companies and taking them private. That’s not his M.O.

We aren’t Buffett though. We have the luxury of being able to invest in small or mid caps and can enter / exit positions in a matter of seconds – not weeks or months like Berkshire. And, while there are some mitigating factors to the below like reserve life, leverage, break-evens, and sum of the parts value from non oil and gas production businesses, there is no question that Occidental skews expensive versus peers:

Smaller investors should combine the macro with micro. Macro value on its own is great, but micro adds the proverbial cherry on top when it comes to potential return. While I think the involvement of Buffett could continue to pressure Occidental higher, especially given the short interest, recent relative outperformance probably limits that upside.

At current strip prices, I see a lot of value in oil and gas names in both the United States and Canada. It’s unavoidable that investors have to have that constructive mindset to get involved this industry. But, the nuance that investors have to focus on right now to get it right excludes Occidental as the best or greatest option in my opinion. With so many companies committed to meaningful shareholder returns right now, sitting at a better leverage profile, and having just as good of an outlook when it comes to inventory or break-evens, it just makes sense to shop elsewhere. There are lessons to be learned from Buffett’s move, but a straight up copy and paste isn’t the right one I believe.