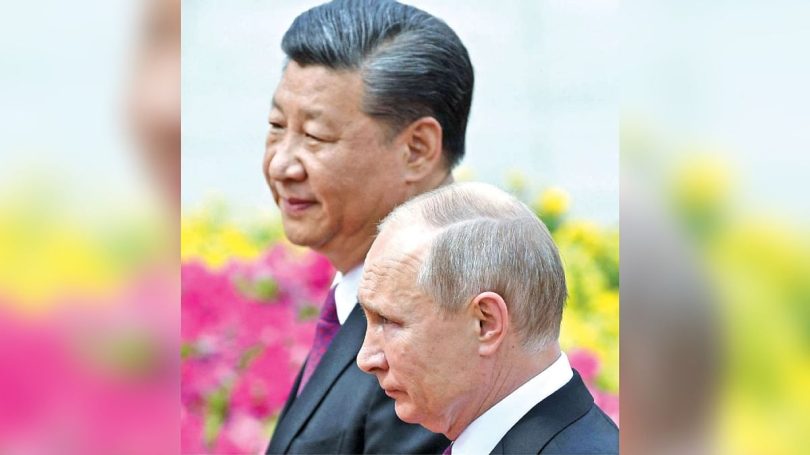 CHENNAI: According to a new NBC News poll, U.S. voters now consider “threats to democracy” the most important issue facing the nation, which is both disturbing and a welcome sign that people are paying attention. It’s also worth noting that this isn’t just an American issue. Democracy is eroding worldwide; according to the latest survey from the Economist Intelligence Unit, there are now 59 fully authoritarian regimes out there, home to 37 percent of the world’s population. Of these 59 regimes, however, only two — China and Russia — are powerful enough to pose major challenges to the international order. The two nations are, of course, very different. China is a bona fide superpower, whose economy has by some measures overtaken the United States’. Russia is a third-rate power in economic terms, and events since Feb. 24 suggest that its military was and is weaker than most observers imagined. It does, however, have nukes.

One thing China and Russia have in common, however, is that both are currently running very large trade surpluses. Are these surpluses signs of strength? Are they evidence that autocracy works? No, in both cases the surpluses are signs of weakness. And the current situation offers a useful corrective to the common notion — favored, among others, by Donald Trump — that a country that sells more than it buys is somehow a “winner.” Start with Russia, whose trade surplus has ballooned since Vladimir Putin invaded Ukraine. What’s that about? The answer is that it’s largely a result of Western economic sanctions, which have been surprisingly effective — albeit not in the way many expected. When the invasion began, there were widespread calls for an embargo on Russian exports of oil and gas. In reality, however, Russia has had little trouble maintaining its oil exports; it is selling crude at a discount, but high global prices mean that plenty of money is still coming in. And while there has been a sharp fall in Russian gas exports to Europe, this reflects the Putin regime’s efforts to put pressure on the West rather than the other way around.

What sanctions have done, instead, is undermine Russia’s ability to import, especially its ability to buy crucial industrial inputs. One example of the problem: Reports indicate that Russian airlines are grounding some of their planes to cannibalise them for spare parts they can no longer buy abroad.

So Russia’s trade surplus is actually bad news for Putin, a sign that his country is having trouble using its cash to purchase goods it needs to maintain its war effort.

China’s problem is different: Its trade surplus is a result of long-running internal problems that may, finally, be coming to a head.

Outside observers have long noticed that too little of China’s national income filters down to the public, so that consumer spending has remained weak despite rapid economic growth. Instead, the nation has maintained more or less full employment by channelling cheap credit into increasingly unproductive investment spending, above all a bloated housing market supported by ever-growing private debt. China has managed to keep this ultimately unsustainable game running for a remarkably long time. At this point, however, China’s housing market appears to be crashing and consumer demand appears to be plunging. This is dragging down the country’s imports — which makes its trade surplus bigger. Again, a surplus can be a sign of weakness, not strength. Two more points about China. First, its economy is also suffering from the government’s refusal to revisit a failing Covid strategy, relying on relatively ineffective domestic vaccines and a disruptive policy of draconian lockdowns to contain the pandemic.

Second, under current conditions, weak Chinese demand is, unintentionally, a boon to the rest of the world. A dozen years ago the world economy was suffering from inadequate demand, and Chinese trade surpluses made the problem worse by sucking purchasing power away from the rest of the world. Today, however, the world economy is suffering from inadequate supply, which has led to high inflation in many countries. In this context Chinese weakness is actually good for the rest of us: Falling Chinese demand is putting a lid on the prices of oil and other commodities, reducing global inflationary pressure.

So what can we learn from dictators and their trade surpluses? As I said, we’re getting a demonstration that exporting more than you’re importing doesn’t mean that you’re winning: In different ways both Russia’s and China’s trade surpluses represent failure rather than success. And at a broader level, we’re seeing the trouble with dictatorships, where nobody can tell the leader when he’s wrong. Putin seems to have invaded Ukraine in part because everyone was too afraid to warn him about the limits of Russian military power; China’s Covid response has gone from role model to cautionary tale, probably because nobody dares tell Xi Jinping that his signature policies aren’t working. So autocracy may be on the march — but not because it works better than democracy. It doesn’t.

Krugman is an Opinion Columnist with NYT©2022