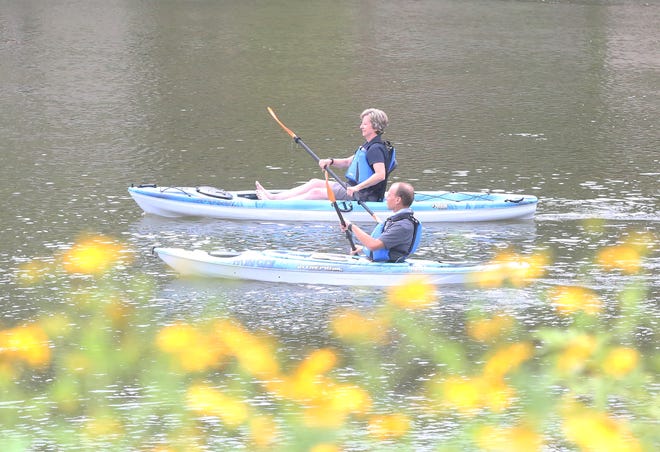 As fall sets in across Ohio, many Ohioans might be thinking about squeezing in one final getaway before the weather turns for good.

The good news is there are plenty of great vacation gems right here in Ohio, including the Muskingum Watershed Conservancy District. The district features a variety of outdoor recreational opportunities, such as camping, cabin rentals, boating, boat rentals, fishing, hiking and hunting on more than 57,000 acres of land across eastern and southeastern Ohio.

Nearly 5 million visitors enjoy the benefits of the district’s lakes on an annual basis.

Over the past decade, the Muskingum Watershed Conservancy District has been executing a significant renovation plan to its campgrounds and marinas, which had no major redevelopments or upgrades since their construction over 50 years ago.

The first phases of improvements, to the tune of $130 million, helped construct six new campgrounds and renovate 13 existing camp areas. They are now wrapping up additional phases that include additional infrastructure improvements and amenities that will raise their investment to almost $200 million.

What has made this massive transformation possible? The district understood the value of its land and the potential of the natural resources right under its feet.

The Muskingum Watershed Conservancy District has been able to creatively work with oil and natural gas producers to monetize these resources so that all Ohioans can benefit from the oil and gas leases the district negotiated.

District leadership was able to look ahead and view the possibilities during Ohio’s shale revolution, while at the same time ensuring these natural resources are and will remain protected for future generations to enjoy. In 2019, the district Board of Directors and executive staff followed recommendations to commit $40 million in reserve funding along with 50% of Utica shale royalties for the next four years to implement Phase 2 of the plan.

A project like this could not have been dreamed of a decade ago.

What the district has accomplished can serve as an example for the entire state. All across Ohio, public property owned by state and local governments sit idle while a valuable natural resource that can provide steady revenue to these entities goes unused.

Due to smart leadership and common sense, the district has maximized its property and provided the blueprint to ensure that oil and gas drilling can work together with public lands for the betterment of all Ohioans. These continued partnerships will allow Ohio to utilize its vast natural resources, while at the same time secure investments that are put to work right here at home.

Furthermore, these lease agreements support Ohio families by driving down the price of energy and by funding improvements in the state’s recreational and tourism industries.

Ohio is sitting on one of the largest natural gas fields in the world. At a time when families are grappling with runaway inflation, being able to access these resources on state and public lands is more critical than ever in order to lower costs of everyday necessities. As the partnership with the Muskingum Watershed Conservancy District illustrates, Ohio has an opportunity not only to help solve the energy and inflation crisis, but also to ensure that Ohioans share in the benefits.

Ohio’s natural gas and oil industry takes pride in its work to provide abundant, affordable energy to communities across the state and country. This important work is done safely, responsibly and in a way that preserves Ohio’s beauty and natural resources.

Rob Brundrett is president of the Ohio Oil and Gas Association.