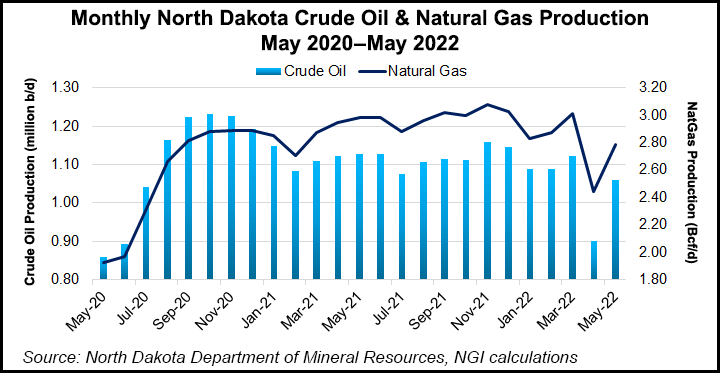 North Dakota had 42 active rigs as of Tuesday (July 19), which also was the monthly average for June. This is up from 40 in May and 38 in April, according to the state’s Department of Mineral Resources (DMR).

The number of active fracturing crews stood at 18, up from 16 a month earlier, but below the pre-covid number of 25.

Permitting “continues to rise, as does the rig count,” DMR Director Lynn Helms told reporters on Tuesday. “So those are both major positives for the industry.”

The industry, however, is “still really struggling to find [a] workforce.”

To maintain a slow and steady pace of production growth in North Dakota, 50-55 active rigs and 20-25 hydraulic fracturing crews would be ideal, said Helms. The Permian Basin of West Texas and Southeastern New Mexico, for example, is far outpacing North Dakota’s Williston Basin in terms of incremental drilling and fracturing activity, Helms noted.

Oil and natural gas production in North Dakota mostly recovered in May after back-to-back snowstorms in April severely curtailed output.

In the Bakken Shale, which accounts for 96% of North Dakota’s oil output, the Energy Information Administration is forecasting natural gas and oil production to rise by 31 MMcf/d and 19,000 b/d, respectively, in August versus July.

On a positive note for consumers, Helms highlighted that U.S. oil storage volumes, while still at historic lows, have at least crept back into the five-year average range, while gasoline prices have dropped by about 50 cents nationally over the last month.

He criticized the Biden administration, however, for a lack of federal oil and gas lease sales held by the Department of the Interior (DOI).

Through one of these sales, the Montana/Dakotas office of DOI’s Bureau of Land Management sold 19 parcels for $7.35 million.

However, the leases have not yet been issued, due to a lawsuit by environmental groups challenging the resumption of federal leasing by the administration. Helms said he expects North Dakota to intervene in the case.

DOI “has indicated that they may postpone the remaining lease sales for this year, based on this lawsuit,” Helms said.

As a result, he said, “I would say the probability is pretty high that the remaining 2022 lease sales will not take place.”

The North Dakota Industrial Commission, which oversees DMR, believes “there isn’t near enough leasing going on to keep our production stable and to develop the resources we have on our federal lands, and so we’re going to continue to push in every way that we can to move that forward,” Helms said.